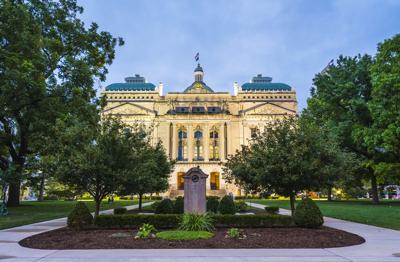 ''Organization Day Tuesday was quickly overtaken by COVID-19 as Democratic lawmakers fought for a mask requirement for the House, two Republican legislators pushed to terminate the public health emergency, and another representative announced that she had been exposed to someone who has tested positive for COVID-19.

During House Minority Leader Phil GiaQuinta’s virtual press conference following adjournment, state Rep. Robin Shackleford, D-Indianapolis, said that her sister tested positive for COVID-19 and had just contacted her about it. Shackleford said it was an example of the unexpected nature of the virus and showed why the legislature needed to set procedures related to COVID-19.

Organization Day is usually routine, with newly-elected members and leadership being sworn into their positions and then dismissing until the regular session begins in January. But the ongoing COVID-19 pandemic created new challenges for lawmakers as they maintained a social distance from each other while conducting the business of the General Assembly.

In the House, after members were sworn in, Rep. Matt Pierce, D-Bloomington, proposed an amendment to the House rules that would require all representatives to wear masks or face punishment. Everyone wore a mask except newly-elected Rep. John Jacob, R-Indianapolis, and Rep. Curt Nisly, R-Milford.

The resolution read:  “A member refusing to comply shall face the remaining members who will determine whether a fine, censure, or other penalty should be imposed.”

The resolution failed to pass, but it is recommended that legislators wear masks or face coverings.

Jacob and Nisly were also the co-authors of the resolution to terminate the public health emergency order issued by Holcomb. The resolution was not discussed or voted on publicly, and House Speaker Todd Huston said it would be discussed further at a later date.

After the Senate concluded its opening day activities, Senate President Pro Tempore Rodric Bray, R-Martinsville, said that the legislative session will include some revisions to the governor’s powers to declare a state of emergency.

“Those powers were drafted contemplating tornados, a fire, an earthquake or things of that nature that are short term issues,” Bray said, adding that it was never anticipated that an emergency would last more than six months.

The emergency public health orders that Gov. Eric Holcomb put in place has been extended repeatedly since March as the number of COVID-19 cases continues to rise.

COVID-19 won’t be the only issue that lawmakers will be facing in the 2021 session, when the state’s two-year budget will be written. Huston, in a press conference after the session, said other issues include rural broadband, public health, infrastructure development, and K-12 and higher education.

Bray said maintaining funding for school is a priority, but added that lawmakers won’t make final decisions until after the revenue forecasts in December and April.

He also said there is a team working on the issue of teacher pay and they are trying to combat the teacher shortage in Indiana.