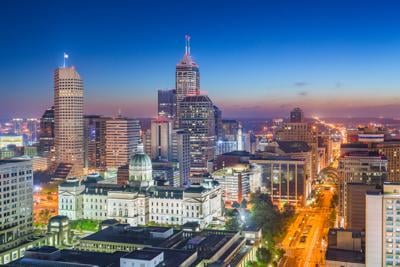 Among the findings of the report “Displaced in America,” released by New America on Sept. 9, is that the housing loss rate in Marion County is 2.4% higher than the national average. New America’s policy recommendations for relieving housing instability and displacement are also detailed in the report.

Indianapolis Recorder editor Oseye Boyd and NUVO managing editor Dan Grossman will help facilitate a discussion on the report that will take place Sept. 15 on Zoom, and they will ask questions regarding the research findings and recommendations.

The report invites comparison to other cities facing housing crises —   Phoenix, AZ. and Winston-Salem, N.C. — which are also examined in detail. The report also provides a heat map on housing loss on the county level nationwide and provides a new national housing loss index.

For Chambers, who is a doctoral candidate in American Studies at IUPUI, one of the most surprising —   and heartbreaking —   findings is the fragility of housing among many of Marion County’s low-income renters.

“The housing environment all but entirely ensures that people who already struggle will continue to do so,” she said.

That is because renters may already live in or at the cusp of housing instability.

“A disruption in income from any number of surprises, such as a medical emergency, car repair, or job loss, can send a family spiraling,” she said. “One eviction can make it difficult to secure new housing and force a family to settle for substandard housing, which is a rampant, unmitigated issue in Indianapolis and which can have real, negative mental and physical health outcomes for residents.”

Chambers notes that housing instability can last for years, if not a lifetime and can be passed down generationally.

“Housing-related problems in Indianapolis are systemic and must be addressed through policy, not only at the city level but also at the state level, where heavy-handed preemptions make it hard for cities to address their own challenges,” she said.

Chambers became involved in the “Displaced in America” project while working as a fellow with New America, and while working on her doctorate at IUPUI. The report’s focus on Marion County was spurred by Eviction Lab’s analysis showing that Indianapolis has one of the country’s highest eviction rates.

The Washington D.C.-based team of researchers with New American’s Future of Property Rights program needed Lynn because she provided  “boots on the ground” for them, she said.

“Since I live here in Central Indiana (Zionsville) and was capable of carrying out the type of qualitative research that would add important context to the quantitative data that was being gathered by the D.C. team, I interviewed 31 people who shared their expertise and personal experiences related to housing instability and displacement,” Chambers said. “These interviews helped researchers interpret the quantitative data and guided recommendations on how leaders can address Marion County’s problematic housing environment to create more balance, especially among the most financially vulnerable residents.”