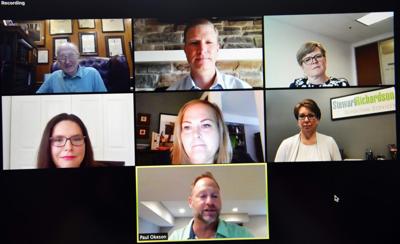 The Indiana Election Commission voted against a proposal to allow no-excuse absentee voting in the November general election because of the COVID-19 pandemic, which continues to spread with few signs of slowing.

At the commission meeting Friday, which was held virtually, the four members were divided along party lines. Republicans Paul Okeson, chair of the commission, and Zach Klutz voted against a proposal by commission Vice Chair Anthony Long, a Democrat, to allow voters to cast absentee ballots without an excuse on Nov. 3. Fellow Democrat  Suzannah Wilson Overholt joined Long in voting yes. A tie vote means the issue is defeated.

Long had added an amendment to a proposal by Okeson to allow county election officials to purchase letter opening machines to handle what is expected to be a large number of absentee ballots in the November election. More than 37,00 voters have already requested absentee ballots this year, up from a few hundred at this point in past years. Okeson’s motion also died in a 2-2 party-line tie.

Long, supported by Overholt, argued that the number of COVID-19 cases now is even higher than it was in the spring when commission members voted unanimously to allow no-excuse absentee voting in the primary, which was delayed until June 2 because of the pandemic.

Long said he has been on the commission for more than 20 years, and he’s never seen anything like COVID-19, adding that this is an emergency that calls for a change to voting practices as soon as possible. He added that he was bothered that Gov. Eric Holcomb isn’t acting on the issue.

“Time is really critical here,” Long said. “I’m truly disappointed that he’s not taking the lead on this.”

Although voting sites will be using personal protective equipment and implementing safety requirements like the mask mandate, voters will still be at risk because the virus is strengthening, he argued.

“We have absolutely no credible assurance that this is going to be abated by Nov. 3,” Long said.

The number of COVID-19 cases have remained high and on Friday, the Indiana State Department of Health reported that 1,079 Hoosiers were diagnosed with COVID-19 for a total of 78,632. Eight more people have died from the virus for a total of 2,906.

Okeson argued that policy changes like absentee voting requirements need to be made by the General Assembly.

“We tend not to be a law-making or policy-making body, and a lot of this seems to me to be things that need to be rationalized and dealt with on the third floor of the statehouse,” Okeson said.

Klutz said conditions that led to the commission’s emergency actions in the spring no longer exist.

“Those modifications to the election procedure were done immediately after the stay-at-home order was issued by the governor,” Klutz said. “We’re still are dealing with the pandemic, but the factors have changed…We are now in stage 4.5 of a five-stage back-on-track plan.”

Holcomb, at his weekly COVID-19 press briefings, has said that Hoosiers will have plenty of opportunities to vote safely in person because of early voting options that will be available.

Holcomb, Secretary of State Connie Lawson and the commission are facing mounting pressure to allow no-excuse absentee voting in November. Most other states allow some form of mail-in voting.

The state is facing three separate court challenges. One lawsuit wants the court to allow no-excuse absentee voting, a second argues the noon deadline to receive absentee ballots disenfranchises voters, and a third says Hoosiers are being purged from voter rolls without enough notice.

The Democratic candidates said it is important to elect a government that reflects the will of its people, not just the will of those willing to risk health and safety to cast a ballot in person.

John Zody, chair of the Indiana Democratic Party, said, “It’s a disgraceful abdication of leadership. The history books will not reflect kindly on their decision to put politics ahead of public health.”

Unless no-excuse voting is allowed, only registered voters who fall into certain approved categories can vote by mail: Those who lack transportation to the polls, sex offenders, military or public safety officers, those over age 65 or those with a disability. Additionally, anyone who for all 12 hours that the polls are open are out of the county, confined by illness or caring for an ill person, or has election duties outside of their precinct or works can apply.