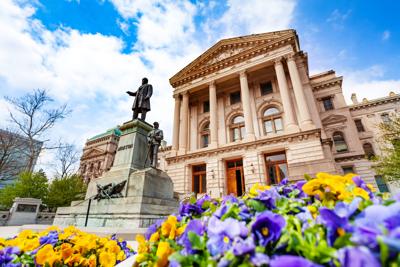 A new study says Indiana’s 2011 redistricting favors one party over the other, creating an unequal representation of its citizens. In it, a national expert on gerrymandering deems the act as “bad for democracy,” a claim state Republicans deny.

Rima Shahid, executive director of Women4Change, said the organization pushed for this study due to redistricting in Indiana coming up soon and hopes it gives the public insight into an issue that will affect the state for the next 10 years.

The way districts are currently drawn “gives the controlling [Republican] party a disproportionate legislative supermajority that can ignore any input from the minority party [and] as a result, new laws make no allowance for the wishes of one party’s vote,” Shahid said.

“So it’s one party that’s really able to control the bills and the number of bills that pass through and then essentially become laws. We have an overwhelming supermajority.”

“Indiana’s legislative maps are some of the most fairly drawn in the entire country. For years, the Democrat party has used unsubstantiated claims of gerrymandering to deflect from the fact that Hoosiers have rejected Democrat candidates at the ballot box year after year,” Indiana Republican Party Chairman Kyle Hupfer said in a statement to The Statehouse File.

“For nearly two decades, Hoosiers have trusted Republican leadership from the courthouse to the Statehouse. Indiana Republicans hold every statewide elected office in Indiana, supermajorities in both houses of the General Assembly, both U.S. Senate seats, 71 mayoral offices and 88% of all county elected positions. The sustained success of our party is due to our policies, our candidates, our volunteers and the support we’ve earned in every corner of the state.”

Redistricting happens every 10 years after the U.S. Census is completed and published. However, due to COVID-19, the results were delayed, pushing back Indiana’s district line mapping.

Dr. Chris Warshaw, the study author, said he was surprised by what he characterized as the extreme partisan bias of the state.

“The problem with gerrymandering is that, if one party has a lock on power, no matter how many votes they get, that’s bad for democracy, [It] means they don’t have to be responsive to what the public wants; it means they can do undemocratic things,” Warshaw said.

One of the conclusions of the studies says: “As a result, Indiana Democrats are under-represented in the General Assembly and in Congress. One party is effectively shut out of the legislative process.”

“In Indiana, the General Assembly is responsible—per our state’s constitution—to draw legislative and congressional maps, and that’s a task we take very seriously. Public trust in the process is paramount, and to that end, we intend to have a very transparent process where we gather feedback from Hoosiers across the state,” Bray said in a statement to The Statehouse File.

“Drawing legislative maps that are fair is my top priority as we approach redistricting, and we hope to soon have the data needed to formally begin the process.”

The Republican party has been the supermajority for the last decade. Warshaw said that Indiana used to have fair district lines, but that changed after the 2011 redistricting period.

Jay Yeager, an Indianapolis lawyer for voters in recent gerrymandering litigation and a volunteer with Women4Change, said that the gerrymandering in Indiana did not happen by accident and that the members involved were aware of their actions.

“Think about what a gerrymander does, it really attacks the voters of one party and penalizes them for being members of that party, for having those political views, because it packs them into a few districts,” Yeager said, “so that there they waste a lot of votes and they can’t elect very many representatives, and hence we have these super majorities.”

According to Yeager and Shahid, by having a supermajority party, the Indiana code of “fair and equal” is being broken.

“The Democrats are very grossly underrepresented. They don’t have any influence, and the Republicans do whatever they want to do, and I don’t think that’s healthy,” Yeager said.

“I don’t think it’s healthy for the state in the long run for 40% to 45% of its citizens to feel they have no input in their government, that our government ignores them because the other party’s in charge. That’s kind of un-American.”

Warshaw said that one of the solutions would be having a nonpartisan commission to be in charge of creating the district lines. According to Ballotpedia, seven states, among them Arizona, California, Michigan and Washington, utilize said commissions to draw their district lines.

Warshaw says that public awareness is what’s going to get the state back into a fair and equal distribution of political power and representation.

“Because at the end of the day,” Warshaw said, “in a democracy, a crucial part of the puzzle is just citizens being engaged by holding our elected officials accountable for doing things that are either bad policies or, in this case, sort of violate democratic norms.”

Shahid encourages citizens to continue to learn about redistricting and keep their lawmakers in check.

“You have to care about redistricting because, ultimately, the folks that get to author and vote on laws are the ones that are drawing these maps. And so if we want to see change in terms of legislation, the first process is making sure that we are engaged and shed a light on the redistricting process,” Shahid said.

“We owe it to our next generation to make sure that Indiana continues to be a place that attracts and retains great people.”