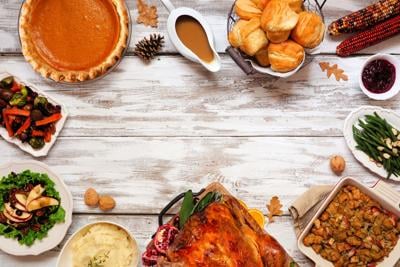 As you set out your turkey to thaw or prepare your boarding passes to fly home to family for Thanksgiving, our Indiana politicians are busy doing the exact same things.

Gov. Eric Holcomb will be gathering with his family Thursday. Last year, he was able to see family, but he did so in smaller groups.

“We are hosting family here at the residence, so we’re really looking forward to everyone pitching in and bringing a plate and not putting too much on any one person,” he said.

In regard to what he’s thankful for, he said this year, he has his longest list ever.

“Through my work lens, I’m thankful for our state employees,” he said. “They’ve really obviously stepped up to the plate every single day and taken a lot of fastballs and curveballs.”

Holcomb also said he is thankful for Hoosiers and how giving they have been this year. He said that during a Tuesday visit to Camp Atterbury, he was told that Hoosiers have given 75% of all donations for the Afghans at the seven national safe-haven bases that are part of Operation Allies Welcome.

Holcomb is also thankful for the people closest to him.

“Obviously, thankful for my family and thankful for my wife Janet’s patience and love and, really, sense of humor during the last couple years. (That) has kept it real,” he said.

Have vaccine, will travel

Sue Errington, D-Muncie, is a state representative, but she’s also a grandma excited to see her family this week. Before seeing them this past July, after receiving her vaccination against COVID-19, Errington hadn’t seen her family since Thanksgiving 2019.

Errington said she flies out to see her relatives Wednesday, and that’s one of the things she is most thankful for.

“So many families, even those who all lived in Indiana, had to celebrate Thanksgiving alone or with one or two people in their household (last year),” Errington said. “You really couldn’t have the traditional family gatherings that are so important to all of us.”

Errington also said that she’s thankful for the availability of COVID-19 vaccines, the increase in national wetlands legislation, and that women in Indiana still have the right to choose how they go about unwanted pregnancies.

Giving back on Thanksgiving

Rep. Craig Snow, R-Warsaw, is entering his second legislative session in January and is volunteering with his wife at their local homeless shelter on Thanksgiving. In the afternoon, he will join his family for a turkey dinner.

Snow said he is thankful to be living in Indiana.

“You know, we could be in a very different country or in a very different part of the world. Given everything that is going on, we have a lot to be thankful for,” Snow said. “I have to tell you how proud I am to be in Indiana. From a financial standpoint all the way down to everybody that works at the Statehouse, it’s been a very big relief that we’re in the financial place that we’re in.”

Snow is also thankful to get to be around his family.

“We’ve been so blessed, and we’re expecting a grandchild in March, and so we’re eagerly awaiting his arrival,” Snow said. “That’s been a lot of fun. I’m very grateful for my family.”

Rep. Ed DeLaney, D-Indianapolis, echoed the excitement of seeing his family as well.

“Happily, our whole family will be together at various times over this holiday weekend,” Delaney said.

DeLaney said he is also thankful for the many road trips he was able to take with his family over the last year.

As far as what Hoosiers can be thankful for, DeLaney said the progress made in Indiana toward ending COVID-19 is something to be happy about, as well as how the federal government has handled the economy.

Don’t think that politicians aren’t excited for Thanksgiving football too. Gov. Holcomb ended his list with a little Hoosier pride.

“Can I add one more (thing)?” Holcomb said. “I am thankful for the Colts’ winning season!”

Ashlyn Myers is a reporter for TheStatehouseFile.com, a news website powered by Franklin College journalism students