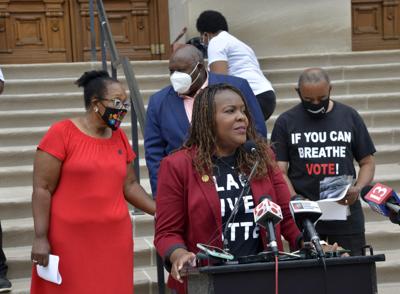 Since Rep. Robin Shackleford, D-Indianapolis, became a legislator in 2012, there’s been a consistent theme when Indiana politics collides with race.

“We’ve gotten a lot of avoidance of even the term racism,” Shackleford said, now as chair of the Indiana Black Legislative Caucus, or IBLC, in a year that’s been called a racial awakening around the country.

After several months of slowed business and closed schools prompted by the COVID-19 pandemic, police in Minneapolis killed George Floyd, a Black man, after kneeling on his neck for almost nine minutes. A bystander captured the scene on camera, prompting outrage and protests nationwide as it was shared on social media.

Shackleford said it’s this tragedy that’s thrust race to the forefront of Indiana politics. Coupled with time in quarantine and social isolation, video evidence of attacks on Black men like that shared after George Floyd’s death by police capture greater attention.

“I would say it’s been kind of a perfect storm with COVID-19 and people being at home. They got to see racism on full display,” Shackleford said. “When you have everyone at home and millions watching, that starts to ignite in them action for a movement.”

And that’s the kind of pressure, Shackleford said, that can help a majority-white state and legislature discuss openly what challenges the Black community faces.

In 2020, there are 13 members of the IBLC. That’s around 8.6%  of the 150-member legislature in a state where nearly 10% of residents identify as Black, according to data from the U.S. Census Bureau. Nearly one in five Hoosiers identifies as a person of color.

Each year, the caucus shares policy goals with the governor and legislative leaders that largely go ignored, such as a call for a comprehensive hate crimes bill that wasn’t heeded until 2019 — and even then, the final product wasn’t exactly what the caucus demanded.

While the 2020 legislative session isn’t expected to begin until January, Gov. Eric Holcomb delivered a half-hour speech Aug. 18 announcing new measures to promote equity and inclusion in the state in response to renewed conversations around racial justice. His plan includes mandatory body cameras for state police, the launch of a new dashboard to track data around equity and inclusion programs, and a promise to appoint a first-ever chief equity, inclusion and opportunity officer.

For Black leaders like Shackleford and Holcomb’s opponent for re-election, Democrat Dr. Woody Myers, the question of sincerity remains at the forefront of how they interpret Holcomb’s new equity and inclusion plan.

When IBLC members met with Holcomb earlier in the summer, Shackleford said he indicated he would be announcing a plan to respond to the unrest. But when a member requested to see a draft of the plan to offer feedback from the caucus, he declined. And the plan he did unveil did not include the caucus’ priority justice reform items, including bans on racial profiling, chokeholds and no-knock warrants.

Shackleford added she worries that, if done incorrectly, Holcomb’s proposed chief equity, inclusion and opportunities officer would end up as a symbolic post rather than a way to enact meaningful change.

Myers criticized Holcomb’s approach to equity and inclusion with a simple statement after he announced it to the public: “Much too little, much too late.” Myers later explained his statement referred not only to Holcomb’s choice to unveil a plan months after protests around racial justice began with renewed force, but also to problems that should have been addressed under former Republican Govs. Mike Pence and Mitch Daniels.

Myers pointed to issues like maternal and infant mortality among Black mothers, for one, that have made little progress even with efforts by the Holcomb administration to improve Indiana’s infant and maternal mortality ranking.

“His job is not to convince me,” Myers said. “His job is to do the right thing for the people of this state. And thus far, in my view, he hasn’t.”

The rhetoric in Holcomb’s speech is also at odds with prominent leaders in his party, who gave addresses of their own at the Republican National Convention last week. Vice President and former Indiana Gov. Mike Pence did not reference the deaths of Black men and women in his acceptance speech, focusing instead on violence, rioting, and using his platform to push for “law and order.” He also outlined accomplishments he attributed to the Trump administration, including the lowest unemployment rate for African Americans ever recorded.

Darryl Heller, director of the Civil Rights Heritage Center through Indiana University in South Bend, said Holcomb needs to denounce both Pence and President Donald Trump for using language that ignores the full conversation around racial justice if he wants Hoosiers to believe him.

“He’s dog whistling to his white base, and I think Gov. Holcomb needs to call him on that,” Heller said of Pence’s speech. “If Gov. Holcomb wants to be sincere and honest with himself, and with the rest of us Hoosiers, then he needs to take leadership in his party.”

“Like Governor Holcomb, multiple speakers at the RNC addressed the deep issues Black people face today and the work that is being taken — while at the same time respecting law enforcement and the rule of law,” Lawson said in a statement.

Lawson pointed to the address where Holcomb unveiled his equity and inclusion plan, during which he urged protesters to remain peaceful: “If you want change, don’t throw a brick,” he said. “Use a brick to lay a foundation for something better.” She compared this statement to those made by Pence and Trump at the RNC.

“The American people know we don’t have to choose between supporting law enforcement and standing with African American neighbors to improve the quality of life in our cities and towns,” Pence said in his acceptance speech. “From the first days of this administration, we have done both.”

President Trump has taken to social media in recent days to criticize racial justice protests. Trump’s official account retweeted a claim from One America News Network that demonstrations around the country are part of an organized uprising against his administration.

Holcomb remains an honorary chair for the Trump re-election campaign and praised Pence’s acceptance speech last Wednesday, voicing his support in a message posted to his campaign’s Twitter account.

Democratic presidential nominee and former Vice President Joe Biden also voiced his support for law enforcement in recent remarks. He does not support defunding the police, as the Trump campaign has claimed several times since protests began.

Like Shackleford, Heller said the COVID-19 pandemic helped bring attention to racial disparities along with recent Black deaths involving police.  The Black community in particular continues to be disproportionately affected by the pandemic, according to health experts.

But Heller said there’s a third factor that brings race to the forefront of politics as well: Four years of President Donald Trump, who has wielded race since campaigning for the presidency as a tool to divide those who don’t support him from those who do.

“Gov. Holcomb will say the words, ‘Black lives matter,’ and that ‘Black livelihoods matter.’ I applaud him for making that statement publicly,” Heller said. “We can’t get those kinds of statements out of our national leaders, though, and the leaders of his party.”

A Brief Interview with Jean and Billie Breaux

One Night in April