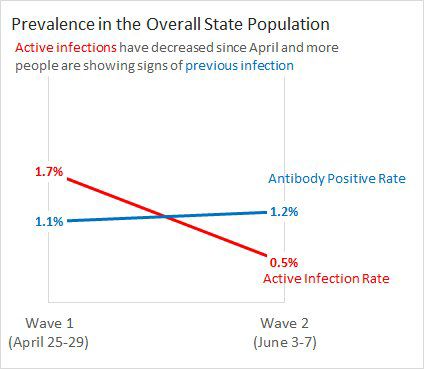 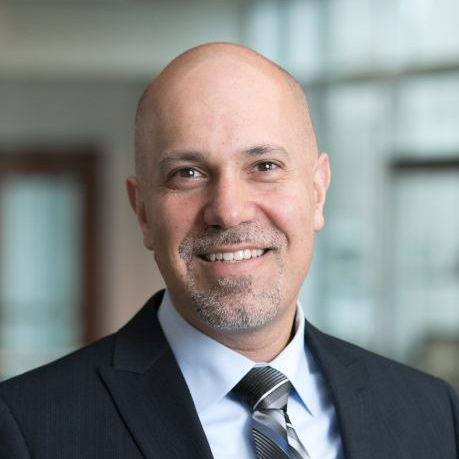 Nir Menachemi, Chair of the Department of Health Policy and Management at the Indiana University Fairbanks School of Public Health 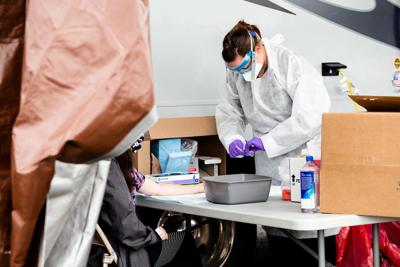 June 23, I interviewed Dr. Nir Menachemi, chair of the Department of Health Policy and Management at the IU Richard M. Fairbanks School of Public Health, for the second time. Menachemi is the leader of the random sample study of COVID-19 prevalence in Indiana. He has overseen two phases of testing so far, one in late April and the second in early June.

From June 3 - 8, his group of researchers tested 3,600 Hoosiers for active viral infections and for antibodies of SARS-CoV-2, the novel coronavirus that causes COVID-19. Approximately 2,700 people were randomly selected for this testing. Another 1,000 participants were found through reaching out to at-risk populations in Allen, LaGrange, and Marion Counties.

The major takeaway from the studies so far is this: The results show a greater number of Hoosiers testing positive for SARS-CoV-2 antibodies —  evidence of previous infection —  and fewer testing positive for active infections. Taken together, this indicates that virus spread has slowed in Indiana, for the time being.

In comparing the results of phase two to phase one testing, IUPUI researchers ascertained that the active infection rate among Hoosiers was 0.6 percent, a decrease from 1.7 percent in phase one.

“The estimate for antibody positivity in phase two was 1.5 percent —  an increase from 1.1 percent in the phase one results,” according to a June 17 press release from IUPUI.

As for communities of color, the rate of infection has also decreased, but is still higher when compared to whites. The rate of antibody positivity has also increased, mirroring the increase in the white population. The active infection rate, however, was found to be 1.4 percent, much higher than the rate for whites.

Before our interview, I asked my Facebook friends for questions that I could ask Dr. Menachemi. I received two similar questions by two Facebook friends who had experienced COVID like symptoms in January. One of them had been diagnosed with Influenza B, but wondered if he had experienced COVID at the same time. Both wanted to ask Dr. Menachemi if they should be tested for antibodies, in order to find out whether they had previously been infected with the virus.

“My knee jerk reaction is no,” said Menachemi. “Whether their test comes back as positive or negative, it shouldn't affect anything that they do. Because if it comes back positive and they did have COVID at some point, whether it was that bout or some other bout, they don't know if it's protective and to what extent or for how long. To relax anything you would do to be prudent — would not be wise. If it came back negative, we would still practice all of the same social distancing, hygiene, masking and etc. If your behavior isn't going to be changed, why do the tests that shouldn't affect your behavior or decision making?”

It should be noted that this question is separate from whether or not you should be tested if you are experiencing symptoms, live in close contact with someone with COVID-19, or if there is ongoing virus spread in your community. In these situations, according to the CDC, you should call your healthcare provider, explain your exposure and your symptoms, and let them counsel your next steps.

Dr. Menachemi’s answer reflects current uncertainty about the novel coronavirus. So did the current research he cited in our interview.

“A study was published recently in Nature Medicine that found that asymptomatic infections, within eight weeks, a significant portion of them —  I think it was almost half —  have antibodies, IgGs, at undetectable levels,” he said. “This also is a result seen in people who are mildly infected.”

Another complication is that IgGs (Immunoglobulin G) eventually turn into IgMs (a class of immunoglobulins of high molecular weight).

“We're not testing for IgMs,” continued Menachemi. “And so not seeing IGGs doesn't mean someone isn't immune. On top of that, just because you don't see any of those antibodies, doesn't mean you were previously infected and your body didn't store a copy of the antibody in case it isn't.”

What is herd immunity? Menachemi describes an example of someone walking into a crowded room where herd immunity is present to describe the phenomenon. “If you are unvaccinated for some disease and you're in a room with a bunch of people who are not susceptible to it, you cannot get it from anyone,” he said. “So you are also, thereby protected. That's what herd immunity means; It's the small percentage of people that are vulnerable to infection that are protected.”

The efficacy of testing

Another Facebook friend asked about the accuracy of the COVID-19 tests being used. But, according to Menachemi, the real question is not so much the efficacy of the test itself, but at what point, after being infected, that you take the test.

Then Dr. Menachemi posed a rhetorical question: Does this mean, if you test negative at six days and then develop symptoms at day 14, that the test fails?

“At 14 days, it picks up everyone who has these antibodies,” he said. “Where the accuracy of the test falters is when you are early in the infection bout [...]”

In phase two testing in early June, the IUPUI researchers had to deal with a complicating factor: “If you were randomly selected for our study in wave one, you were much more likely to participate because nothing was known; No one knew anything about how far this has gone,” he said. “If you wanted to get tested you were unable to because of just bottlenecks everywhere and insufficient testing.”

During the time that phase two testing was taking place, however, tests were much easier to obtain.

“The question becomes,” Menachemi continued, “Who was most likely not to participate, that might have participated in wave one had they been invited in wave two. It was probably people who've already been tested and tested positive.”

But if you already knew you had been sick, you were probably less likely to participate in phase two testing, he said.

“We're right now, literally, trying to figure out how much of an effect that might have had on this edition,” he said. “We know who was randomly selected and we know who in the state was tested. We're trying to figure out how many of them have already screened positive, excluding them from wanting to participate. Until I  have that answer I can't do the math to tell you what amongst the random sample, the true previous infection rate is.”

Despite such questions, Menachemi is confident that the data from the random sample study will be helpful for the state and federal agencies that are creating policy to deal with COVID-19.

“I think when you have multiple, disparate sources of data, all pointing in the same direction it builds up your confidence that a decision might be sound,”  he said. “I think this has played a role in contributing to another important independent data point to the things that have been considered. We know deaths, we know hospitalizations. We now know infections. We now know ratios of current to previous infections.”

One data point that I wondered about was whether the Indiana result finding 45 percent asymptomatic positives in phase (or wave) one, and 43 percent in phase two, was duplicated in testing elsewhere in the country.  But Indiana is the only state testing on a statewide level — the first and so far only state to do so —  and it may be difficult, I thought, comparing these results to those of any other study.

So I asked Menachemi whether when comparing Indiana’s results to other studies —  done on city, county, or on clinical levels —  was like comparing apples to pineapples. (This happens to be one of his favorite expressions.)

“I think CDC and other researchers have estimated the asymptomatic rates to be somewhere between 20 and 45 or 50 percent,” Menachemi said. “Lots of studies that have tried to ascertain this. Many of them have come from the clinical setting. So it's not exactly the same. But, nevertheless, there are some clinical studies that find high asymptomatic rates, like for example, If you tested every pregnant woman coming in to deliver. I think they found something like a 40 percent asymptomatic rate among infections.”

No Going Back to Business as Usual

I also asked the doctor about whether the state’s “Back on Track” reopening might eventually be slowed or halted by the high number of asymptomatic cases. How do you, for example, check the spread of the virus in crowded schools among children if nobody knows who's sick?

I've been fascinated by —  and this is not political —  but really just the two polar opposite ways of thinking about it, and I'm not sure I agree personally with either one,” he said in response.

The first approach, Menachemi told me, is ”Don't let anyone eat, breathe, touch talk; Don't do anything, literally freeze everything”.

The other approach is to go back to the pre-pandemic idea of normal.

“I think both of those options are equally implausible and unrealistic, given what I know,” Menachemi said. “The happy medium is somewhere in between. and it probably involves accommodations. So, opening five days a week is not necessarily bad unless it's going back to business as usual as in 2019.”

Menachemi said that he has, overall, been impressed with Indiana’s statewide handling of COVID-19 —  in comparison to other states, particularly and the South and the West, where the novel coronavirus is surging.

“I've lived in many states, Menachemi said. “I find Hoosiers to be reasonable people. I have a colleague that literally just drove down to Florida for a week with his family to go do something. And he said, ‘As you got to the states south and south, you saw less and less and less until you saw no masks on anyone, anywhere. I think Hoosiers are just willing to be reasonable, willing to accommodate, willing to understand what the risks are, and willing to do things to minimize those risks. I think that goes a long way.”

The doctor recommended that my daughter get tested. So we looked up the nearest testing facility that tests minors, and that was Immediate Care at Nora, on the far northside of Indianapolis.