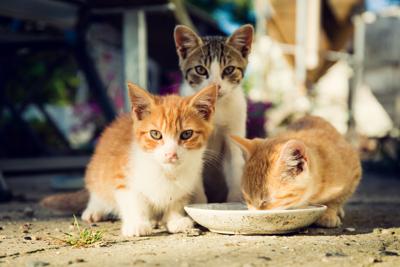 Sully, a young black cat, was brought to Indianapolis Animal Care Services because her owner could no longer care for her. The owner told Taylor Robey, the community cat coordinator there, that Sully enjoyed being outside.

Sully was rehomed as a barn cat and now lives a happy life chasing many mice. Photo provided.

Sully was then adopted by a new owner and placed in the Working Cats Program, where she helps her owner by catching mice.

“Sully is doing remarkably well in her new home, and I have been told she is an excellent mouser,” Robey said.

The Working, or Barn, Cats Program was created about four years ago by the IACS. The idea is simple: People can adopt cats that may be feral or less socialized to help catch mice on their property. In return, they provide the cat with food, shelter, and veterinary needs.

Katie Trennepohl, deputy director of Indianapolis Animal Care Services, said the organization typically takes in about 6,000 cats a year, with roughly 600 of those becoming working cats.

Another way the IACS helps feral cats is through its trap-neuter-return program, through which they spay/neuter feral cats and then return them to where they were found, Trennepohl said.

“For a lot of the cats, the shelter environment can be really stressful for them. So when you take the cats that may not be the most socialized and put them in a cage, it’s not realistic to find a home for that cat or an adoption option for that cat,” Trennepohl said.

One of the biggest problems is that the cat population is continuing to grow, causing overpopulation of feral cats. Nationwide there are at least 40 million feral or stray cats, and only about 2% of them are fixed, according to the Humane Society of the United States. Cats can have two to three litters a year with each litter averaging four to eight kittens, which can cause shelters to overfill, leaving many cats to fend for themselves.

In Indiana, one organization called FACE Low-Cost Animal Clinic works with the IACS trap-neuter-return program by helping to neuter animals. Its website reports that this year it has performed over 1,500 spay and neuter surgeries.

“Getting them back out where they already were and where they work is really the best option to keep them safe and make the shelter a better place for the next cat that comes in,” Trennepohl said.

Indiana lawmakers tried to pass bills that would help stray dogs and cats during the 2021 legislative session. House Bill 1142 would have required pet stores to only sell animals that have been rescued from animal shelters. However, the bill was sent to the House Commerce, Small Business and Economic Development Committee in January and never passed out of the committee. HB 1268, which would have required animal care services that pick up lost pets to return them to their owners, died in the House Agriculture Committee.

In 2016, Indiana passed a law requiring all animal care facilities to spay and neuter all dogs and cats before adoption. The law goes into effect July 1, 2021.

Baby Beluga and Claude are two cats that have been rehomed thanks to the Working Cats Program. Baby Beluga was originally adopted but was very shy and uncomfortable in his new home, so he was placed with a new family that has a heated garage and is now more social and comfortable.

Claude was not able to be returned to her original neighborhood after being spayed because the person who turned her in did not leave her contact information, so the same person that adopted Baby Beluga also adopted Claude a short time later. Robey said that Baby Beluga and Claude are now best friends, and Claude has started to open up around more people thanks to Baby Beluga.

“So, these cats, even though they’re not necessarily socialized or they have needs other than what an indoor-only cat does, it doesn’t mean they don’t matter still. These cats are still living creatures, and they still are underrepresented,” Robey said.

Taylor Dixon is a reporter for TheStatehouseFile.com, a news website powered by Franklin College journalism students.