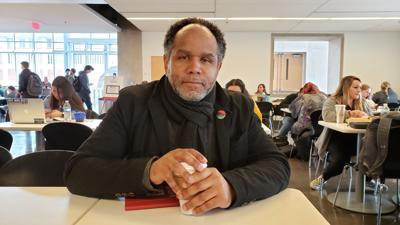 How do you combat implicit racial bias in the classroom? Lasana Kazembe, assistant professor of Urban Teacher Education and Africana Studies at IUPUI, has some thoughts on the subject.

You can hear Kazembe speak on this subject and more at the Kurt Vonnegut Museum and Library during the launch party for their Year of Civic Engagement on Tuesday, Jan. 28.

WHAT //  Launch Party: The Year of Civic Engagement

Kazembe is developing, with funding from the IUPUI Arts & Humanities Institute, a curriculum that incorporates the histories of six 20th-century global Black Arts movements. He currently is testing that curriculum in the Louis B. Russell School 48, an elementary school in the Mapleton-Fall Creek neighborhood of Indianapolis.

“A set of political circumstances brought about an artistic response to social and political conditions in various locations around the globe," Kazembe says, describing these movements. "Young black poets, singers, dancers, musicians, visual artists, and performing artists actually developed art that responded to the political conditions that they were experiencing. My work attempts to capture and convey that art history to create what I call a usable past. We don't just want to stay stuck in history. We want to use that and then allow students to make connections between what was going on in Haiti in 1932.”

In addition to this historical grounding, map literacy is a component of the program.

His program encourages students to explore their artistic sides.

“The curriculum also challenges their creativity so that they can actually create visual art, painting, poetry, and prose,” says Kazembe, who will be rolling out the program in the summer of 2020 and 2021.

Kazembe is a widely published poet and writer who has read his work at universities and taught the craft in classrooms and detention centers.

He recently taught poetry to the inmates of Stateville Correctional Center in Crest Hill, Illinois. This yearlong workshop was sponsored by the Prison Neighborhood Arts Project.

“They learned about the mechanics of poetry, so there was a lot of learning about writing style, line breaks, enjambment, verses, end stop lines, all of the technical stuff related to writing poetry, with it,” he says. “It was also the concepts, ideas about different poetry traditions.”

Kazembe edited a book of poetry by these inmates that resulted from these workshops titled Write To Be, and published by Third World Press.

His latest book, which he edited, is Keeping Peace: Reflections on Life, Legacy, Commitment and Struggle, which came out in 2018.

“It's a conversation between Dr. Haki Madhubuti, founder of Third World Press Foundation and one of the architects of the Black Arts Movement, Father Michael Pfleger, an activist Catholic priest in Chicago … and Cornel West,” says Kazembe about the book. ”The three of them share a 40-plus-year friendship. The conversation came about as a result of about an eight-hour conversation that we had.”

And sometime within the next year, he will debut what he calls a blues poetry opera: The Voodoo of Hell’s Half-Acre: The Travelin’ Genius of Richard Wright from Natchez to Chicago.

In the meantime, Kazembe will continue training pre-service teachers at IUPUI.

Ninety-three percent of Indiana teachers are white according to Chalkbeat.org, citing the most recent data available, for the year 2015-2016, in a school environment that is becoming increasingly multicultural.

Kazembe believes that it can be a problem if, say, a young white teacher who grew up in an all-white community is suddenly put in front of a multicultural classroom without having had the proper training.

“What I try to do is help these people, these pre-service teachers, understand that teaching is not simply a technocratic exercise,” Kazembe says. “In order to become an effective classroom teacher, you have to be a student. And that means you have to examine assumptions, you have to examine your biases. You have to examine all of the things that you bring to education because we know, just by dint of the research, that there was a strong correlation between teacher beliefs, teacher expectations, and student academic outcomes. A lot of times teachers say things that indicate they don't really believe that all students can learn.”

As mentioned in The New York Times on April 15, the IUPUI Arts & Humanities Instutute's project will include a searchable database that future researchers will use to explore the personal stories of the COVID-19 pandemic.