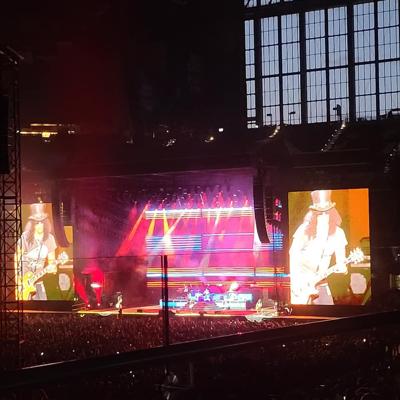 The first time I saw Guns n’ Roses was at the Hoosier Dome. Metallica Freaking destroyed the joint, and even after playing an extended set, there was a 2-hour wait for Axl and Co. to take the stage. When they did, the set was lifeless and despondent with Axl bitching most of the time about how much he hated Indiana. The next year I saw them at Deer Creek and actually playing in the middle of a cornfield made Axl even saltier and once again the band put on a mediocre show. After watching Axl come back over a decade later with his Chinese Democracy Vegas Act that featured a guitarist with a KFC bucket on his head, I abandoned all hope of ever seeing a great G n’ R show. My only consolation was that at least I got to see Velvet Revolver with Duff, Slash, and Scott Weiland destroy New Orleans back in the early aughts.

On September 8, 2021, after a year+ delay, Indiana finally got an honest, kick-ass motherfucking great Guns n’ Roses show. It was glorious. It wasn’t a fucked-up, drunken piss match, and it wasn’t a sparkly Branson extravaganza. It was a good ol’ fashioned rock and roll show put on by hall of famers who were firing on all cylinders. It took a few songs to get the sound dialed in, and the sound guy fought the massive room all night, but things still turned out just groovy, man.

The addition of Duff and Slash made such a difference in the show. Shit. Even “Chinese Democracy” sounded great. It was also a treat to hear Axl Rip on the Velvet Revolver song “Slither.” Slash proved himself as a legendary guitarist. His skill made songs like “Double Talkin’ Jive” and “You’re Crazy” awesome, and his mixing in Hendrix’s “Machine Gun” into the band's incredible reading of “Civil War” was genius. Duff’s cool wickedness was the glue that kept things in line and his vocal turn on “I Wanna Be Your Dog” was so much fun.

But. Axl. What a motherfucker. He was in fine fettle. He was fit. He sounded great. He actually seemed to be having a great time rocking the house. On the classic after classic, he delivered his iconic voice and frontman talent. From “Estranged” to “Night Train,” “Don’t Cry” to “Rocket Queen” He finally shared his gift with his home state. The big three, “Welcome to the Jungle,” “Sweet Child O’ Mine” and “Paradise City” were given definitive performances and even head-scratching covers like The Who’s “The Seeker” and Glen Campbell’s “Wichita Lineman” (?) were fun and sounded great.

But when he sat down at the Grand Piano and eased into “November Rain” he was pulling out all the stops and by the end when Slash was melting every face in the place, I knew we were witnessing something special. The sweet baby Jesus, infused with the black blood of rock and roll had come down and given Indiana a great Gn’R show. Hallelujah.

Wolfgang Van Halen’s (Eddie’s boy) Mammoth WVH opened the show and he and his whipper-snapping band really came out to show us the future of rock. Wolfie’s songs like “Stone,” “You’ll Be the One” and “Epiphany” were so good, captured the crowd, and made his old man proud. Expect to see wolfie headlining big gigs soon.

I knew we were witnessing something special. The sweet baby Jesus, infused with the black blood of rock and roll had come down and given Indiana a great Gn’R show.