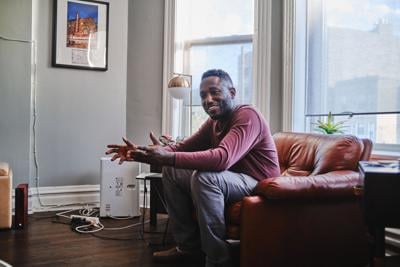 Prior to the pandemic, comedian Hannibal Buress had a lot planned for the year 2020.

“This was one of the first years in my career that I had actually planned out the entire year loosely,” Buress says. “Before, if I had a shoot that was a couple months ahead, that’d be my plan, or a tour, but I didn’t really think through my entire year.”

Ahead of his performance at Tibbs Drive-In Theatre in Indianapolis on Sept. 25, Buress caught up with our Seth Johnson for a phone interview, discussing all that led up to his upcoming drive-in theater tour. Read their full conversation below.

SETH JOHNSON: Before the pandemic happened, what was your year supposed to look like, and how did the pandemic change what you initially had planned?

HANNIBAL BURESS: At the end of 2019, I did Isola Fest — that was my first festival. I actually did that on short notice. I wanted to build the name so that I could do it properly in May. So I did it in December knowing I would take a loss on it, but [I was] just getting it on the books and getting it out there. And then, in May, we would’ve done it with a lot more promotion, sponsors and really built it up.

Obviously, that got wiped, but I had a full slate loosely planned where I wanted to do a major event each month. So in January, I was going to do the AVN Awards. I didn’t end up doing that, but then February was All-Star Weekend, which ended up happening. I played in the celeb game and did some events in Chicago. March was going to be SXSW, and we were going to premiere Miami Nights there. In April, I wanted to do a 420 event. May was going to be Isola Fest. I forget what I had for June. But then, in July, I wanted to go to the Olympics and do shows in Tokyo.

So I had this loose plot for the year that obviously got wiped, but everybody’s year got wiped. It’s just funny how the first time I ever plotted a whole year in my career it got completely wiped.

JOHNSON: Was quarantine a productive time for you? From a comedic standpoint, were there things you did find yourself accomplishing during the downtime?

BURESS: I think from a production standpoint, I progressed, just coming up with ideas and processes on how to get shit done efficiently. I think a lot of people in businesses figured out ways to streamline and still be effective.

So being able to put together a web show without anybody being in the same room together, which is stuff that was on the table and that people were already doing. But now, it forced you to really learn how to do it. Or even editing online with somebody through a video call. Being able to have a video up and talk about it right there, and talk about particular points in the video. So it made that process smoother.

I started dabbling with editing a little bit more, just doing small cuts of videos in iMovie and whatever. I got the Adobe Creative Cloud. So I’m just trying to expand the toolbox and learn the other aspects of it. It’s stuff that was all available before, but things were moving a bit faster. So now, I just want to spend more time on that. I want to learn After Effects and all these other things to just be able to produce a lot better. And then, when I am talking to my creative team about stuff, if I have a basic knowledge of the software they’re using, then it helps me communicate ideas way clearer.

JOHNSON: When did the idea for this drive-in tour come about, and how did you go about plotting it?

BURESS: I saw that Bert Kreischer was doing some shows with this company Hotbox. I’m not sure if my agent reached out or if they reached out. But yeah man. I’m just excited to try something and do some shows. They’ve been handling things really safely and responsibly. So that was affirming to know.

It’s dope to have this time to think about a show and work on it in a way that I haven’t really worked on a show before. Because I’m not going to the comedy clubs in preparation for this. I’ll have some meetings, rehearsals and writing sessions to develop this show.

This show will be based more on flow and timing than it will be on actual laughs. I’ll try to have it be a really tight production. The laughs will be there, but the thing I’m trying to capture is complete flow.

JOHNSON: I know music is such a big part of your shows, and also means a lot to you. How will music be part of this production? Will it play any different of a role than normal?

BURESS: It will, very much so. Actually, you’re about to get a scoop man. Open Mike Eagle is going to be opening on this tour. He’s an old friend of mine. I’ve known him for 18 years. He’s a great musician. We’ve collaborated on songs, videos and podcasts before. He’ll be on the entire tour, so we might come up with some stuff.

Music is going to be a big part of this one. I’m a comedian, and I’ve done music. But for this tour especially, with it being cars, you’ve gotta really play to the music element, even more so than in my theater tours.

JOHNSON: I know you’ve dabbled in music and recently put out a new song in April. Will your own music be a part of this show at all?

BURESS: Yeah, man. I might have a couple tunes in there. I’m not going to make any guarantees because sometimes I have ideas and I don’t follow through on ‘em. But I’ll say this. It would make sense for me to maybe put out some new music or something the day the tour starts. That would make sense. I’m not saying that I’m going to drop music because that puts out an expectation. But from a promotional and business standpoint, it would make sense if I did that. So maybe I will, maybe I won’t.

JOHNSON: I know you’re a music lover. As am I. That said, what have you been listening to lately?

BURESS: I’ve been listening to a lot of footwork music actually. Chicago footwork. You know what? I’ll send you my “On Repeat” [playlist]. The Spotify algorithm has been tracking me. But DJ Earl, DJ Rashad, Machinedrum. There’s this track by Jazz Spastiks that popped up on my Discover Weekly with Ladybug from Digable Planets, and her voice sounds really great when she starts off the verse.

Yeah. I’m looking through my “On Repeat,” and it’s pretty accurate. So I’ll just send it on. (See below)