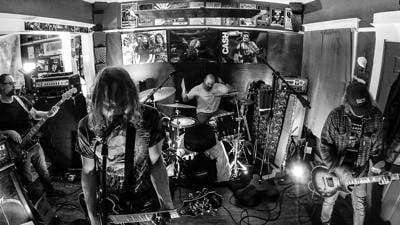 Having played more than 850 shows across the U.S., the Indy-based band practices religiously three days a week at their Fountain Square lair, working through each song in their catalog until it’s road-ready. With this being said, the COVID-19 shutdown created some rather abnormal circumstances for this unstoppable rock ‘n’ roll unit.

“When we’re not on the road, we have this Tuesday, Wednesday  and Thursday [practice] schedule. We really don’t miss them,” says lead guitarist Ken Rose. “That [the shutdown] was the longest time we didn’t practice and that we didn’t see each other.”

When the band was able to safely start practicing again, Hero Jr. shifted its focus to writing new material, since going on the road wasn’t really an option. This led to the release of their latest full-length album, Everyone, on Feb. 8. A collection of 10 red-hot rock ‘n’ roll tracks, the album was recorded entirely at the band’s Fountain Square practice space and showcases Hero Jr. in their truest studio form. (Download the track "No Control" from Everyone for free via this exclusive link.)

Since the release of Hero Jr.’s last album in 2017, the band has gone through one major change, with that being the addition of drummer Ryan Keyes. Originally from Minneapolis, Keyes serves as a permanent answer on drums for Hero Jr., who most recently had local standy Devon Ashley working as their temporary fill-in.

“When Ryan joined the band, we felt like we had our permanent situation, and it was like, ‘Okay. This is home now.’” says vocalist/guitarist Evan Haughey. “It’s been awesome just not having to wonder or worry. All of us are lifers. We’re all in it for the same reason. You can hear that in the songs.”

With Everyone, Haughey and Rose continued with their “old school” approach to writing songs, which begins with them hashing out ideas on acoustic guitars before eventually bringing skeletons of songs to the rest of the band.

“We start here in the living room with acoustic guitars,” Rose says. “We spend between five and seven days, and we go through the stuff that we’ve brought in. And then, we bring it to the band. When we’re with our acoustic guitars, we have ideas of who’s going to do what, but we’re a band. So we bring in the songs that are finished with melodies, lyrics and chords, and we really hammer ‘em out.”

Rather than recording the album in a studio, Hero Jr. decided to simply record live takes from their living room practice space, hand-picking the best renditions of each song to use on Everyone.

“We were just going for live takes that felt really good — we don’t overdub on the records,” Rose says. “We’re trying to have it so when you turn it up loud in your living room it’s like we’re in the living room with you.”

In taking this approach to recording the album, each Hero Jr. song wound up taking its absolute best form.

“When we make a record and then we go out and tour it, we always have happy accidents that happen on stage, where there’s some tweak we love that just makes the song pop in a totally different way,” says bassist Dave DuBrava. “With this one, we had a real chance to flush that out, the same way we would on tour. But we also had all those happy accidents on the record.”

Since they’ve been unable to play the new record out in front of audiences, Hero Jr. has opted to release live videos from their living room practice space each week, which can be found on the band’s YouTube page.

“Now with the record done, we’re doing our best, while we can’t play shows, to create content to help promote the record and be present with all of our social media,” DuBrava says.

Once touring picks up again, however, Hero Jr. is absolutely ready to get back at it. “I’m looking forward to getting on the road and staying on the road. That’s it,” says drummer Ryan Keyes. In the meantime, the band is making sure their artillery of songs is loaded up and ready to go.

“We’re really trying to keep our favorite 30 songs fresh enough that if someone says, ‘Hey. Could you play that,’ then it’s not like, ‘Well, we haven’t heard that for years,’” Rose says. “It’d be really fun on the next tours to just switch up the set depending on how we feel each night.”

Ultimately, the band plans to continue forward with the momentum they’ve built for themselves, after years of lighting up rooms from coast to coast.

“A lot of things were coming to their natural flow when COVID happened,” Rose says. “We were starting to talk to agents, and we kind of started making a little bit more of a club band name for ourselves. We were playing theaters and bigger venues. We’re trying to stay at that level.”