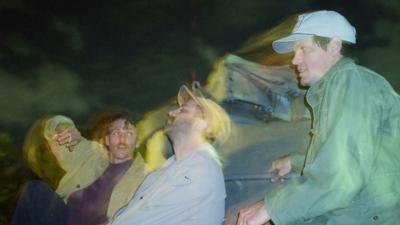 Since forming a decade ago, Houndmouth has built up quite an impressive resume.

Over the years, the Hoosier-bred rock band has toured the world, performed festivals far and wide, and appeared on nationally televised shows like CBS This Morning and Letterman. That’s not to mention the fact that their mammoth hit song, “Sedona,” now has more than 166 million plays and counting on Spotify, with no signs of slowing down.

Nevertheless, the humble Heartland three-piece still calls Indiana home, writing and recording out of a mystical nook in New Albany known as the Green House. Fresh off the heels of their latest album, Good for You, Houndmouth vocalist/guitarist Matt Myers caught up with our Seth Johnson for a phone interview, discussing the band’s Indiana roots and much more. Read their conversation below.

SETH JOHNSON: What was it like growing up in New Albany?

MATT MYERS: There was not a scene. Nobody was into anything cool…. or they were but you had to search for those people and kind of just feel it out. If you wanted to dive deep, you really had to do some work and search, or it would just kind of find you. So basically, you were just left to your own devices and came up doing alternative things for fun, instead of the given things that are created for you in a big city.

JOHNSON: In what ways does your latest album, Good for You, tie back to those roots in New Albany?

MYERS: I wrote a lot about growing up. There’s a song called “Ohio” on the album that’s pretty much about glimpses of my childhood in Indiana. It’s kind of interchangeable. If you’re from Indiana, you can just tack that into Ohio because it’s the same landscape. It’s really the same people — the Midwest is just so alike in that way.

JOHNSON: What were those early days of touring like for Houndmouth?

MYERS: When we first started, we didn’t want to be a local band. We were like, “If we’re going to be a local band, we’ll just not play.” So we formed the band, and then we got a show over in Louisville. We didn’t even have a name. We were like, “Oh shit. We need a name.” So we threw a name on the project and played, and then we just kind of stopped playing locally. Our buddy was sitting on the couch, and he was like, “I’ll manage you. Just don’t put music on the internet anymore.” Because we were just throwing songs up for free.

In the early days, we went down to SXSW. We were actually told, “It’s not really worth it to go down there, but you can go if you want.” So we were like, “Okay. I guess we’ll rent a vehicle and take our stuff down.” We did that and ended up meeting our booking agent and Geoff Travis from Rough Trade, who signed us. We just liked making music and writing songs. We never really desired anything more than that. It was just kind of us going with the flow.

JOHNSON: Over time, it does seem like you’ve developed a relationship with Indianapolis with the amount of shows you’ve played here in recent years. Do you remember when you first started coming to Indy?

MYERS: Weirdly, we opened for the Lumineers when we first started. It was 2011 or 2012, so when that first Lumineers record came out. We were in our early ‘20s and were like, “Oh man. This stuff sounds pretty good.” And then, they blew up. But they already had this show at Radio Radio scheduled while they were blowing up, so we opened for them there. That was freaking bonkers. We were kind of local to Indiana too, so it was just a great show.

JOHNSON: What has this past year or so been like for the band? When did work on the album start, and what impact did the pandemic have on it?

MYERS: The writing started in 2019. I hadn’t written for a long time, and I was kind of getting back into a process. So I would just come down to the Green House and take walks. I’d go out to a diner, come back, sit around and write something — just starting the process. I ended up writing seven songs over a four-month period.

Our producer, Brad Cook, heard some demos, and he called us. We were like, “Can you come to New Albany and just hang out?” So he flew in. We picked him up at the airport, brought him to the Green House and were like, “Can we make a record here?” He was like, “Sure. We can make this happen.” So we got our team together, set up the Green House as a studio and started recording the songs.

We got seven songs recorded, and then the pandemic happened. So that was more sitting around, writing and walking. [laughs] We had to record three more songs because we needed a 10-song album. Then, it was just Shane and I left to our own devices. We made those three songs the way we knew how. It was a little more reckless than we had before because when we had Brad it was wonderful. It was really intentional and stripped down, and I just loved recording that way. So we tacked on these three other songs, which was kind of odd but I enjoyed how the whole thing came out.

JOHNSON: You mentioned the Green House in your previous response, which I’ve also read some about in the press materials your PR team sent me. Can you talk to me more about the Green House’s significance to Houndmouth and what role it’s played to the band over the years?

MYERS: I knew Shane in high school, and I heard he had a project when I was like 23. I messaged him on Facebook and was like, “Can I come over? We can play and hang out a little bit.” I walked in, and it was this freaking immaculate, old, federal-style house built in the 1800s.

I was expecting a dingy college apartment or something. So I pretty much walked in and was like, “I’m not leaving.” We started playing and hit it off. And then, we called our other homies to come over and play.

JOHNSON: And the house has stuck around ever since?

MYERS: Yeah. It’s in the family. After we came in, started playing here, and got a little bit of success, his parents were pretty adamant about holding onto it. So I guess it’s not going anywhere. Well, I hope not. It’s not mine to say. [laughs]

JOHNSON: You’ve mentioned working with producer Brad Cook (Waxahatchee, Hiss Golden Messenger) on Good for You. What was working with him like, and what did he bring to the process?

MYERS: It was an interpersonal thing. Brad’s kind of a genius because he doesn’t have a producer stamp or a sound that he’s after. Everything kind of just happens, and every frequency and tone that should go on the song serves the melody and is very intentional.

When we record stuff on our own, we work kind of recklessly, which is fun sometimes. But you get burnt out doing that. You get burnt out on reverb, distortion, and [having it be] loud all the time. So it was nice to have a change of pace. There was literally no reverb on the vocal takes. Everything was just zoomed in and dry.

JOHNSON: Do you have any other specific memories from making this album, especially with the strange circumstances that surrounded it?

MYERS: I just remember feeling really safe, looked after, and taken care of because it was kind of a vulnerable situation. And, we hadn’t tested any of the songs live. So we really had to trust our instincts with the songwriting.

I just remember being in a really fluid, homey state. I remember getting on drums, playing really soft and light over a take, and that ended up being the drum take on “Good for You.” We were just in our home space, and it was all very fluid.

JOHNSON: Does the album’s title hold any significance?

MYERS: It’s not exactly self-explanatory, and it’s not exactly ambiguous. To me, Good for You kind of has sarcastic connotations attached to it. The song itself has to do with detaching from desire and external things and being cool with yourself. And when you’re good with yourself, you can kind of just say, “Alright, good for you,” and let things roll off.

JOHNSON: This album is coming out via Dualtone Records. Can you tell me more about your relationship with them?

MYERS: We were actually talking with them for our very first label. They had the Lumineers, who we opened for at Radio Radio, but we ended up signing with Rough Trade. Then, when we were making this record, we got dropped from Warner, so we didn’t have a label while we were in the process of making a record. So we rekindled our talk from 2012.

JOHNSON: You have a slew of tour dates coming up in November, including back-to-back headlining nights at the Vogue. What are you looking forward to when it comes to getting back out in front of fans?

MYERS: Well, I just got over the flu, so I’m grateful I didn’t get that on tour. [laughs] Right now, I’m happy to not have cold chills and be curled up in a bed, so I’m psyched to be out on the road.