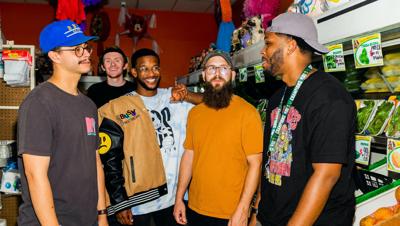 With each and every one of their shows, the Indianapolis band Huckleberry Funk has three primary objectives.

“We bring the party, we talk about love and then we talk about the real shit,” says lead vocalist Dexter Clardy. “I just feel like those are the three main things that music can impact really heavily.”

On Saturday, Sept. 11, Huckleberry Funk will perform at the annual Hop Your Face festival held at Fountain Square Brewing Co., joining a music lineup that also features The Palace, 800 lb. Gorilla, Okara Imani and Porch Kat. Having stayed busy with shows over the summer of 2021, the Indy-based funk band is set to release their latest EP, Give It Time, following it up with a performance at the newly renovated Taggert Memorial Amphitheatre at Riverside Regional Park on Sept. 30.

“The Bluebird was pretty much home base,” Clardy says. “There was a point in time where we thought we were cutting back, but we were playing a Wednesday, a Saturday, and then probably one other day every month there. That was definitely the starting ground.”

Spawned from a band that was first called Sweeney, Huckleberry Funk came into its own when Clardy, keyboardist/saxophonist Alex Dura, and bassist Matt McConahay joined the group.

“There were always ‘originals’ floating through the band,” Clardy says. “They just stylistically changed as all of us got added. Once me, Dura, and Matt kind of became the core of the band, that’s when the writing took off.”

After cutting their teeth in Bloomington, Huckleberry Funk relocated to nearby Indianapolis. Upon arriving in the Circle City, the band quickly got to work, taking part in the revamped Battle of the Bands competition that took place at the Hi-Fi and Vogue. Over the course of making it to the finals and finishing second, Huckleberry Funk says they learned some important lessons.

“I think it almost gave us a kick in the ass after losing,” Clardy says. “It was just like, ‘Man, we know how good we can be if we put this type of energy into it. But we need to remember to have more fun with it.’”

“The No. 1 thing we all agreed on was, ‘We’re never, ever going to stress this much again,’” Dura adds.

In reflecting on the environment they hope to create at their shows, Huckleberry Funk says they aim for a living room-type feel.

“We want it to feel loose but to an audience’s perspective,” Dura says. “You won’t see us cuing things on stage — we just know when to go places. That’s where it looks loose to the audience. But to us, we know exactly what’s about to happen.”

With the loosening of COVID-19 restrictions in recent months, Huckleberry Funk has stayed quite busy with gigs.

“The appetite for live shows is insane,” McConahay says. “We’ve done so many outdoor shows this year compared to previous years. It feels like we’ve just been on the run since the summer started.”

Following the release of their latest EP, Give It Time, on Sept. 24, Huckleberry Funk will perform a special show at the Taggert Memorial Amphitheatre on Sept. 30 featuring some of the musical friends they’ve made in Indy over the years.

“We’ve had this idea to do a Huck Funk and Friends show because we’ve got really cool friendships with some of the doper artists in the city,” Clardy says. “We were just like, ‘Let’s make a show out of it.’”