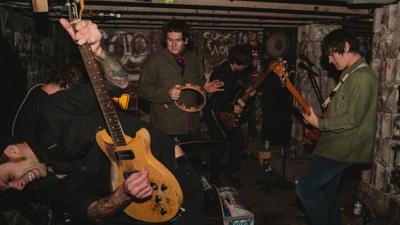 The raw rock ‘n’ roll energy of Indianapolis band Hyper Tensions can best be illustrated by an oddball show they played at one of Indy’s swankier cocktail bars.

“We went in, and they were packed full of people, and I was like, ‘I’m not real sure about this,’” says Hyper Tensions guitarist/vocalist Ryan Dunn of the time his band played at Thunderbird in Fountain Square. “But once we did our soundcheck, there were spoons spinning on the table because most of the people had ran out of there.”

Originally founded in Evansville back in 2010, Hyper Tensions made the move to Indy last year, quickly finding their feet amidst the city’s upper echelon of rock ‘n’ roll acts. After releasing a split with Illinois band Hans Predator in 2019, Hyper Tensions returned on Sept. 4, 2020, with their latest full-length, Evil Seeds, which received the vinyl treatment via Bloomington-based label Let’s Pretend Records.

While drinking beers in the backyard of their Fountain Square home, Dunn and fellow Hyper Tensions founding member Jarry Snyder (bass/vocals) laughingly look back on their band’s humble beginnings in Evansville.

“When we started playing, we lived a few blocks down from this really trashy bar that would have a punk rock night once a month, so we’d play that all the time,” Dunn says. “There was also a venue called PG there for seven years or something. It was the only actual small venue in Evansville, so if you were a band you had to play there and it was awesome.”

While Hyper Tensions were still navigating their sound during these younger years, Dunn admits their overall mindset has stayed pretty consistent.

“It started out way more rock ’n’ roll, like Chuck Berry riffs and shit like that,” he says. “But the lyrical content has pretty much stayed the same, about drugs and being weird.”

After calling Evansville their home base for several years, Hyper Tensions eventually decided to move to Indianapolis, where they saw many more venues to play at regularly.

“Once PG closed down, we started moving up here,” Dunn says. “It closed down, and we were just like, ‘This fucking sucks. I don’t want to go through this again.’ We went through so many stages of having venues versus no venues.”

While making the transition to Indy, Hyper Tensions also found themselves in need of a new drummer — a conundrum they’ve had to tackle a time or two throughout the band’s existence.

“We kind of have a Spinal Tap situation with drummers,” says Snyder with a laugh. “I think we’re on our fourth drummer now.”

But as Hyper Tensions started putting its feelers out, they quickly found the perfect drummer fit in longtime Indiana staple Josh Morrow.

“Me and Josh had to go on a date before Jarry moved up here,” Dunn says. “We went to the Brass Ring, and he and I just got hammered and talked about stuff to see if we were a good fit.”

He continues, “We both have the same poster of Dumb and Dumber framed in our house. I was just like, ‘Are you serious? That same one where they’re on the bike?’ We both lost our minds, and I was like, ‘All right, this is it. You’re in the band.’”

Hyper Tensions is now fully acquainted with Morrow as its drummer. Unfortunately, they’ve been unable to play as much as they’d like due to the coronavirus pandemic.

“God damn, I wanted to play a show, but it didn’t feel totally cool,” says Dunn, when asked about the decision not to have a release show for Evil Seeds. “I just feel weird asking people to come to shows right now.”

While they’ve been unable to play live, however, Hyper Tensions have remained busy, writing new songs with Morrow now in the mix.

He continues, “We’re pretty much trying to put another record out as soon as we can. Us and Cairo Jag were also talking about doing a split of some sort, just to have some more stuff coming out. They’re in the same boat as us and don’t want to play right now. So I guess we just keep writing as many songs as we can and pump out recordings because that’s all we can do.”