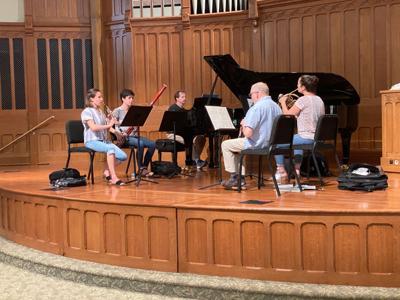 Ronen Chamber Ensemble co-founder David Bellman [with Ingrid Fischer Bellman] emailed, "we're live." Their 38th year continues their founding mission to allow music lovers to hear both the small intimate works by great masters and the new, fresh contemporary works for chamber ensembles "in a setting that lets listeners hear and see music-making at close range," underscores Bellman. "The presentation is very casual with time for audience members to talk with players after the performance."

Ronn's mantra: "Joyously sharing music" extended to Lily's Music Academy online during COVID-19 as an outreach to people of all ages—though the primary audience was the youngest among us, added Ronen co-founder Ingrid Fischer Bellman.

In addition, throughout sequestering, The Ronen has played as a pick-up ensemble on porches, driveways, cul de sacs, parks —whenever weather permitted.

"We open with Cinq Pieces en Trio by Jacques Ibert (1890-1962) for oboe, clarinet, and bassoon (1935). This will be played by Jennifer Christen, oboe; David Bellman, clarinet; Ivy Ringel, bassoon. All three ISO principals," said Bellman. clarifying, "one is a former principal; I am retired."

Sonata in G minor for Piano and Cello, Op. 5, No. 2, will be played by Gregory Martin, piano, and Ingrid Fischer Bellman, cello. Gregory Martin is on the music faculty at the University of Indianapolis; Ingrid Bellman recently retired as an ISO cellist.

Vignola, named on the "Five Most Admired Guitarists" list by guitar legend Les Paul, will perform with Lark in music by Thelonius Monk, Herbie Hancock, George Gershwin jazz-inspired renditions of Grieg, Poulenc, Kreisler, and others. His citation describes his "stunning virtuosity [that] has made him the guitarist of choice for many of the world's top musicians, including Ringo Starr, Madonna, Donald Fagen, Lionel Hampton, Tommy Emmanuel, John Lewis, and the Boston and New York Pops.

Vignola responded to an email Q/A:

RITA KOHN: Like Tessa Lark, you easily cross musical genres: swing, fusion, gypsy jazz, classical, pop. What has been your lure to be all-embracing—as a lead-man and as a sideman?

FRANK VIGNOLA: I love all kinds of music, but I am really a jazz guitarist who plays a few classical pieces in my own style. Tessa is truly a genre-crossing artist. She can play a Beethoven symphony one night and then jam on a John Lewis jazz classic like it's nothing. An amazing talent.

KOHN: Your vehicular accident thrust me back in memory to the story of Indy-native/jazz great David Baker. I admit to following how you have come back despite all predictions you'd not play again. And, wow, here you are with Tessa Lark. What has transpired is an inspiration. Thank you. So, moving forward, what is the specialness for you—and for us— on July 23 at Indiana Landmarks with the IVCI? Why did you and Tessa frame this particular program?

VIGNOLA: The accident was tough. With eight broken bones, two collapsed lungs and eventually four surgeries in five months to piece my arm back together, it took a long time to recover and feel whole again in body and spirit. I feel so lucky to first be alive and now working in a duet with Tessa. She is one of the greatest musicians I have ever had the pleasure of sharing the stage with and certainly the best violinist I have ever collaborated with. We were supposed to play together for you years ago, but I had to cancel due to this accident. Knowing that this was a possibility in the future was a big part of me having the strength and will to recover and play again.

One of the greatest inspirations for me were the classic violin and guitar duets of the '20s and '30s. Joe Venuti and Eddie Lang, Django and Stephane were in my ears from an early age. I love the sound of the violin guitar combination. It is a huge challenge for me to even come close to matching Tessa's brilliant tone. I have to break out the vintage Gibson for this duo. For me, it's exciting to perform our first full-length concert on so many levels. As for David Baker, an icon! The last time I saw him, we jammed on Ellington tunes for a good hour. So much fun.

KOHN: What now is the thrust of your abiding commitment as an educator? What's happening with your 'live jam over the web'? What's the embrace of your publications?

VIGNOLA: One of the silver linings of taking eighteen months off to recover was setting up a subscription-based guitar education site through the good folks at Truefire.com. It has been a lifesaver as far as keeping me interested in music. It has grown to over 600 subscribers who love jazz guitar. It's a great community of folks. Now, with the advent of zoom, I have been holding these 10-week learning clubs focused on a theme or composer. Each week for ten weeks, we jam on the ten tunes. The "mute all" button is an educator's dream. Lol

KOHN: What more do we need to know about guitarist/educator Frank Vignola and your forward momentum?

Violinist Tessa Lark is a recipient of a 2018 Borletti-Buitoni Trust Fellowship and a 2016 Avery Fisher Career Grant, Silver Medalist in the 2014 International Violin Competition of Indianapolis, and winner of the 2012 Naumburg International Violin Competition. Is one of the most captivating artistic voices of our time. A superstar in the classical realm, she is also a highly acclaimed fiddler in the tradition of her native Kentucky. Since making her concerto debut with the Cincinnati Symphony Orchestra at sixteen, Lark has appeared with dozens of orchestras, festivals, and recital venues which include Carnegie Hall, Ravinia, San Francisco Performances, Marlboro Music, Lincoln Center's Great Performers Series, the Concertgebouw in Amsterdam, and Australia's Musica Viva Festival. Recent and upcoming highlights include debuts with the Seattle and Indianapolis symphonies and the Buffalo and Rochester philharmonics. In January 2019, she made her debut with the Albany Symphony Orchestra in the world premiere of SKY, a bluegrass-inspired violin concerto written for her by Michael Torke, and since then, she has performed the work with numerous other orchestras.

In 2020, Lark received the Lincoln Center Emerging Artist Award, the Hunt Family Award, and a Grammy Nomination for Best Classical Instrumental Solo for her recording of Michael Torke's Sky Concerto.

She is a graduate of New England Conservatory with an Artist Diploma from The Juilliard School. She plays a ca.1600 G.P. Maggini violin on loan from an anonymous donor through the Stradivari Society of Chicago.