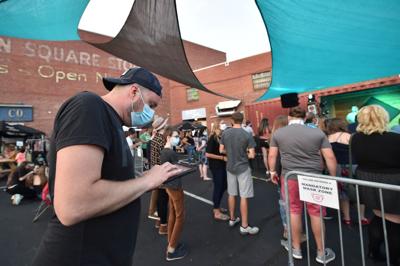 Much as they are worldwide, Indianapolis music venues face an uphill battle as they fight to stay alive amidst extended closures and cancelations caused by the COVID-19 pandemic.

Since mid-March, Indy bars and nightclubs have been faced with a tidal wave of challenges, as government and safety officials have done all they can to keep large gatherings from taking place. Originally forced to shut their doors entirely, some Indy music venues have found ways to temporarily make due while others have still yet to open their doors since the initial March shutdown.

While few permanent venue closures have yet to occur in Indianapolis, many club owners warn of danger on the horizon.

“I think we’re just barely at the tip of the iceberg, with restaurants closing and things like that,” says White Rabbit Cabaret co-owner Debra Silveus-McGaha. “It’s only just begun, and I worry that the public doesn’t really understand that. It’s truly on a month-to-month basis right now.”

As state and local officials have enacted restrictions on public gatherings, local music venues have been faced with their unique challenges, with some being able to pivot to outdoor performances while others have been forced to host indoor shows at limited capacities. However, no matter how you slice it, these options are simply not sustainable long-term, as colder weather looms and limited capacity performances simply don’t pay the bills.

After closing their doors to the public in mid-March amidst the country’s first extensive coronavirus shutdown, Hi-Fi owner Josh Baker was excited to get back rolling again at 50% capacity indoors, as his venue was slated to host Bloomington soul band Huckleberry Funk on June 20 as part of their grand re-opening.

When he began looking to book other future limited capacity shows inside Hi-Fi, Baker quickly found a larger hurdle to overcome.

“We were trying to book the schedule out inside, and there was a day where I got like 15 responses saying, ‘We don’t want to play inside,’” Baker says. “So here I am, like, ‘Fuck. After months of waiting, we did our first show back. We want to do more shows, but now nobody wants to play inside.’”

Quickly realizing that this issue would be ongoing, Baker began work on an outdoor stage (Hi-Fi Annex), transforming a shipping container into a stage and successfully turning the back parking lot of Fountain Square’s Murphy Arts Center into a safe, open-air space for concerts in just three weeks.

While Baker now has a calendar of shows booked at the Hi-Fi Annex through the end of October, he admits the outdoor space is only a temporary bandage to long-term struggles the Hi-Fi is facing.

“Being able to open outside sends a little bit of a false illusion that everything is fine,” Baker says. “Yeah, you’re generating some revenue. But in the reality, the bottom line is it’s not really sustainable.”

He continues, “We’re not recouping any money we lost prior to this. We’re not rehiring the 15 people we had to lay off. But what we are doing is we’re able to show that we are versatile and are trying, and we’re also able to put some money in the pockets of our local artists, which have also not been working. That brings all of us a lot of pleasure.

Like Baker, Black Circle owner Jesse Rice was also able to pivot his venue’s functions outdoors, as he and his team quickly constructed a stage in the Black Circle lawn, aptly naming the space Beer Creek. Since unveiling their revamped outdoor stage to the public in mid-June, Black Circle has hosted a full slate of events, ranging from comedy to live music to drag. As a matter of fact, last month marked the venue’s most successful month to date, even dating back to pre-pandemic times.

“It just happened to fall that way that we had five Saturdays [last month],” Rice says. “August was actually our biggest month ever since we’ve opened, revenue-wise. But we were in the hole so bad the previous four months that it really didn’t even catch us up. It’s great to see that, but it’s a lot of hustle.”

As the colder months roll around, Rice says he and his team are open to ideas on how to shield against the elements. “We’ve talked about fire pits outside or enclosing the patio, kind of like Twenty Tap,” Rice says. “But if we’re expecting another wave of COVID, or if people are going to have the flu and be sick, I don’t know how much they’re going to want to do outside anyway.”

All in all, Rice just hopes that visitors feel safe when attending shows at Black Circle.

“The people that are coming out are comfortable in making that decision,” he says. “What I’m actually worried about is the people who aren’t coming out. We want to make sure that we’re letting those people know that we’re making the right decisions for the community.”

Like all other venues that have reopened thus far, White Rabbit Cabaret co-owner Debra Silveus-McGaha is doing all she can to ensure customer safety at her venue. In addition to mask regulations, the White Rabbit Cabaret conducts temperature checks upon arrival, while also using plexiglass shields, sanitation stations, and more inside the venue to help stop germs from spreading.

All of this being said, Silveus-McGaha admits she would simply consider just staying closed, if that was a feasible alternative right now.

“We just don’t really have an option,” she says. “I feel like every business owner during this pandemic has had to make impossible decisions. If there was outside funding and we could be supported and remain closed until this is over, that would be something we could explore. But that hasn’t been an option for multiple business owners — us, restaurants, you name it. Everybody’s been forced into making these very uncomfortable decisions and just trying to do our very best.”

In addition to revamping indoors for safety protocols, Silveus-McGaha points out the financial loss that comes with being an already small venue that’s now only allowed to be open at 25% capacity.

“Right now, I’m operating at maybe two days a week, and trying really, really hard at that to get those booked,” she says. “So it’s 25% of that. Those numbers aren’t even going to come close to paying the rent, let alone anything else.”

Having already closed and reopened once over the last six months, the Melody Inn is currently open at 25% capacity, with no live music.

In the Melody Inn’s case, Ondrish is pleading to be open at 50% capacity again.

“There’s a lead time for this,” Ondrish says. “You have to book bands, and that takes time. You’re usually booking a month to six weeks in advance. I understand the science of it, if they can’t tell you when. But it’s like, ‘God dang man. If you could give us half capacity with rubber gloves and masks, we’ll find a way to make that work.’”

Having still yet to open his venue, Jazz Kitchen owner David Allee is taking time to improve his space for the day when it can methodically reopen.

In the Jazz Kitchen’s case, problems with lesser capacity could potentially be solved by adding one extra show per night to the calendar (Note: The venue usually has a dinner show and late-night show when in normal operation.) However, Allee sees how this adjustment may not go over well with a touring act.

“I think where we’re going to struggle the most is bringing in the national artists,” Allee says. “I could probably talk a lot of local artists into doing a third show, or could even get a second local band to sub in for a whole different show. But if I bring in Victor Wooten or someone like that, I can’t just go, ‘By the way, now you get to do three shows.’”

With so many factors in play, it’s now clear that Indy’s diverse music venue landscape will need some outside help if it wants to remain fully intact going forward.

The long road ahead

As music venues have struggled to find their footing these last six months, there have been some limited resources made available to them in the form of grants and loans.

While these grants were much appreciated by all who received them (including every venue mentioned in this story), the fact still remains that these funds only serve as a temporary bandage for a gaping wound.

“These types of grants are very, very much appreciated and super helpful, and I don’t want to downplay that,” Baker says. “But they just barely scratch the surface with an entire concert season of revenue gone. It’s tough to fathom, and every business is a little bit different based on how their business model works. But as a venue that’s reliant on touring artists, we really have lost 100% of our revenue for March, April, May, June and July, and the bills don’t go away. Whether they’re deferred or not, you still owe them.”

As executive director of the Indiana Independent Venue Alliance (IIVA), Baker is urging Congress to pass legislation that would help ensure the stability of independent music venues going forward. In particular, the IIVA would like Congress to move forward in passing the Save Our Stages Act, the RESTART Act and the ENCORES Act.

“We’ve been firing these warning shots for a while, but this is real,” Baker says. “These aren’t just things we’re making up. We’re actually going farther than we thought we could go just because we’re stretching things so far, and we’re pivoting to outdoor and all these other things. But without Congress passing some legislation that is specific to this industry, I don’t know if it’s ever going to be the same again.”

Baker’s opinion is one that carries throughout the IIVA’s member venues as well, who urgently want Congress to get to work.

“The Save Our Stages Act would really change the entire game for venues,” Silveus-McGaha says. “We really need the representatives to come back from their vacation and help us. It’s not just venues — it’s everybody. They need an employment package. Everybody needs something, and it’s just a terrible time to be at recess.”

The U.S. House and U.S. Senate both recently returned to session on Tuesday, Sept. 8