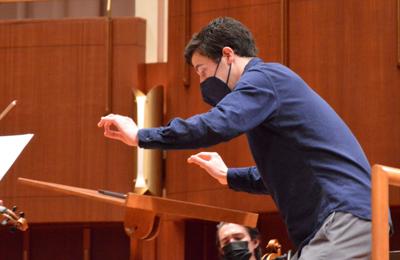 When a small ensemble of Indianapolis Symphony musicians gathered on the Hilbert Circle Theatre stage to record the DeHaan Baroque Virtual Series, on March 10, it had been exactly a year since performances had been canceled at the venue due to COVID-19.

The first video in the free online series, "What is the Baroque", is currently available for view.

Violist Amy Kniffen, who has been with the ISO since 1998, was excited to play the Brandenburg Concerto #3 in particular, but she was even more excited to be back on stage. “It's just a pleasure to play with my colleagues again,” she said through a mask.

Concertmaster Kevin Lin was also happy to be on stage. It was actually his first time on stage at the ISO, his second day on the job. His previous position had been a three-year stint with the London Symphony Orchestra. “We’re all really excited to be here,” he said.

The series, sponsored by the Christel DeHaan Family Foundation, features a variety of programs focused on the Baroque, with titles like “Vivaldi & Venice” and “Bach” and features the harpsichord, an instrument with a prominent role in Baroque music.

In addition to the roughly 15 minutes of performance, each video includes  10 minutes of commentary about the  music and interviews. Guests include Wynton Marsalis (who made several recordings of classical trumpet with Leppard) and Jeannette Sorrel (artistic director of Apollo’s Fire), and more.

Katie McGuinness, director of artistic planning at the ISO, said that the video series came together due to two factors. The first, she said, was the gift of the harpsichord to the ISO which belonged to the late music director and harpsichordist Raymond Leppard. The second was the ingenuity of Associate Conductor Jacob Joyce.

“Really it’s Jacob who's pulled it all together,” she said.

According to Joyce, many people are used to listening to Baroque music in the background but he wants to bring the music out of the elevators, as it were.

“Part of the hope of this series is to show to people how much variety there is but also how much interesting music there is, how much invention and composition there is and why it's relevant to today," he said. "So I find it to be particularly fascinating even though it was music composed 400 years ago."

The program topics include:

The series will be available for weekly viewing through Vimeo. Detailed instructions and a link can be found here.

His goal with the video series, which unfolds in eight episodes over so many weeks, is to make the music more relatable to people who might not be traditional concert goers. The performances will be on modern instruments, in an historically-informed style.

“Our goal is to make music relatable to a wider audience to people who might be intrigued by this kind of the docuseries format that we're presenting it in — and even for people who might not be traditional concert goers.”

Joyce is trying to cover as much musical territory in eight episodes as possible.

“So we have French Baroque, English Baroque, Italian Baroque, German Baroque, and that was part of the goal was to give a kind of comprehensive overview,” he said.

Nevertheless, there were genres of Baroque music that they had to leave out.

“It's restricted instrumental music, and there's tons of Baroque vocal music but to the extent that we can provide a full picture, that's the goal of the programming — is to get a little bit of everything.”

And while that smorgasbord of Baroque music might not provide a scholarly overview of that period, it should, according to Joyce, be very satisfying.

“They'll get something in a 20-minute episode here that's interesting, that's engaging, that relates to the daily experience in 2021," he said.