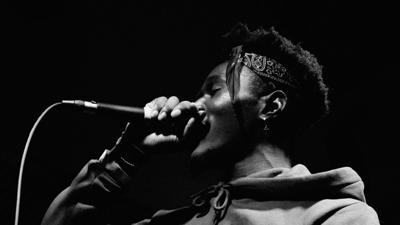 With his latest Why Bother project, Indianapolis rapper Baby Ebony is looking to provide listeners with an escape from 2020 happenings.

“Since everything was going on, I just wanted to put out something that would lighten the mood in a way,” Ebony says. “So it’s some fun music, other than the harsh reality.”

Released on Sept. 1, Why Bother is a collection of nine feel-good tracks, perfectly suited for an afternoon chill sesh on the porch. Following several standout singles over the past few years, Why Bother marks yet another impressive notch in the belt of Baby Ebony, who’s quickly becoming a local hip-hop force to be reckoned with.

Like many Indianapolis emcees, the story of Baby Ebony (who formerly went by the name Dose) begins at longstanding studio CityDump Records.

“Icon was one of the first people to record me,” Ebony recalls of a formative CityDump experience. “Bangers By One actually came through my session and liked what he heard, so he reached out to me.”

As one thing led to the next, Baby Ebony quickly found himself in a studio with a group of rising young hip-hop talent, where they’d collectively compose an EP in a Weekend via local nonprofit Musical Family Tree.

“A day or so after meeting Bangers, he messaged me on Instagram and told me to come through,” Ebony says. “I was in a room with Poindexter, New Wave, Human, Rehema, Mula, Swan, Fresh, Fazle and all these people that I’d studied and was aware of. We created an EP in a Weekend for Musical Family Tree, and that’s how I got my introduction to everyone.”

Out of this EP in a Weekend crew, one individual that Baby Ebony really jived with was Mula Kkhan. The two now have a duo of their own called Switchblades.

“I know a lot of alternative artists. But, to me, he executed while doing alternative trap,” says Ebony on why he was first drawn to Mula Kkhan. “He was actually rapping and had things to say that I could follow and understand.”

“He’s been an absolute ride-or-die homie,” Ebony says of Huber. “He’s someone I can always trust in my corner and someone who’s willing to go the extra mile to help me present my art to the world in a way that I couldn’t before.”

With more music in the works, Baby Ebony says the follow-up to Why Bother will touch on more pressing issues related to social injustice in America. “The album that’s coming next will be more about social issues,” he says. “It’ll be more real and heartfelt about what’s going on right now.”

In the meantime, though, Baby Ebony’s hope is to “lighten the mood” with Why Bother.