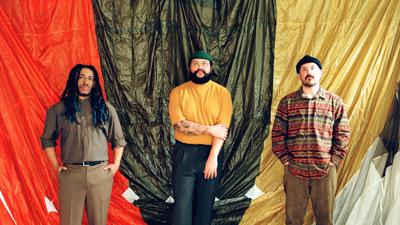 Amidst all the ups and downs of this past year, Oreo Jones, Sirius Blvck, and Sedcairn Archives — the Indianapolis trio known as 81355 — can clearly pinpoint the craziest text they received in 2020.

“It said, ‘Bon Iver likes the record and wants to sign you to his label,’” Blvck says.

A collaboration that’s been many years in the making, 81355 (pronounced bless) will release their debut album, This Time I’ll Be of Use, on Friday, May 28 via 37d03d — a record label founded by Aaron Dessner, Bryce Dessner, and Justin Vernon (a.k.a. Bon Iver). Having already produced mesmerizing singles like “Capstone,” “Hard 2 Find,” and “Tidal Wave,” the hip-hop trio are ready to take the world by storm as they enter a new chapter in their longstanding music careers.

All pillars of the Indianapolis music scene in their own right, Oreo Jones, Sirius Blvck, and Sedcairn Archives originally collaborated on the Naptown hip-hop classic, “Tribe Quest,” back in 2014. Featured on Sirius Blvck’s Light in the Attic album, “Tribe Quest '' came on the heels of a 2013 collaborative album from Oreo Jones and Sedcairn Archives (then known as DMA) made together titled Highway Hypnosis.

“We were finishing a track, and we were like, ‘Let’s end it crazy and get Moose [a.k.a. Sedcairn Archives] to come in,’” says Blvck of the “Tribe Quest” process. “The track ended after that hook, and then Moose added that bass line and did that crazy outro.”

After remaining closely connected over the years, the three Indianapolis music staples eventually decided it was time to make a full-length album together. Unfortunately, 2020 had other plans.

“In March 2020, we were originally going to get together and do a project,” Jones says. “There was no name and no real intentions. It was just going to be a project. The pandemic happened, and we had to pump the brakes a little bit. “

As COVID-19 restrictions lessened little by little, 81355 was able to get back together, traveling to Fort Wayne for a weekend in July 2020 to record with engineer Matt Riefler. In no time, the tunes started flowing.

“One of the biggest things we took from the whole experience was how naturally it all came together,” Blvck says. “It just felt like it was the right time and the right place for us to finally have the capacity and the space to do a full project.”

“There really wasn’t any fatigue, and there really wasn’t any second-guessing of where we were at creatively, which is pretty unique,” Jones adds. “I’ve created with groups and in bands before, and I feel like the three of us are just in the zone. There was just natural cohesion throughout the whole process. We just kind of blacked out that weekend, and that’s ultimately what you strive for — to use it as a sixth sense so to speak.”

Along these same lines, 81355 feel that 37d03d is the perfect label for their project, considering its embrace of collaboration.

“The label essentially started off as a festival and residency in Berlin and New York,” Jones says. “They are a really collaborative label. All of our label mates collab together and have had some projects together in some capacity. We’re very collaborative as well. I think that’s the spirit of us in this project, and I feel like we fit into the fabric of this label.”

On the horizon, 81355 will be performing a few shows in 2021, including a special hometown appearance at the Hi-Fi Annex on Oct. 2. As they look ahead to more extensive touring in 2022, Oreo Jones, Sirius Blvck, and Sedcairn Archives are ultimately grateful for the opportunities they’re being granted through this new 8155 project.

“We’ve been doing this for a while, but it almost feels like we’re starting over again,” Jones says. “It’s been cool having these moments where the team is showing us these countries that are playing our songs. We’re having opportunities to get a booking agent. We have all dreamed about this stuff at one point — being able to put ourselves in a position where it’s more than just a hobby.”

“I got that text and was  like, ‘Okay. That’s all the affirmation I needed,’” Blvck adds. “It was like, ‘Alright. Now I’m ready to work even harder.' I just needed something to give me a little fuel and let me know that I’m not crazy. As an artist, sometimes you need those affirmations from the universe to let you know that you’re still moving in the right direction, and that was definitely one for me.”