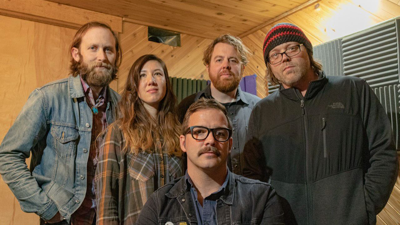 Audience members will play a huge part in determining who will take home grand prize at the 2019-20 Hi-Fi Battle of the Bands, sponsored by MOKB. It has been the biggest Battle ever hosted in Indiana, with 72 first-round participants. Only local talent from Indiana was showcased, making that number even more impressive. The competition began on October 2, 2019 and will come to its conclusion February 15, 2020.The winners will be rewarded with a grand prize of a touring van, a round of vinyl pressings, and $10,000.

Final ranking will be determined by a combination of judges' votes and audience votes. Each audience member will vote for three bands, and the outcome of those votes will make up 62.5% of the final scores. My goal with this series of articles is to give you a chance to get to know each of these eight finalist bands a little better before the finale at the Vogue.

Bringing the group together

Believe it or not, finalist group J. Elliot was not even going to be able to play in the battle originally. They were one of five waitlisted bands, and by luck they ended up getting in.

J. Elliot has been a solo project up until this point. Jay Elliot has been working on this solo project since 2016. Jay decided he wanted to get a group together to compete in the battle of the bands. He first reached out to Ryan Koch. Ryan and Jay had been working together on various projects for years. Jay’s last record was produced and recorded at Ryan’s Arkbarn Studios. For the battle, Ryan will be on drums and backup vocals.

Next, Jay reached out to Clint Cumberson. Jay’s previous band Stereo Deluxe had played with Clint’s band MODOC, and Jay knew that Clint’s playing style would work well with his current project. Clint and Jay first began playing together back in 2006. Jay said when he asked Clint to play was when he began to feel like the universe was leading him in this direction.

“I had asked Clint if he had much experience playing slide, and he said that he didn’t, but that not even two days ago he had bought a slide and other equipment to start learning it. It was perfect. It was a sign. So I told him I would teach him how to play these songs on slide and it would give him a good foundation for it going forward.”

Jay first played with Ryan and Mina Keohane at The Chatterbox, filling in for a member of the band Sarah Grain and The Millions of Stars, a band that both Ryan and Mina are in. Jay was worried at first that Mina would not be able to help him because of all of her other musical projects. Mina plays in several bands and is a first-call keys player in town. But she agreed to fit Jay’s project in.

Tim Fuller and Jay have known each other for years but did not begin working together until a year ago when Jay was invited to perform at The Fourth Sunday Music Group Scholarship at Postal Recording Studio. Tim played bass for that track, and Jay knew that he would be able to bring to life the kind of sound that he was looking for.

Everyone in the group knew each other, or knew of each other, prior to working on Jay’s project.

So it was not a question of if they would get along or be able to make good music together, but Jay felt like it was a huge ask of everyone to have them help him bring his music to life in a live setting. The group says that they are confident that they will do other shows together in the future; they will just need to book it far enough ahead of time that everyone can clear their schedules.

This interview was only the ninth time the group has all been together while participating in the battle. Two shows, and three practices before each show, and this interview that will turn into a practice.

Getting to know the members

Everyone in the group is a career musician. Jay has his solo project, which may not stay solo for long. He also does entertainment gigs at local restaurants, performs solo, and he will on occasion perform a duo with Ryan.

Clint is in the band MODOC, working with Jay, and also working on a solo project.

Tim jokingly said he would play with whoever was paying. But he is an active member in the band Indiana that has been working together for nearly 10 years, plus a band called Circle City Royals (formerly known as Sour Mash). Tim also works with a blues artist and is in a Jerry Garcia tribute band called Star Cat.

Mina is in Sarah Grain and The Billions of Stars, the Copacetics, Jeff Kelly and The Graveyard Shift, and her band Mina and The Wondrous Flying Machine. Mina also makes music for commercials by day.

Musical influences for the J. Elliot project are Tom Petty, Blake Mills, and Paul Simon. Another personal influence for Jay, who he says will not likely show in the project, is Father John Misty.

In their dream collaboration with one living and one dead artist, I will let you see if you can match them:

(Mina gave two for each because Tim did not want to give an answer on the spot.)

For musical guilty pleasures and/or the musician each member thinks people will be surprised to hear they listen to, here we have them:

For potential venues Jay wants to dream big, listing things like Red Rocks, Wembley Stadium, Madison Square Gardens, RCA Dome, and Market Square Arena. His sentiment is “We are open to whatever the universe presents us”. The group members have all been performing musicians for 20-plus years, so there are not many venues left that they haven’t played. They are excited to play The Vogue as a group. In the current lineup, it will actually be Clint’s first time performing there.

Jay’s future musical aspirations include achieving self sustainability as a musician. He would like to be able to support himself, and possibly a family in the future, on income earned from being a musician.

“Having the ability to earn a decent living, cover my expenses, have some walking around money, and be able to put some back for savings. All on my work as an artist, on my music and music with others. That is my definition of making it.”

Sendoff and other stuff

A final sendoff to the other bands from Jay:

“We are honored to be on stage with you all, and we look forward to playing with you, but at the same time we hope you all lose. So in lieu of break a leg: good luck.”

And to the fans, “We are trying our best to present the music in a way that you will enjoy, and understand, and have a hell of a time listening to it.”

The new single for J. Elliot will release on Saturday, February 15 at The Vogue. It is set to digitally launch on streaming sites while the band is playing their set. The single is titled “How to be a Man.”