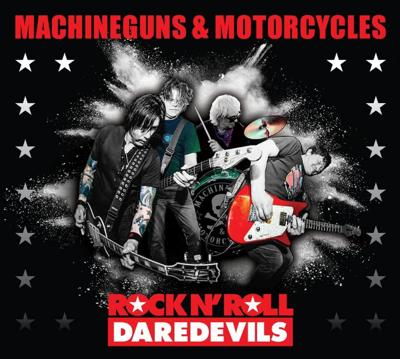 If I had a time machine

I’d take it back to this time

When rock n’ roll was in its prime

This lyric, from the second song on Machine Guns & Motorcycles’ glorious new record, Rock n’ Roll Daredevils starts off a litany of that year’s incredible musical offerings rattling off albums by everyone from B.T.O to UFO. It’s a fun bit of hard-rocking history. One line, “Those were the days of the big rock star,” seems to turn this look back on the good ol’ days into a statement of purpose.

You can pick up a copy of Machine Guns & Motorcycles’ Rock n’ Roll Daredevils this coming Friday, July 23rd, at Black Circle Brewing’s Punk Rock Night. Outdoors! All Ages! 7 Bones gets you in the door, and CD is extra.

Indeed, Rock n’ Roll Daredevils is a loud, razzle-dazzle blast of summertime glory drenched in alcohol, attitude, and denim. Just like the kind the dinosaurs used to make.

The album lunges out of the gate with “Evel Knievel,” a sing-songy catchy as balls celebration of the daredevil master of motorcycle jumps and broken bones. “Cosmonaut” is this collection’s stand-out track. A loud, snotty blast of swagger, this is the kind of tune that deserves a place on every summer ’21 playlist. “Make it Through” is a good time, while the cover of “No More, No More,” an Aerosmith classic from – wait for it- 1975, pays homage to every hair band that rocked this song in The Enterprise, or Bentley’s back in the day.

Band leader Wayne Griffith is a helluva songwriter and has the sort of voice that is instantly recognizable and balls deep with the rockin’. Dave Lawson has seasoned his lead geetar playing with breathless speed, class, and the lingering ghost of Terry Hollywood and is stepping out into the spotlight as one of the best Midwestern axemen. What the fuck hasn’t been said about Mark Cutsinger? His drums just pound these songs into your skull, and you can’t help but marvel at what a giant treasure and rock hero this cat is. Finally, on Bass Guitar and curb appeal, John Zeps pours the warm, sticky sex jelly that keeps this mess together.

Recorded at the Pop Machine and produced by the motherfucking wonder twins, Eric Klee and Marc Johnson, Rock n’ Roll Daredevils is proof positive that the art of Rock in its full mid-seventies glory is not a dying craft, and as long as bands like Machine Guns & Motorcycles keep flying the flag, it will never die.