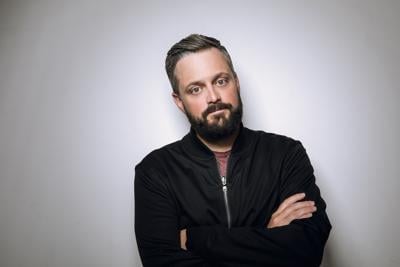 If it weren’t for The Bob & Show, comedian Nate Bargatze may not be where he is today.

“Bob & Tom was a big part of me starting comedy, just from listening to all the comics,” Bargatze says. “When I was just working and thinking about doing comedy, that was about the only radio show I could listen to that you heard stand-up comedians on. I’d listen to it every morning and hear different comics come on, and I’d think, ‘I want to do that.’”

On Friday, Oct. 16, Bargatze will head to Indianapolis for a socially distanced show at Tibbs Drive-In Theatre. Ahead of his performance, our Seth Johnson caught up with the famed comedian for a phone interview.

SETH JOHNSON: How was your quarantine? What were some ways that helped you pass the time? I know you started your podcast, Nateland, back in July.

BARGATZE: We started the podcast. That was one of the main things we did. And then, honestly, I golfed. I’m pretty obsessed with golf to begin with, so I just went even harder and tried to play every day because I literally had nothing. A lot of people with regular jobs could work from home. But with comedians and live performance, they really knocked out our business.

Golf is a perfect quarantine sport too. It’s outside and away from others. So I just did that to try and stay busy, and I made it through.

JOHNSON: How did the idea for your podcast come about, and why was it something you wanted to pursue?

BARGATZE: I’ve always debated doing one. And then, when this happened, it was like, ‘Alright, I want to do something.’ So we started it…a couple comics and me…Brian Bates and Aaron Weber. They are national comics that all live in Nashville. I wanted to do something that fit along with my stand-up. It’s not political or topical. It’s just trying to be funny.

The whole goal of this podcast is to be an easy listen. The weight of the world is not on you while you listen to the podcast. We’ve done 11 episodes or something so far, so it’s plugging along.

JOHNSON: I’ve asked some other touring comedians this question, and I’m curious to hear your response as well. Prior to the pandemic, what was your 2020 supposed to look like?

BARGATZE: I was probably going to be doing 100+ dates, and I was going to tape a special in September. Then, I was going to stay out on the road and start building a new act. In my hometown, the Ryman is a well-known venue. I had that sold out. I was really making some good strides. Like, in the fall, we were going to go back to some cities and do some bigger places.

At the end of January, I began touring. And then, March 12 is when we stopped. So I would’ve been on tour the whole year, and it just got halted immediately.

JOHNSON: When did the idea for this drive-in tour come about?

BARGATZE: Bert Kreischer has been doing it. I feel like he’s our guinea pig as comedians. I honestly didn’t know if it was going to work out [for me]. Everything is so new, and it’s such a different idea. I just did a drive-in in Cape Cod, Mass., and it was just a field, but now they do drive-ins there. You have this thing that no one was going to, but now everyone is going to it.

So at first, I didn’t know if it was going to happen. But then, we got it together, and it was off and running very quickly. One Thursday, they told me, “Alright. I think we’re doing this tour.” And then, we announced it on Monday. We had to get the poster drawn up in like 24 hours.

JOHNSON: In Indianapolis, there have been some outdoor open mics happening with social distancing. Heading into these drive-in dates, did you get a chance to warm up before performing in front of large audiences?

BARGATZE: I did a little bit. There’s a comedy club in Huntsville, Ala., and they were able to be open at half capacity with everybody spread out. And then, at one point, Zanies in Nashville was doing 25%.

Here in Tennessee, we’re doing very good. Everybody is wearing their masks, and we’re slowly starting to at least get to half capacity. So I wasn’t able to do a ton of shows, but I at least was able to do some.

But the drive-ins are such a different thing because you can’t really hear the audience. It could be 50 or 60 feet to the first person. At a lot of them, people can sit outside in the little space outside their car. And if they do that, you can hear them up front, which is fun. So at least you’re hearing something, but it’s pretty different. [laughs]

JOHNSON: You mentioned the field in Cape Cod. Have you experienced any other bizarre circumstances surrounding these drive-in shows?

BARGATZE: You’ve got car alarms going off. [laughs] I’ve heard there’s a train at one of these places that goes by. The place is right next to a train track, but I’ll be outside. So that could hurt your act. There are a lot of variables like that. We had a helicopter go over. It wasn’t too bad. You have to have a good gauge and be like, “Alright. What is so loud that I need to acknowledge it?” With the helicopter, it luckily didn’t get too close. But it was like, “Eh, it’s getting there.”

JOHNSON: As a kid, did you go to drive-in movies at all?

BARGATZE: We did. I mean, it wasn’t a crazy amount. It was a special thing. There’s one not too far from Nashville, and we’ve taken our daughter there. Drive-ins are awesome, man. I hope this just revives all of them, and people realize, “Oh, it’s an activity you can go do.” I think you could do it all the time for bands. But with comedy, it’s nice to hear the audience a little bit.