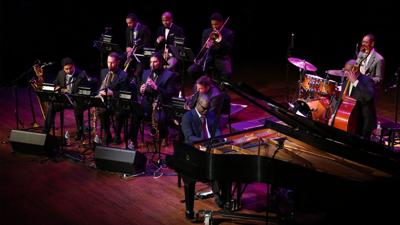 On the surface, I have little in common with jazz pianist Marcus Roberts.

Having worked with greats like Chick Corea and Wynton Marsalis, Roberts is no stranger to the big stage, now fronting his own group called Marcus Roberts and the Modern Jazz Generation. I, on the other hand, am a modest Indy journalist, who sits in front of a computer all day.

Believe it or not, however, there is one major similarity between my life and Roberts’ life. At the age of 5, both he and I suffered major vision loss, leaving him completely blind and me visually impaired. With this being said, our path through navigating disability is oddly similar.

Ahead of Marcus Roberts and the Modern Jazz Generation’s visit to  the Palladium on Saturday, May 4, I had the pleasure of chatting with Roberts over the phone, mentioning my visual impairment to him right off the bat. Below, you can read our full conversation, which touches on music, disability awareness, and more.

SETH JOHNSON: You attended Florida School for the Deaf and Blind — a school that Ray Charles also attended. That being said, was music a big part of the overall culture there?

MARCUS ROBERTS: Yeah, it was. But I really started in church when I was about 8. I was self-taught for about four years, which really doesn’t work too well for piano. So my parents found out about the school, and they sent me there, mainly to study music.

I remember three teachers there, and one of them gave me piano lessons every day. His name was Hubert Foster. He knew how to tune pianos. He knew how to build pianos. So he taught me piano and music theory. Then, they had another fellow (Mr. Middleton) who taught me saxophone and drums. So yeah. They had a real good program in music.

They also had a variety of things that all the children could do. I look back on it now and realize how fortunate we were. They had a guy who taught wood shop. They had a fellow who taught electrician work. They had a lot of stuff. [laughs]

JOHNSON: I personally had a few teachers that really helped me adjust to my vision growing up. Are there teachers from that school who stand out as doing the same for you?

ROBERTS: Oh man, a bunch of ‘em. My science teacher in the fourth grade was a really nice lady. She let me read ahead. So even in fourth grade, I was reading 6th grade science stuff. They didn’t hold me back or anything. And her husband was the gym teacher. They had us swimming, running, and doing all kinds of stuff. [laughs]

They did have good mobility instructors that taught touch technique with the cane. They had really high-level folks who typically had a graduate degree in rehabilitation and mobility. I was very fortunate to go at a time where I really think the level of teaching was very high.

In 10th grade, I was mainstreamed into the local high school in the morning, and then I went to Florida School for the Blind and Deaf in the afternoon for music. So it was a very preparatory period for me. When I got to Florida State, I didn’t have a lot of the issues that typical blind kids have with mainstreaming into the “normal” public.

One of the big problems is … people don’t know what’s appropriate, so they don’t really know how to help you. And a lot of blind folks, and folks with disabilities in general, don’t know how to ask for help. And even when you do, you can’t calculate what people’s response will be.

JOHNSON: Getting back to your musical path, I’m curious to hear what drew you to piano specifically?

ROBERTS: I honestly discovered it at church. I was maybe 5. My aunt had a piano. Sometimes, we’d go to her house, and I’d try to play it. Finally, my mother convinced my dad to get a piano to see if I really was interested or not. I was 8 at the time.

I’ll never forget. I walked in the house, and I didn’t really know what it was at first. But when I realized it was a piano, it was certainly one of the happiest days of my life, even up to this day. Because then I knew I could play it at any time, and that was a big deal.

Some of it may have to do with the fact that it’s a big instrument that doesn’t move. It anchors you in one place, so there’s a certain physical security. And you can do it by yourself. With a lot of other instruments, kids really play them to participate in social activities, like marching band. But if you’ve got a disability, you can play piano, and you’ve still got something to do if you are alone. It still demands attention, and it doesn’t isolate you.

JOHNSON: You mentioned Florida State University, but I also know that you played in Wynton Marsalis’ band afterward. Tell me about that experience and what you learned from it.

ROBERTS: He was the first person to hire me. I had tried unsuccessfully to get hired by several other people before that. Even with him, I don’t think he necessarily hired me because he liked my playing at the time. I think he could just tell I had a real ferocious interest in the music and a real dedication to it.

The biggest thing that I learned from playing with Wynton had more to do with watching how he led the band and how he wrote music. It was also intriguing to see somebody my own age who knew how to build a career. To this day, he’s always shown us ways to get things done in jazz that no one else has been able to do. There’s a lot of inspiration that you can gain from that.

But then, there came a point where I had my own music that I wanted to write. And I’ve always been really interested in training other young people. Even at blind school, I had a band when I was 12 or 13, and I taught all the kids how to play. We played Stevie Wonder tunes and a lot of pop tunes of the day, as well as some jazz.

I’ve always been interested in helping young people — mostly young people who may not have the star ability. But they’re people that did have talent and were committed to learning how to play. So I left [Wynton’s band], and I’ve done a lot of work in that area, mentoring a lot of young musicians.

I have a soft spot for young people in that situation. The disability may kick into it too. Because I know there are a lot of disabled people who just don’t get a lot of choices. In the blind community, even now, the rate of literacy among blind children is only 10 percent. These are very disturbing facts for me, and I don’t think they get enough attention.

I also feel that society in general is still afraid of disability. The culture doesn’t really know how to communicate properly. They don’t really know how to make the world accessible to disabled people in a way that maintains their dignity. In other words, if you see a blind guy, you don’t have to talk at 100 decibels. He can hear you.

In a lot of cases, I’ve found that people just don’t know what to do. So I think there needs to be broader training and acceptance of people’s disabilities. And there’s probably a way to use those interactions to work on other issues and prejudices that we find in our global community.

JOHNSON: You mentioned your current group [Marcus Roberts and the Modern Jazz Generation,] and that it consists of younger musicians that you’re trying to mentor. How did you come across these players?

ROBERTS: A lot of these young people I teach at Florida State University. And a lot of them are students that I worked with, and gradually, they became more and more interested in playing the music and more dedicated. I’d take them on occasional gigs with me. That’s how I met 90 percent of the musicians that I’m coming to Carmel with.

It’s been amazing to witness the transformation that can happen when young people play jazz music. Because a lot of them started out selfish and independent-minded, and they didn’t really want to work together. They’d argue and fight. But through the music, they’ve all become really good friends. They look out for each other. There’s a community element to this band that I really haven’t felt in a big group before.

JOHNSON: What kind of program can people expect when you come to town? Will you be playing all original tunes?

ROBERTS: This is all original music. We’re going to play music from a CD that I put out three years ago called Romance, Swing, and the Blues. It’s really a love story, if you will, about a couple who starts out mesmerized with each other. They end up falling in love and trying to make their way through the ups and downs of a modern relationship. There’s a main theme to it, which is introduced in many different ways throughout the suite.

Author's Note: In the case of Marcus Roberts, music education as a child wound up being very important. From your experience, what impact did childhood music education have on your life, whether you're still actively playing music or not?

Carrying the Torch: A Conversation on Indy Jazz Then and Now

Herbie Hancock Looks Back on Work with Indy Jazz Legends