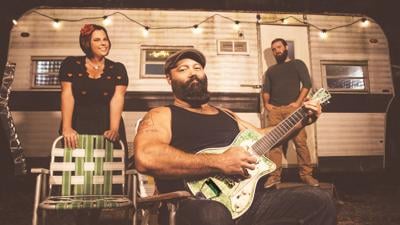 While the coronavirus pandemic sidelined them from their relentless touring schedule, Reverend Peyton’s Big Damn Band did all they could over the past year to stay actively and at work.

“At the end of this thing, I wanted to at least say we did everything we could do — we tried real hard to do everything right,” Reverend Peyton says. “So we did. With every restriction that was imposed, we worked hard to create inside those lines. If it meant making music videos where we could only gather 10 people up, then that’s what we did. If it meant we had to get everyone tested for the coronavirus a couple days before we got together to do our live stream, then that’s what we did.”

After releasing their latest album, Dance Songs for Hard Times, in April, the Brown County blues trio will make their triumphant return back to Indianapolis for a show at Hi-Fi Annex on Saturday, May 22. Ahead of the performance, our Seth Johnson caught up with Reverend Peyton for an interview, discussing the ups and downs of this past year and what it’s been like to finally get back in front of fans again. Read their full conversation below.

SETH JOHNSON: When the pandemic first hit, what was the Big Damn Band up to and what was your year looking like?

REVEREND PEYTON: Going back to the beginning of 2020, we did one show in early January, and I broke my thumb so I was out of commission for eight weeks. Then, in late February, we got back to doing shows. On March 3, I started getting sick. March 11 was our last show. By that time, everybody was sick. Breezy was really, really sick. I took her to the hospital on March 12 or March 13. At the hospital there in Bloomington, the doctor listened to her lungs and said, “You’re in rough shape. I want to do a CT scan and X-rays.” They tested her for everything. They tested her for the flu and strep throat. He didn’t have a way to do a coronavirus test, so he said, “I can’t test you for that.” It was too early in the game. It did come back that she had evidence of blood clots in her lungs. Her lungs on the scans looked pretty rough. She had a 102 temperature off and on for about three weeks after that. She was just in terrible shape.

Everything we had done our whole adult lives was ground to a halt. I think it was one of the roughest periods of my life, if not the roughest. I feel lucky to have come out of everything, but it was rough. My tour manager Shane’s granddad died of coronavirus. It impacted so many friends, family and fans of ours. We have an interesting perspective where we just know so many damn people all over the world. We were talking to people in New Zealand, Australia, and all over Europe and were able to get a feel for what was happening in those places.

At some point, I was like, “Well, we have to remain a band.” So many people were getting out of the music business and getting jobs at grocery stores and things like that. So we got set up to do live streams at our house because we finally got the internet at our place. There hadn’t been internet available down here where we’re at in Brown County for 15 years, but we finally were able to get it. So we got high-speed internet at the end of April or beginning of May, and we were able to do the live streams from our house. We started a Patreon and did everything we could. I had written all these songs during the period when Breezy was sick, and I wanted to get them recorded. We worked out how to do it.

JOHNSON: Were those songs what wound up being your latest album, Dance Songs for Hard Times?

PEYTON: Yeah. We were going to be making a record this last year — at least that was the goal. Everything got put on hold, but there was this period where these songs were pouring out of me. I felt, “How can I pursue what I had been working on when everything is different?” So everything got scrapped, and I started working on this other new stuff.

We had to figure out how to record it. We worked with a producer named Vance Powell in Nashville, Tennessee. We had to rent a house because we didn’t want to stay in a hotel. We quarantined ourselves off in this house so that we could go work with Vance because he was taking it real seriously. He wanted to help us make a record, but he didn’t want us to bring coronavirus into his place. So we made the record, and then it was like, “Well, how do we get it out?”

I did the artwork for the record myself. It’s the first time I’ve ever done that. We made music videos for four of the songs. One of the videos isn’t out yet. It hopefully will be next month. We just did everything we could to create and stay a band. I just knew that if we didn’t then that’d be it. I know so many bands that are done and aren’t coming back.

JOHNSON: Whether you were recording the album or making music videos, how did staying productive help you get through the rough times?

As an artist, it’s a compulsion for me. I don’t have much of a choice. I have to do this stuff. It is probably a borderline obsession. Even knowing everything that I know about coronavirus, it was still hard for me to stop playing shows. It was like coming off of a drug. I think the adrenaline you get from a show is almost like a drug. So I had to continue making music. I had these songs inside of me that I had to get out.

JOHNSON: On a lighter note, the “Dirty Hustlin’” music video features a puppet version of you. How did that come about?

PEYTON: For whatever reason, we love making music videos. I always wanted to make a music video with a puppet. In order to tell that story, you had to imagine if that story was told with a human being in that spot, instead of a puppet. It had to be really, really earnest, and not too dark or too cliché. So in order to tell this story, it just felt like the perfect time to incorporate the puppet.

Our friend Shelby Kelley, who’s done a lot of artwork for me over the years, had been doing this puppet show with his wife, who’s a teacher. I wanted the puppet to feel like a very traditional Muppets, Sesame Street-type puppet to help sell the irony of the situation. I contacted him and said, “Man, I’ve got this idea. Do you think you can create a puppet?” He said yes, so we started working on it.

He sent me some sketches, and it ended up being perfect. It’s in the running for one of our best videos, if not our best video, of all time. I’m really proud of the way it turned out. It was fun working with Shelby on it. He’s just a brilliant artist, and I had a great time doing it.

JOHNSON: When did the Big Damn Band first get back on the road, as restrictions began to lessen? What’s navigating that situation been like?

PEYTON: It’s sort of a trickle back. It’s not like a light switch has been flipped. It’s more like you're taking a faucet, and you’re slowly starting to turn that knob. The last couple weeks, we’ve been getting our feet wet just a little bit. And every day, it feels like that faucet is being turned on a little bit more and a little bit more.

It’s going to take a long time for things to get back to 100% because 20% of the venues we used to play don’t exist anymore. So it could take years before the music business is back to 100%. The music industry was completely shut down, and people don’t realize just how much live shows matter to real artists. We don’t get that Spotify money. It’s not enough to pay our bills, or even pay for breakfast. We need to do these shows to survive, and it really is the engine that runs the entire music industry.

JOHNSON: For you personally, what has that feeling of getting back out on the road been like?

PEYTON: I’m not gonna lie. At first, I was kind of nervous. I was nervous about what the crowd reaction was going to be. I was nervous because we hadn’t been playing live shows. But now, the nerves are gone. We did a couple shows this last weekend where it just felt normal and right. Everybody was so hopeful and happy. It was almost unlike anything I’ve ever really experienced. These shows coming back are way more joyous than I ever imagined they would be.