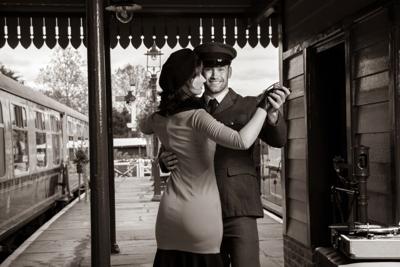 World War II was my childhood. My older brothers, along with brothers of classmates, by twos and threes went off to fight for our freedoms. At home we sang, “I’ll Be Seeing You.” It was the thrust of hopefulness to connect ourselves through ethereal and real places: “Somewhere Over the Rainbow, “White Cliffs of Dover,”  “A Nightingale Sang in Berkeley Square.”

We kept our spirits up dancing to big band swing and to jazz coming to us over the radio. And, everyone wanted tap shoes. Tap dancing equated patriotism. After all, tap dance originated in the U.S. as a fusion of our spectrum of ethnicities. Within the cocoon of World War II, we could create dueling improvisations to prove stamina right along with the troops persevering in places we were learning to locate on maps. Music was concurrent with daily life in the 1940s wartime.

The newly published Indiana University Press book, Music in World War II: Coping with Wartime in Europe and the United States, has enlarged my understanding of how music became a tool of war for allies and adversaries alike, as opponents became allies and allies became opponents in a shifting landscape of diplomacy. Music as propaganda wasn’t on my radar as a child. I just accepted whatever was presented as a path to good citizenship.

Music in World War II arrived late afternoon Nov. 5. I binge read into the wee hours of Friday, continued all day Friday, and from the crack of dawn today, Nov. 6. I’ve not fully sorted out/absorbed the newness of this collection of observations, edited by Pamela M. Potter and Roberta Montemorra Marvin, whose fathers served in WWII, and by Christina L. Baade, whose father was born in 1943, and thus grew up in the rebuilding decades.

The editors designed a book to show a broad base of music’s power to shape citizens and soldiers in wartime. They chose essayists whose imperative brings us into the moments of real people in a world of divisiveness. In my childhood household I was instructed, “We are fighting for ideals, for ‘liberty and justice for all.’ When the war is over and we are winners we have work to do to make America a safe place for everyone. Always make something better for everyone.” A powerful charge for a little kid.

Back cover quotes aside, what I most gained is how easily one can be manipulated by propaganda, by repeated untruths that eventually take on the cloak of “well, it must be true if everyone says so.” Then is now, in the cocoon-world of 2020, with the same techniques in faster time on broader-based social platforms — only then it was the other misbegotten leader in that other place who was misleading citizens with untruths into divisive behavior.

Reading, I recognized how imperative it is to know who I am as a citizen in a political entity, whose values I need to align with to make the world a better place every day through how I speak, what I do, why I strive with a sense of joyful forward momentum.

This is a very personal book. It reveals what I was totally ignorant of as I was living through valiant battles in support of human decency. I compiled a ream of notes to draw your attention to particular pages. Once at the computer, I persuaded myself instead to invite you to take the book in hand, and read at your own pace, and gain your own imperatives and understandings. In the wake of this undeniably different time —  2020 — I am seeing parallels with how bullies and demagogues ensnare us within their agendas until we lose our selfhood and we become minions to their shrewd bidding.  Music to this kind of person is a form of control to dehumanize individuality — to denigrate the essence of what makes each of us delightful.

Looking at the essays through this lens of music to undermine and music to uplift, I am beginning to unravel how music shapes a person, an event, a place, a people. While as a natural aspect, music is in our speech, our movement, our phrasing of thoughts into our world view, composed music has great power to uplift or diminish our very being. The preface to Music of World War II calls us to consider conductor Serge Koussevitsky’s 1943 imperative to “sing the song of love for [hu]mankind and faith in the ageless ideals of independence and democracy.”

The carefully-crafted introduction and essays that follow show the roles of music in allied and axis nations, and how leaders promoting different ideologies used the selfsame tool to bring its population into a singular mindset.  Music to manipulate listeners is not new to World War II; instead we learn music is distinctive to this event in its attempts to soothe and help us cope rather than to carry us into militancy.

Part One examines “Music on the airwaves and the screen.” A BBC radio host connects home front with war zones playing requested songs with messages of personal importance translating into public impact. The BBC plays music by composers whose birthplace represents an enemy entity. What’s right or wrong about this? Films made in the U.S. and in Russia are less diplomatic and more pointed at each other’s humanitarian loopholes.

Part Two thrusts us into the melee of “Opera, Theatre Stage and Concerts.” Politics and publicity surround music old and new — who will buy tickets to experience what kind of music at The Metropolitan Opera and on Broadway in New York City. Indiana’s Cole Porter had an edge into the market with a new musical every year — why and how did the Hoosier know so well the pulse of people in the midst of war?  The third essay in this mix seeks to uncover the truthful story behind a darkened concert venue in Vienna, while the fourth  walks us through the brief life of a resistance musical theatre in France.

Unless you lived within reach of prisoner of war camps in the U.S., you were unaware of the cultural shifts that would forever mark those small town locations as 425,000 Axis POWs were transported from Europe in large part to the Midwest. Music here became a combatant. That is, the US wanted to Americanize  German and Italian nationals into the feel of American music while the POWs clung to their national music.

The final essay returns to the power of the radio — this time in Germany, where Nazi leadership declared, “Everything is better with music” and monitored what people heard based on what would lead them to believe the Nazi party line of their superiority. And yes, the Gestapo borrowed the BBC format to solicit requests to connect the home front with the battlefield. No spoiler here. Read for yourself to learn what Germans under siege most wanted to hear as they hunkered down in their cellars and underground shelters.

While Pamela M. Porter’s Introduction to the volume is a sweeping overview of “Music and Global War in the Short Twentieth Century,” Annette Fauser’s “Afterword: Trans/national Soundscapes in World War II” wraps up what we’ve just read and concludes as I did, and you probably will too. This volume offers the beginning of a concerted backward view. More research awaits, particularly from my point of view regarding World War II music on the American Indian home front and on the global warfront, music in Japanese American internment camps, and music in Nazi concentration camps.

You can learn more about “Music in World War II” and place an order at iupress.org