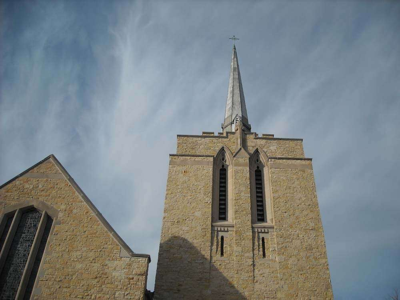 The December 6 Ronen Ensemble "Spotlight on the Voice" concert, at 7:30 p.m., takes us to Irvington's 120-year-old Our Lady of Lourdes Catholic Church, at 5333 E. Washington St.

Notice of this program came alongside two other messages:

November 30 at 6 p.m., "A talk by Lee Little, offered in-person at the Indiana Landmarks Center, at 1201 Central Avenue, and online via Zoom"

Lee Little, creator of the popular Instagram account Old Churches Indy and law librarian at IU McKinney School of Law, shares insights gained from researching and photographing more than 300 religious buildings around Center Township. A member of the Episcopal Church of All Saints and historiographer of the Episcopal Diocese of Indianapolis, Little has partnered with photographer Kati Gaschler on a newly published book, "Circle City Steeples," featuring 35 historic houses of worship. The book will be available for purchase at the talk.

Dec. 4, 10 a.m. through 2 p.m., Indiana Landmarks and Old Churches Indy are conducting a tour to explore the architecture, history, preservation, and tradition of ten historic churches built between 1891 and 1929 in and around Indianapolis's Old Northside neighborhood.

Ticket holders may check in at any time. Plan to at least three hours to explore seven church interiors, several church exteriors, and travel between them.

You also connect with https://www.gpsmycity.com/tours/historical-churches-walking-tour-4815.html

I reached out to Gregory Martin for more about the December 6 Ronen Ensemble program:

Gregory Martin: This year's Ronen season finds the group playing around Indianapolis in various venues, and Our Lady of Lourdes seemed an ideal location to present Bach's great cantata Wachet auf (Sleepers Awake). It was first performed on November 25, 1731, and employs texts dealing with end times, a common theme in Christian church services during Advent and the weeks leading up to it. The December 6 Ronen program balances this idea of vigilance with the first half of music dealing with night and rest, whether literal or metaphorical. For example, Vaughan Williams's great song-cycle On Wenlock Edge demonstrates the preoccupation with mortality and the passage of time that became increasingly relevant to the generation of young Englishmen that would fight in the Great War.

Martin: Dover Beach is a setting of Matthew Arnold's famous poem, a work that has been so influential that it is cited everywhere from books and movies to the Supreme Court – in a 1982 case, Justice Rehnquist alluded to the end of the poem: "And we are here as on a darkling plain/Swept with confused alarms of struggle and flight,/Where ignorant armies clash by night."

When I first started writing it, I had no idea that Samuel Barber had also set this poetry accompanied by a string quartet, nor had I actually seen the famous white cliffs. A few years later, having finished up my time living in England, they were the last thing I saw as the ferry crossed the English Channel towards Calais – I remember that trip very well. Musically, it's in a kind of sonata form, though rather than being founded on the opposition of key areas, the interplay is between a modal, chordal idea and a more tonal, contrapuntal one. Given this approach, the piece isn't really developmental in a traditional sense but combinatorial in terms of small melodic ideas being placed side by side and stacked on top of one another while always retaining their original identity. The attempt to portray a kind of slow vanishing at the end is a musical summary of the idea I felt to be at the heart of Arnold's verse: "now I only hear/Its melancholy, long, withdrawing roar,/Retreating to the breath/Of the night-wind."

Kohn: Our Lady Of Lourdes Catholic Church has been part of the Irvington community for well over a century. When we attend the December 6 program, what particularly should we know about:

The church and community relations and aspects about the architecture, etc of Our Lady of Lourdes, are especially of interest.

Martin: As you say, Our Lady of Lourdes has been a key part of the Irvington community for over a century, and that role continues in lots of ways, from the annual Fall Fest to its offering of a sort of neighborhood school. One of the things that really seems to stand out to me is the parish's role in providing food to the hungry in the area, whether it be Thanksgiving and Christmas meals, or the Spooky Organ Concert that kicks off the Irvington Halloween Festival, and which routinely brings in hundreds of dollars and food items for a local food bank.

It's a beautiful building, an almost Gothic stone structure with lots of wood installations and pieces inside. The stained glass can also have an extraordinary effect – there have been times when I've been alone in the church in the afternoon, and the entire sanctuary seems to be bathed in an almost otherworldly blue light.

Kohn: Anything else we all need to know?

Martin: This concert is a little different from the usual Ronen fare in that it features vocalists on every number. In addition to local artists Shannon Beckemeyer (soprano), Mitzi Westra (mezzo-soprano), and Mark Gilgallon (bass), George Revill, a Virginia-based tenor, will be performing with us. And the final chorale of Bach's great cantata will be a singalong, in which the audience will be invited to join the performers. It should be a rousing ending to the concert!

Dr. Gregory Martin is a member of the piano faculty of the University of Indianapolis Department of Music. In 2014 he was named co-artistic director of the Ronen Chamber Ensemble, joining with founders David and Ingrid Fischer-Bellman.

Part of his biography reads, "Applauded in London by the Sunday Times for performances of "great panache," pianist Gregory Martin's playing has been called "filled with imagination, fire, and lyricism...a virtuoso performance" and praised for its "mature and subtle understanding, all the while handling formidable technical difficulties with ease and fluency." Martin has been featured throughout the United States, Europe, and Japan as both a soloist and chamber musician. He holds DM and MM degrees in piano performance from Indiana University, Bloomington, and a BM from the University of Cincinnati College-Conservatory of Music; additional post-graduate work was conducted at the University of Oxford (Worcester College), focused on the intersection of language, music, and national identity in 20th-century England.

An evening of all-new originals by nationally celebrated pianist and composer Steve Allee and his big band:

This presentation represents one of two projects that make up the Indy Jazz Fest 2021 Commission Series.

For more information about Indy Jazz Fest, visit their website.

A multimedia piece including a film by Mike Halerz

December 19: On the Sunday before Christmas, since 1976, a Luminaria is brought to life by Irvington residents who line their streets with thousands of candles. Enjoy your self-guided walking tour started by Rose Mary Clark and Patty Hawkins, who began the event "as a simple little thing — put a candle in a sack with four cups of sand."

So let us revel in our National Park’s being overrated. It keeps us real.