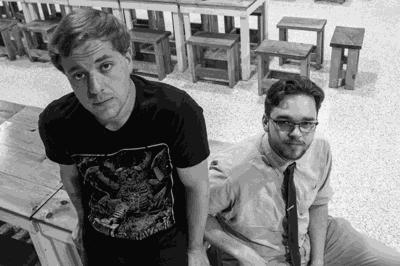 Putting music out into the world is not cheap. Oftentimes, the artists responsible are nowhere near wealthy, either.

First, there’s buying the gear, and then there’s getting the proper lessons and training required, assuming you need it. Once you do find that perfect group of pals to start writing songs with, there’s never a guarantee on where you’ll practice. (Not everyone likes the sound of crashing cymbals, after all). Then, finally, once an album of material is ready, there comes the studio costs.

Richard Anderson III and Aaron Hogan know all about the barriers to entry when it comes to being a musician. For this reason, the duo is bringing Soundspace to Indy’s Circle City Industrial Complex this fall.

Created with the intent of bringing more Indianapolis musicians together under one roof, Soundspace will exist as a co-working facility for musicians. For an affordable monthly rate, Soundspace will offer musicians 24/7 access to practice facilities, rehearsal spaces, recording studios, and learning resources, while also giving them a chance to cross paths and share ideas with other Indianapolis artists in one central music hub.

“We’re thinking big, and we’re really trying to impact a positive change for local musicians,” says Hogan, Soundspace co-founder and COO. “The best way we think we can do that is to help bridge the gap financially. Soundspace is an infrastructure for that gap to be bridged.”

While the cost of rehearsal and studio spaces vary, Soundspace made sure to put in their research when it comes to Indy-specific data. Through their findings, an average listed hourly rate for recording in Indianapolis is $67 an hour, and an average listed hourly rate for rehearsing in Indianapolis is $29 an hour. To put this into perspective, Rolling Stone reported in 2018 that the median U.S. musician is still making under $25,000 a year.

Although exact specifics on logistics are still being sorted out, Hogan has a tentative idea of what musicians can expect to find in Soundspace.

“To quantify it, I’d say [there will be] 15 to 25 bookable spaces,” says Hogan, who has also been a musician of 30 years. “That’s two recording studios, rehearsal spaces, learning rooms, and meeting rooms. We’ll even provide spaces to come and have a phone conference with a potential manager or something, if that’s what your band needs to do.

“The equipment and facilities themselves will be full-service in each rehearsal room. There will be a recording-enabled PA in every room with proper monitoring, microphones supplied, and even backline instruments, should you need them.”

Raising the Volume on Local Music

In anticipation of their fall opening, Soundspace has begun assembling a crew of artist reps to help get the word out about what's coming. To this point, the list of representatives includes Indy artists like rapper Sirius Blvck, drummer Richard “Sleepy” Floyd (Native Sun), and vocalist Kenton Caldwell (Kiddo).

“I like the idea of artists being able to get projects done and recording done for a cheaper rate, and being able to have unlimited access to a space like that for a monthly fee,” Blvck says.

With so many artists coming in and out of one physical location, drummer/producer Dan Giffin foresees Soundspace serving as a springboard for local collaboration as well.

“I think it’ll be interesting to open up new opportunities for relationships and collaborations between artists and musicians of different backgrounds,” says Giffin, another Soundspace artist rep who makes music under the name Philia.

With Soundspace being such an artist-centric endeavor, its founders have made sure they’re having a constant conversation with the local community, in an effort to gauge what’s actually needed.

“What we started with a long time ago was public focus groups,” says Soundspace CEO and co-founder Anderson III. “We invited as many people in the industry as we could and just asked them some simple questions. Now, we still actively run focus groups on a regular basis to try and figure out if we’re on the right path.”

This community-minded approach is something that also grabbed the attention of Sirius Blvck.

“It seemed artist-oriented first and foremost, and that’s one thing that sparked my interest,” Blvck says. "It seemed like there was a big focus on making sure artists were taken care of, and I thought that was cool.”

Going forward, the Soundspace staff encourages local artists to reach out to them with input (find their contact info here). Between now and the space’s opening later this year, interested artists are also encouraged to pre-register for a membership.

“The best way to support what we’re doing and help out is by preregistering for a membership, just to show us that you’re interested,” Anderson III says.

To keep up with Soundspace’s progress, be sure to check their website regularly, while also finding them on social media under the name @sndspc.

Discussing the Musical Legacy of Indiana Avenue with David Williams

Founded in 2010, VOICES works to change the narrative of Indy’s most vulnerable youth and families.