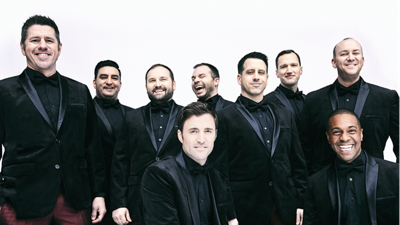 While they may have started out in Bloomington, Indianapolis still holds a special place in the hearts of much-loved a cappella group Straight No Chaser.

“We started in Bloomington, but Indy is not too far away,” says Straight No Chaser member Tyler Trepp. “It’s always kind of been a second home for us as far as where the group’s origins are. We’ve been doing multiple shows there for as long as I can remember. It’s always packed to the brim and always a really fun crowd.”

After a year away due to the COVID-19 pandemic, Straight No Chaser will return to the Murat Theatre at Old National Centre in 2021 for their traditional slate of holiday performances, treating Indianapolis fans to four shows in all across Saturday, Dec. 18 and Sunday, Dec. 19. In light of their triumphant return to the Circle City, our Seth Johnson caught up with Straight No Chaser member Tyler Trepp for an interview, discussing the group’s 2020 album, their Bloomington origins, and much more. Read their conversation below.

SETH JOHNSON: Take me back to when you first joined Straight No Chaser. What was the group like at that time?

TYLER TREPP: I’m one of the non-original members of the group so I joined the group in April 2009. The professional group had already been signed for a year then. When they were slowly discovering that this could actually be a full-time job, a couple of the original guys had to back out. They had already started families and had other jobs going.

That’s when they asked Seggie Isho and me to join the group in 2009. So it was still kind of a new thing. We had just booked our first big tour — I think it went through 50 cities or something. We had just recorded our second album that year. So that’s where the professional group was right when I joined.

JOHNSON: Where are you originally from?

There are five original members that started this thing back at Indiana from 1996 to 1999. The original plan was to leave the group at IU and audition new members as they came in. So there are four non-original members, myself included, that came through the group after those guys had left. And then, this professional group started in 2008/2009. There’s still a college group there [at IU] to this day. It just goes by a different name [Another Round].

So there are five original guys and four non-original guys, but we all went to Indiana and we all were in the a cappella group, which, at that time, was called Straight No Chaser.

JOHNSON: What pleasant memories do you have of being in Bloomington?

TREPP: The best memories. Like I said, this group had already started before I went to college. But I knew about them, so I joined the group on day one of stepping onto Bloomington’s campus. I had the best time through four years singing with these guys and, in my opinion, being on the most beautiful campus in the world in Bloomington. It was a great time. I met a lot of cool people. I made a lot of friends and a lot of great memories during those four years at IU.

JOHNSON: Having those Indiana roots, what did it mean when Straight No Chaser was asked to sing “(Back Home Again in) Indiana” at the Indianapolis 500 in 2015?

TREPP: Oh, it was a really huge deal. We all knew about the Indy 500, of course, because in Bloomington we had the Little 500 bike race. The guys who grew up in Indiana obviously knew about it and had been watching it their whole lives. Even though I’m from Iowa, I knew about it too. My dad was a big fan of watching the race growing up. So when we got the opportunity to sing “(Back Home Again in) Indiana,” that was a huge deal, and we had an awesome time doing it. It was just an experience that you’ll never forget.

JOHNSON: What impact did the pandemic have on Straight No Chaser, and what was the group still able to accomplish during that downtime?

TREPP: With us being known for doing a lot of live, in-person shows, it affected us greatly and took our whole business to a halt. We were forced to think a little bit outside the box and think of different ways that we could still bring our music to people.

One of those ways was we recorded an entire album from our own homes, in our own offices, bedrooms, or wherever we had our recording setups. With the power of technology, everyone just recorded it to their computer, and we sent it out to be mixed, mastered, and all that. So we were able to complete a whole album solely from home. It was called Social Christmasing, and it came out last year.

We also did a couple of what we call, “Reclusive Exclusives,” where we kind of did the same thing and recorded from home but with video as well. We sang a bunch of songs that we were familiar with and the fans were familiar with. [We did that] just so the fans could still see our faces and hear our music throughout that season.

JOHNSON: While Straight No Chaser covers plenty of Christmas favorites, you guys also write some of your own original holiday tunes. What all goes into writing those new songs, especially considering the fact that there’s already this “canon” of Christmas songs that people know and love?

TREPP: It’s kind of like writing an original song in general. But, of course, in the Christmas genre of music you have all those classics that you’re in competition with, so it’s definitely a challenge.

One of our guys in the group, Mike Luginbill, for these last few albums, and he’s done a great job doing that. It’s just one of those things where you know what your competition is in those other classics, and you try to make it just as good.