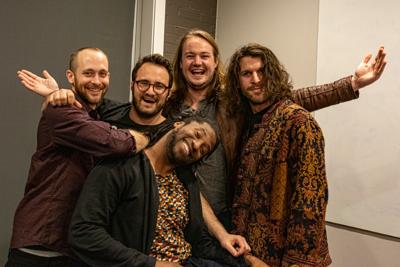 Audience members will play a huge part in determining who will take home grand prize at the 2019-20 Hi-Fi Battle of the Bands, sponsored by MOKB. It has been the biggest Battle ever hosted in Indiana, with 72 first-round participants. Only local talent from Indiana was showcased, making that number even more impressive. The competition began on October 2, 2019 and will come to its conclusion February 15, 2020.The winners will be rewarded with a grand prize of a touring van, a round of vinyl pressings, and $10,000.

Final ranking will be determined by a combination of judges' votes and audience votes. Each audience member will vote for three bands, and the outcome of those votes will make up 62.5% of the final scores. My goal with this series of articles is to give you a chance to get to know each of these eight finalist bands a little better before the finale at the Vogue.

The members of The Palace have been connected as far back as 2010. But the band they are today started in 2016. Initially James Knott and Ben Marcus became connected and were working small gigs as an instrumental duo. At the time, Ben was working at a restaurant called Chef Joseph’s, where he heard Ray Hutchins for the first time.

Ray was performing at an open mic that was part of a memorial service for his mentor Bill (Billy) Eckhart. Billy had worked at the restaurant and was a mutual friend of Ray and Ben. After seeing Ray perform, Ben reached out to him about playing with Ben and James for their upcoming gig.

They all knew when they started practicing together that it would be a very temporary thing. A few more shows were scheduled for that summer, and then James and Ben would both be going their separate ways. James was returning to England. Ben was going to Spain to teach English. And Ray was about to start an acting course.

Ray said he knew from that first practice that this was not something he wanted to let go.

“It was a good practice. We were feeling good. When we finished playing, I just remember we gave each other this weird almost seductive look. And after about 20 seconds we were finally able to talk, I remember thinking, man we are really about to end this. We have to end this.”

The members were separated for two years after that. They all were still making music independently, but it wasn’t their primary focus.

Ben was the first one to come back. And then James came back, as well. They were getting a decent amount of shows through the Indy Convergence that first summer and had a big show coming up. The band felt like they really needed a drummer for the show, which is when Ray mentioned bringing in Cameron “Cam” Helm.

Ray and Cam had played together in a band called Vibrations and Chemicals back in 2010. Cam had mostly given up music after the band was dissolved and was pursuing his cinematography career.

In Vibrations and Chemicals, Cam was the lead singer, as well as the drummer, and Ray played cello. Cam didn’t know how talented of a singer Ray was until after the fact.

“The more I heard him sing, the more I was just like, man this dude is really good.”

Cam was hesitant to get into another band. He did not want to fall into another group that wasn't actually going to pursue music in a serious way. So the deal with Ray was that if Cam was going to join the band, they were going to go all in.

The band has a habit of bringing in new members right before a big show. Cam described the whole exchange pretty dramatically.

“When Ray offered me a hundred to play for them even as a fill-in, I was like yea, okay, sure. When is the show? A week. How many songs go I have to learn? Twelve. Okay, and when is practice? Tomorrow. Alright then.”

Which brings us to the final addition, Bill Eckhart. Ben and Bill have known each other since kindergarten and grew up together. Bill started hanging out with the group. He was excited about the work the band was doing and wanted to be a part of it.

So Bill reached out to Ben: “Hey I know you guys are pretty full up on guitar players. But I have been playing piano since I was a kid and I could play keys for you guys if you wanted.”

The name The Palace got its origins from a house that the members lived in that became known as The Palace. This house was described as a “shitty house” that turned into a hub for the band and their group of friends.

James described it as: “We created our own little scene within the music scene of Indianapolis. Of people that we liked to hang out with and who liked our music.”

Everyone would come together and hang out, and it was fun and lighthearted and felt like family. That is the feeling the band members wanted to carry forward, so using The Palace seemed fitting.

This energy and vibe is what Ray credits with connecting him so quickly to the group. The similarities it shared with what he experienced with his mentor Billy made it a nostalgic feeling for Ray being at The Palace.

“It was exactly like would happen with my mentor Billy. We would go to Billy’s house at the Copeland Manor. And we would smoke and drink and go up to his attic and see all these old play costumes. And it was just a great time. I think that is why I became so addicted to y’all (James and Ben), because it was the same type of thing.”

The term Pals was what they used to describe the group of friends that started at the original palace. When they were all living there, a friend named Shelby would get very drunk and start calling everyone “pal.” And from there it became a running joke that they would tease her with, which eventually turned into everyone becoming pal, and then as a group “the pals.”

“The pals” has evolved into something even bigger now and is the endearing term that the band uses to describe their fan base.

“We are basically trying to create a cult called The Pals,” James joked when explaining the evolution of the term.

Pals just want to have fun

The band does not really feel like they fit in with any one genre. Even within the members they all have a different view on what the band is, which is something they enjoy. The go-to that they use to describe the band is genre-bending soul rock.

Each member of the band brings a unique twist into the sound they create.

From Cam we get blues and funk. Ray brings in soul and gospel. James pulls in classical guitar and in general is very guitar driven. Ben is the resident lyricist, especially when the lyrics are able to be sensitive in a genuine way. Bill leans towards the heavier side of things, with influences from hard rock and punk.

All of this collectively creates the blended sound of The Palace.

The Palace is still exploring their writing process. But a song generally starts from a jam session. Or with a member bringing in lyrics, chords, or even a whole song. In the case that someone brings something to the group, they usually will work on it, building on it, and ending up with something that is totally fleshed out and probably very different than what they started with.

“You will know it's us every time,” James said, “but the style of the songs will be slightly different.

The band’s philosophy with their music and their shows is to always enjoy it and always have fun.

“Being successful is obviously important, and being liked is part of that,” Ben said. “But really, hearing that we look like we are having fun is the best thing to hear. That is so much more important to us.”

The band has only two songs out on streaming sites currently. But they plan to add more in the next couple of months. The issue has been they are always adapting their songs after every show that they play. And they want to make sure that what they record is an accurate representation of what the song will be and what the band wants the song to sound like.

We asked the members about what their musical guilty pleasures were, or rather something they enjoy listening to that they don’t think people would expect.

Ben: “Edith Piaf, I am always listening to old French music in my house. But it’s something I would never put on if someone else was over.”

Ray: ”Mine is theme music from anime. Anime from Japan, if I really like the animation. I don't really like the genre, I am not looking to explore what K-pop has to offer. No. I like the third season of Naruto’s opening number. So I go to YouTube and I listen to it, and I find all these different versions of it, and it’s the shit.”

Life outside The Palace gates

Ray is still acting on a regular basis. He has used acting as a stepping stone to help him become stronger and more versatile in his singing career.

For James, music is his whole world. Outside of playing in The Palace, James teaches guitar full time. He teaches out of a suite located in the same building as Soundspace Studio.

For Ben, he said he might give us a different answer in the daylight, but music and the band are his priority.

Bill is a man who perhaps never sleeps. In his day job he is a lawyer. By night he is in The Palace and another band called Awake the Wild. He also has a kid and a set of twins on the way. But he assures the band it is okay because he never slept to begin with.

Cam is still doing cinematography. Cam has shifted more of his focus to the band, but he still works on making videos for clients. Cam’s son also is a big part of his life. Cam teaches the drumline at his son’s school.

We asked the band members to pick one living artist and one dead artist they would like to collaborate with. Let’s see if you can match them to their choices:

Another lofty goal Ray has for the band is to play on the space station. But in a more realistic sense, the band all agreed they would feel like they made it as a band if they were to play at the Grammys or at a sold-out stadium.

Final words from The Palace

To fans: “Thank you, lovely pals, for supporting us to get this far and continuing to support us.”

To potential fans: “We really are just a dynamic group that is out to make music and have fun while we do it. So if you like rock that can be soulful and impress the shit out of you with amazing vocal runs, then check us out.”

To the city: “I think it is so important what is happening in the music scene in Indy right now. Because the talent is here. The potential is here. So I think it will be important to see what happens with that when the support is there.”