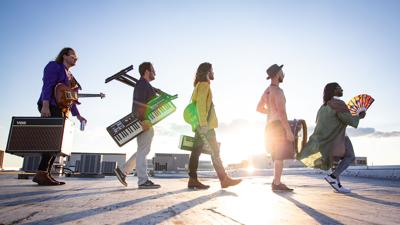 Indianapolis band The Palace didn’t have your typical “first show” experience. As a matter of fact, the reigning Battle of the Bands champions made their live debut at a now-defunct restaurant, playing for customers as they enjoyed their brunch.

“Ben had heard me sing there at an open mic, and he contacted me about singing there for a gig,” says vocalist Ray Hutchins. “I was like, ‘Yeah. I’ll help out for this one time,’ but like a good fuck, it became a lot more.”

Back on February 15, The Palace finished first in a large-scale Battle of the Bands competition that ended at the Vogue, winning $10,000 and a tour van. Now six months later, the rock/soul band will play in front of a live audience for the first time in exactly six months, headlining a show at Hi-Fi Annex with The Meridian City and Alex Franc.

Following their storied “brunch rock” show, The Palace began making big moves just a few months later. As Hutchins recalls, one big turning point occurred when the band got a chance to play on the Rickey Smiley Morning Show.

“The Rickey Smiley Morning Show was doing their radio karaoke thing, and you had to call in to let the band get a second chance after a 30-second go,” Hutchins says. “We ended up being on there for like 40 minutes.”

After taking some time off due to world travels, The Palace eventually picked things back up, playing several shows at Indy Convergence before landing a spot on one of the Hi-Fi’s New Faces Nights in January 2019.

“That’s when I was like, ‘Whoa, alright,’” says lead guitarist James Knott of the band’s 2018 New Faces Night performance.

Fast forward to the Battle of the Bands competition, where The Palace beat out several of Indy’s best. In addition to the obvious perks of winning, The Palace says they also cherished meeting other topnotch local acts through the process.

“I didn’t know all the bands that I would’ve liked to know before then,” Hutchins says. “During that, the ignorance I had about Indianapolis not having much to offer was shattered.”

After winning the Battle of the Bands competition, The Palace went into the studio to record an EP with some of their cash prize. Unfortunately, these plans were quickly kiboshed by the COVID-19 pandemic.

“We were planning to get in and record as much as possible with the money that we won,” Knott says. “That couldn’t happen because the studio we used had to close up. We managed to get one session in just as everything was closing down.”

On the horizon, the band hopes to get back in the studio to finish up the EP. In the last six months, however, they admit their sound has evolved.

“The band has strangely shifted sounds,” says rhythm guitarist Ben Marcus. “Being in a different [mental] state, as we all have been during this time, has pushed us to communicate in different ways as a band. It’s funny what we’ve ended up coming up with. There are things coming out of us songwriting-wise that would never have existed before. So it’s kind of like getting to see a new generation of The Palace.”

While the band hopes to eventually get back out on the road again once the pandemic has passed, The Palace is simply looking forward to getting back in front of fans for now.

“I think we’re kind of in a place where we want to do a show — we want to hang with everyone,” Marcus says. “We also have some new stuff we’ve been working on, but the vibe now is expanding outside of Indianapolis.”