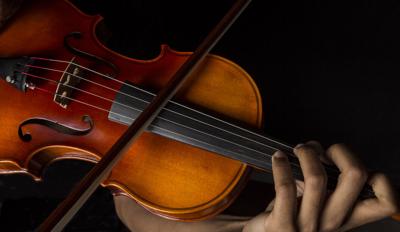 Time for Three (TF3) is a high energy group featuring Nick Kendall and Charles Yang on violin and Ranaan Meyer on double bass. “Together they blend several Western musical styles from Americana to modern pop, from classical to bluegrass,” said Zack French, International Violin Competition of Indianapolis (IVCI) director of communications and artist advancement. “Their unique blend of instrumentation and vocals have captivated Indianapolis audiences since their first appearance with the Indianapolis Symphony Orchestra.”

With TF3 in the spotlight, the International Violin Competition of Indianapolis will continue its 2020-2021 Laureate Series on April 8, at 7:30 p.m., with a new performance delivery format that includes an in-person performance at the Madam Walker Theatre, and an online option.

From 2009-2019, TF3 was the trio artist-in-residence with the Indianapolis Symphony Orchestra. Founded in 2003 with Curtis Institute students Nick Kendall and Zach DePue on violin and Ranaan Meyer on bass, Charles Yang joined in 2016 when DePue retired as a founding member.

I reached out to Zack French, Nick Kendall, Charles Yang and Ranaan Meyer for an email Q&A about the April 8, 2021 program:

RITA KOHN: What is the shape of the Time for Three program in relation to ‘the time' in which we now are living AND as part of the upended 2020-2021 season'?

ZACK FRENCH: While not related specifically to Time for Three, the IVCI has purposefully worked hard to produce this concert —  and our entire season — locally. So many concerts are being produced virtually from remote cities and in many cases, living rooms! We hope that this concert - and all the IVCI's concerts this season —  performed to a live audience  (albeit in a reduced capacity) will create a greater personal and meaningful connection to our audiences.

KOHN: How will this program specifically introduce the Walker Theatre venue and the dual format of live and streaming?

FRENCH: We are excited and privileged to perform at the Madam Walker Theatre, which is new to the IVCI. This magnificent venue (thanks to a $15+ million renovation) serves a dual benefit —   it is large enough (900 seats) to safely distance our reduced audiences, and its historical aspect within the Indianapolis community is extremely important to us.

KOHN: How will the at-home audience connect with program notes, and conjure the buzz we get from attending a live performance and mingling and sharing?

FRENCH: We are not alone in missing the thrill of a live audience, but due to these times, we have all had to make sacrifices. Now that the COVID numbers in Indiana have diminished slightly, we can begin to gradually refill our venues. For those who still wish to enjoy the performances at home, it is our hope that virtual patrons will vicariously experience the live concert thrill through them.

Plus, the live stream will be available until Sunday, April 18, so anyone missing the live feed (or simply wishing to watch it again) can easily catch it on their own time.

Our program books are all virtual this season and are available to everyone via our website a few days ahead of THE performance. Having a virtual program is advantageous, not only for the health aspect, but also because they will be interactive — patrons can delve deeper into various portions of the program to learn more about the artists, composers, IVCI sponsors, and the music in general.

We are playing the hand we have been dealt, and doing everything we can to bring a bit of joy to the community through our music.

KOHN: As an [almost] Indianapolis home-grown trio closing in on 17 years of making a different kind of music, how is 'international' impacting on the Time for Three brand?

NICK KENDALL: Time for Three identifies itself as an American band in the music we create and interpret. America as a nation is a melding of so many cultures, and our music reflects that. We feel we stand on the shoulders of tradition. The three of us have traveled all over the world and have immersed ourselves in the cultures of other nations, and not just musically. That has had a profound influence on us, and helps us appreciate the beauty of those cultures when we get home, and those experiences make their way back into our music. This is a very important aspect of Time for Three, and we can’t wait to get back to it after the pandemic.

KENDALL: One of the most important things we have to share is that we scored our first soundtrack to a feature film. It’s a movie called “Land” and is the directorial debut of actress Robin Wright, released by Focus Features. The movie premiered January 31, 2021, at the Sundance Film Festival, and was released in select theaters February 12. We collaborated with Louisville cellist Ben Sollee to co-write the score, and it was extremely gratifying to work on that project.

KOHN: What else is important to know about Kendall, Yang and Meyer individually and as a Trio?

KENDALL: We have been hunkering down and waiting this pandemic out like the rest of the world but in the meantime… Ranaan Meyer (New Jersey)  Ranaan’s two young sons are growing up so fast. They have been part of the Time for Three family since birth, and it’s been fun to watch them! Currently, they’re navigating in-school versus virtual school… something I’m sure most people are familiar with.

My wife Marina and I are EXTREMELY thrilled that we are expecting our first child this spring! A life changer, to say the least.  Charles Yang (New York) is working on his own musical projects at home.

Time for Three as a trio is doing great, continuing to make music as much as possible, and seeing what the future holds. We (and our families) are incredibly grateful to our longtime friend [IVCI Executive Director] Glen Kwok for bringing us to one of our favorite cities, and to a community, we’ve loved for so many years.