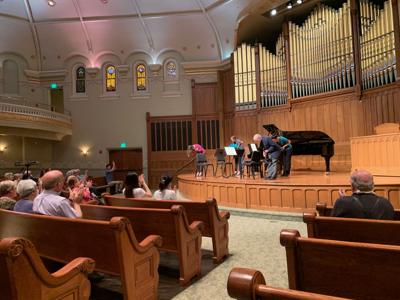 Applause met the on-stage pronouncement for the return of The Ronen Ensemble after the year and a half hiatus, particularly to pick up their silenced Beethoven 2020 birthday tribute.

The whispered reply from the audience member beside me put it in context: “It’s called ‘O come all ye faithful’.” Indeed, when I looked around, longtime faithful Ronen supporters made the effort to safely attend in the Grand Hall at Indiana Landmarks. Then, at the close of the evening, several reminded me: in your column mention ‘this is a perfect Ronen performance space.’ I heartily agree on several points: easy access, delightful ambiance, [mostly] acoustically fine. On this latter point, what matters is the blending of the piano with diverse wind and string instruments. [Hint-hint: Will a music graduate student find it worthy to undertake sleuthing sound engineering as a master’s thesis? ]

All this aside, what is likely to remain with me for a long time is the total aptness of opening this benchmark program with Jaques Ibert’s Cinq pièces en trio, [“Five Pieces for Trio”],” composed in 1935. Playing in perfect coherence with each other were oboist Jennifer Christen, clarinetist David Bellman, and bassoonist Ivy Ringel.

Parisian-born Ibert [1890-1962], composed these charming stand-alone yet thematically-linked short-takes in 1935. That year of coming out of the worldwide Great Depression has echoes for us now at this tentative coming-out of COVID-19.  The five pieces are from one to three minutes each and exhibit Ibert’s neo-classicist bent, composed mostly in classical form, while using modern harmonies that were then rising up, and now feel so comforting.

Forward from the clarinet’s opening feel of nighttime gliding into daybreak with the oboe’s response and the bassoon’s assertive voice, the sprightly glyph on march layers a melodic call and response with just a touch of melancholy as the clarinet carries us into its singer-ly upper register: “Allegro Vivo!”

Ah, but not so fast—the “Andantino” takes us into that up-and-down of ‘just five minutes more of sheet up-to-chin-shut-eye.’ It’s not to be—the bassoon is adamant—awake! It’s a playful minuet with the strident cuckoo musically throwing off the covers—“Allegro Aasai”—up—now!

Huge sigh, one last stretch before the urgent “Andante” —albeit with cheerful briskness—enjoins us to march into this newly awaiting day—“Allegro quasi marziale”— yet, one recognizes the ‘martial’ command as a bit loving, not quite coming off as a barked command.

Ibert, who composed in virtually every genre, deserves to be heard more often on our Indianapolis music platforms. The unity and charm of this work triggered a specific scenario for me. I’m open for anyone else to come forward with their conjured-up story.

This is a moment that I wish could have been captured for an online audience—I’d very much like to hear it again with Christen, Bellman, and Ringel pulling me from sequestering into up-and-about. Dual availability was not part of this concert’s plan. Ephemeral has set in once again.

Beethoven preceded Ibert by a century, and he too composed between what was and what was to become in music fashion. While on a piano tour of musical centers: Prague, Dresden, Leipzig, and Berlin, Beethoven composed the first two of his ultimately five sonatas for cello and piano—representing in retrospect each of his three major epochs as a composer.

Sonata in G minor for Cello and Piano, Op. 5, No. 2, was the second of two cello-piano pieces he created in 1796. Pianist Gregory Martin and cellist Ingrid Bellman embodied this totally charming work as a vision of unity and equality within art and society; citizen and ruler; city and countryside.  Beethoven represents “freelance” as an artist and ultimately as a composer when deafness took him off the stage and placed him wholly onto the page.  Pen, not the keyboard, became his metier.

But at this moment, in the company of Friedrich Wilhelm II, King of Prussia, he was a 26-year-old aspiring pianist-composer set on pleasing this cello-loving monarch.  Maybe it’s all those New Year’s PBS renditions of the ballet and orchestra traversing Vienna and environs that fueled my imagination and vividly took me outside the beautifully appointed Great Hall at Indiana Landmarks. But there I was, with Gregory Martin and Ingrid Bellman fueling the vehicle, wafting me across the Atlantic into the heart of a European palace and its grounds.

What starts out as a tete-e-tete between piano and cello becomes, for me, a fully implemented ballet with a corps amidst principals having a great time. In my mind’s eye, there’s endless space to conjure a story within compositional prompts. And so for 25-minutes, I was in the thrall of so much beauty of place and spirit.

It has been acknowledged that Beethoven initiated the genre of a sonata for cello and piano. In revisiting the pairing throughout his life, he shared something about which I keep plumbing why; what about this pairing was so enduring for him?

Also on this 1796 concert tour, Beethoven composed his Quintet in E-Flat Major for piano and winds. Gregory Martin returned to the stage along with Jennifer Christen, oboe; David Bellman, clarinet; Julie Beckel, horn; and Ivy Ringel, bassoon. Supposedly modeled on Mozart’s Quintet, it is reported as one of Beethoven’s personal favorites, that he placed it often on his own concert programs.

Watch for the announcement of the Ronen Ensemble 2021-22 season.