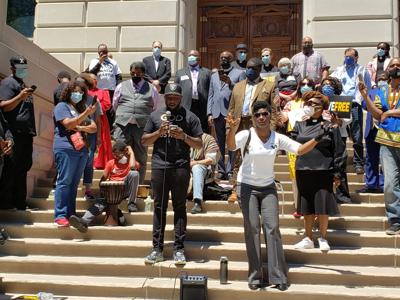 For the last several weeks, anyone living in downtown Indianapolis could hear chants of “Black lives matter” and “No justice, no peace” echoing throughout Monument Circle. Anyone walking downtown the morning of May 31 could see crews working to clean up glass and board up business windows after violence ensued the night before.

Some claim officers from the Indianapolis Metropolitan Police Department (IMPD) threw tear gas unprovoked, starting the chaos. IMPD officials claim violence and destruction of property gave them no option but to deploy tear gas canisters on the crowd.

Regardless of which side started the chaos, could it — and the last three weeks of demonstrations — have been avoided?

The recorded murder of George Floyd at the hands of Minneapolis police sent shockwaves throughout the country and the rest of the world. Indianapolis was no exception, with demonstrations popping up downtown, calling for the officers involved to be charged.

Beyond Floyd’s murder, however, Indianapolis was still reeling from the May 6 death of Dreasjon “Sean” Reed. Reed, 21, was shot and killed by an IMPD officer following a car chase recorded on Facebook Live. The demonstrations in memory of Floyd served a double purpose here in Indianapolis: call for justice for Floyd, and call for answers in Reed’s death.

Throughout the past few weeks, shouts of “Who killed Dreasjon Reed?” have been heard at demonstrations, and signs demanding answers from IMPD have been raised high in the air during protests.

Despite calls from the community, IMPD did not provide the name of the officer — citing safety concerns — for more than a month after Reed’s death. On June 10, Taylor confirmed four-year IMPD veteran Dejoure Mercer was the officer involved in Reed’s death.

On June 4, Rosemary Khoury was appointed as the special prosecutor on the case by the Marion County Supreme Court.

Outrage surrounding Reed’s death spiked again June 3, when his mother, Demetree Wynn, hosted a press conference near where her son was killed. Speaking candidly about seeing Reed’s body for the first time after his death, Wynn said “They couldn’t fix his face,” describing the damage done to Reed’s face alone. Further, Swaray Conteh, lead attorney for the family, said they have evidence that contradicts IMPD’s claims that Reed had a gun.

On June 5, community members gathered outside the northwest IMPD precinct to demand justice and answers.

“We’re here to do what we gotta do,” organizer Asia Giles said. “Hopefully, it will be peaceful.”

The demonstration at the precinct ended without conflict, despite not resulting in any answers from IMPD. A sit-in at the statehouse June 6 and a “Wake up for Black lives” event on the morning of June 7 also did not yield results.

However, Mat Davis of the Indiana Racial Justice Alliance believes the issues in Indianapolis go beyond Reed’s death.

“I think that there are many groups who are fighting for Dreasjon Reed, and that’s important,” Davis said. “The Indiana Racial Justice Alliance is made up of several groups, and what we’re fighting for is systemic changes that need to be addressed for IMPD as an entire institution that affects every aspect of our city.”

Whether or not they refer to it as “systemic racism,” many demonstrators have felt the same way.

“This is about more than George Floyd or Sean [Reed],” one protester, who declined to be named, said on May 30. “This goes deep.”

At the statehouse sit-in, one protest sign getting a lot of attention referenced Mayor Joe Hogsett’s June 4 announcement of the demolition of a Confederate monument in Garfield Park.

“Removing one Confederate monument?” the sign read. “Is that all you got?”

Local activist Cambria York said this is a distraction from the real issue.

“I am in general very disappointed by attempts made by Joe Hogsett to placate his community,” York said. “The removal of a Confederate monument in Garfield Park, while long overdue, is not what we were asking for. … It ultimately hurts everyone if we allow ourselves to get distracted by this fluff.”

In response to what he plans to do to further address systemic racism in Indianapolis, Hogsett said he wants to continue to push Project Indy and Indy Achieves, programs helping with job placement and education, respectively. Both programs are race neutral.

Perhaps the biggest step forward in addressing systemic racism in the city was a special resolution, Proposal 182, presented to the city-county council June 8. City-county council President Vop Osili was one of the sponsors of the proposal, which passed unanimously and declares racism a public health crisis in Marion County.

The proposal described racism as a “barrier to health equity” throughout the country, citing inequities in employment, housing, health care and food access, as well as links between school funding and tax revenue that historically put children of color at a disadvantage in education.

Dr. Virginia Caine, director of the Marion County Public Health Department, said one in four Black children have been exposed to violence and called this proposal a first step in addressing the issues systemic racism causes in Indianapolis. She urged the council to come back with concrete recommendations to help the issue, comparing the proposal to prescribing aspirin for a brain tumor.

Osili is optimistic this proposal will allow the city to undo past injustices through examining data from all city and county departments.

“We don’t like to talk about things that are uncomfortable,” Osili said. “But, the needle won’t move unless we have those uncomfortable discussions and make changes that reverse, as much as possible, negative impacts of decisions we’ve made historically.”