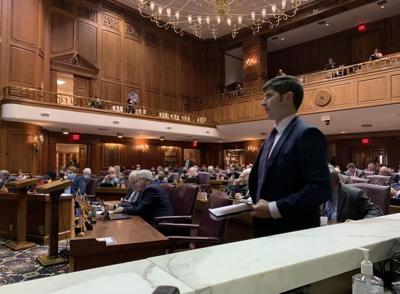 Under a bill now headed to the full Senate, Hoosiers would have another restriction on their ability to vote by mail.

House Bill 1116 would require voters requesting a mail-in absentee ballot to swear under penalty of perjury that they are unable to vote in person during the state’s early voting period.

Bill author Rep. Tim Wesco, R-Osceola, said the bill was an update to the state’s mail-in voting policy to keep up with the increase in the availability of early in-person voting.

“This really encourages people to vote in person with the state ID as much as possible by taking advantage of the 28-day early voting period,” Wesco said.

The bill passed the House 66-28. The multifaceted voting regulation bill’s main point of contention is that it would require Hoosiers requesting a ballot to confirm they will not be able to vote during the state’s early in-person voting period.

House Republicans and Democrats disagreed on the impact of the bill.

Rep. Sue Errington, D-Muncie, said the threat of being charged with perjury may lead working families to be unsure what box to check since they cannot be sure if they can make it to vote in person or not.

“With this bill in place, those who will be most affected are those who can’t check one of those boxes,” Errington said.

House Speaker Todd Huston, R-Fishers, said that it is no longer “Election Day,” in the state, it is “Election Month.” Because of this, Hoosiers should be able to find time to vote in their schedules.

House Democrats said the new restriction would make it more difficult to vote in a state with already low voter turnout. In the 2021 Civic Health Index, Indiana ranked 46th in the nation for voter turnout with just 61% of eligible voters in the state participating in the 2020 election.

Under current law, Hoosiers must meet specific requirements, such as being over age 65 or being out of town, in order to vote by mail. This bill would require Hoosiers to swear they are unable to make it during the in-person early voting period, either.

Rep. Tonya Pfaff, D-Terre Haute, cited that more than 60% of Hoosiers voted absentee either by mail or early in-person in 2020 when the state hit the highest rate of voter turnout in its history.

“At a time when Indiana’s voter turnout rate lags abysmally behind the rest of the country, we need to increase voting access, not make it more difficult to legally cast a ballot,” Pfaff said in a press release.

Errington also said the bill ignores that every county has a different early voting period and number of early voting locations, which could make early voting more difficult. Using Delaware County as an example, Errington said the county has just one site for early voting for over 114,0000 residents. Last fall, she said the polling site was moved, an issue that could prevent Hoosiers from voting when they need to appear physically.

The bill has other provisions, including requiring those requesting an absentee ballot to provide identification through a driver's license or Social Security number. It would also speed up the timeline for counties to provide a “voter-verifiable paper audit trail” to July 2024 from the original date in December 2029.

This isn’t the first time Indiana voting laws have been debated.

Due to the pandemic in 2020, midterm elections for the state were pushed back and all Hoosiers were able to vote by mail. Then, voting rights groups fought for the state to allow no-excuse absentee voting for the presidential election in November. The efforts failed, with the state continuing to require Hoosiers to check a reason when requesting an absentee ballot.

Bill author Rep. Tim Wesco, R-Osceola, approaches the podium to speak on House Bill 1116 at the Jan. 31 meeting of the House. The bill would require Hoosiers requesting mail-in absentee ballots to swear under penalty of perjury that they cannot make it to a polling site during the 28-day early voting period

Taylor Wooten is a reporter for TheStatehouseFile.com, a news website powered by Franklin College journalism students.