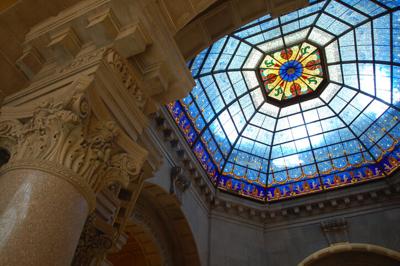 Those seeking positions in the U.S. Congress, state legislature and local offices began filing their candidacy for the May primary election with the Secretary of State’s office this week. Hundreds of candidates filed on Wednesday, the first day in the process.

Indiana’s District 46 Senate seat is up for grabs. The district, which was created in last year’s redistricting, extends south to the University of Indianapolis area and east past Warren Park. Four candidates have filed for the position thus far, all of them Democrats.

Ashley Eason is a bipartisan advocate for grassroots nonprofits in the Midwest. She is from Texas but has lived in Tennessee and Washington, D.C. Her platform centers around job creation.

Karia Lopez Owens is not a politician. She comes from a working-class immigrant family. The four tenets of her vision are community, affordability, sustainability and accessibility.

Andrea Hunley is the principal of an Indianapolis public school. Her priority is making sure education policy positively impacts local communities.

Kristin Jones is a city-county councilor, representing the council's 16th District. Her candidacy has been endorsed by several Midwest labor unions.

Secretary of State is one of a few state offices that won’t be on the primary ballot. Candidates for this position—along with the lieutenant governor, state auditor, state treasurer and attorney general—are decided at party conventions.

Destiny Wells (Democrat) is an attorney and combat veteran. She currently serves as deputy chair for coalitions and expansion for the Indiana Democratic Party but was previously Indiana’s deputy attorney general as well as a lawyer with the Associate Corporation Counsel for the City of Indianapolis and Marion County.

Wells grew up in Martinsville. She then attended Indiana University and graduated from the Texas School of Law.

Holli Sullivan (Republican) is the current secretary of state. Gov. Eric Holcomb appointed her to the position in March 2021 when Connie Lawson stepped down. The change happened while Sullivan was serving as district 78 representative (Evansville and Newburgh).

During her time in the legislature, Sullivan co-authored a 20-year infrastructure bill and served as president of the Bipartisan House Women’s Caucus.

Before politics, Sullivan worked as a supervisor in the General Motors paint division. She later founded Onward Consulting, a business consulting company in Evansville. She now lives in Evansville with her husband, Chad, and their three kids.

Kyle Conrad (Republican) is a lifelong Newton County resident with election and administrative expertise. He has worked for Governmental Business Systems, a company that facilitates the programming, testing, training and certification of voting systems.

Diego Morales (Republican) has served as an aide in the secretary of state’s office and the lieutenant governor’s office. He was also a senior advisor to former Vice President Mike Pence when he was Indiana’s governor.

Morales has an international focus. He got his bachelor's degree from Indiana University and a master’s from International Business Administration (NED) Tilburg University. A multilingual Hoosier, he is a native speaker of English and Spanish, also proficient in Portuguese, Italian, Hungarian and a Mayan dialect.

He served in the U.S. military on a base in Georgia and two bases in Indiana (Cass and Floyd counties). He received Indiana’s Sagamore of the Wabash award and was also named a Kentucky Colonel. Both distinctions are granted to honor significant public contributions.

Jeff Mauer (Libertarian) announced his candidacy in August 2021. He has worked in technology, transportation and finance.

Mauer is a Carmel resident and a member of the city’s Economic Development Commission and the Home Place Advisory Board. He pledges on his website that he’ll restore integrity and trust to voting and believes a smaller government to be more effective.

Mauer will vie for selection to be a candidate at the Indiana Libertarian Convention in March.