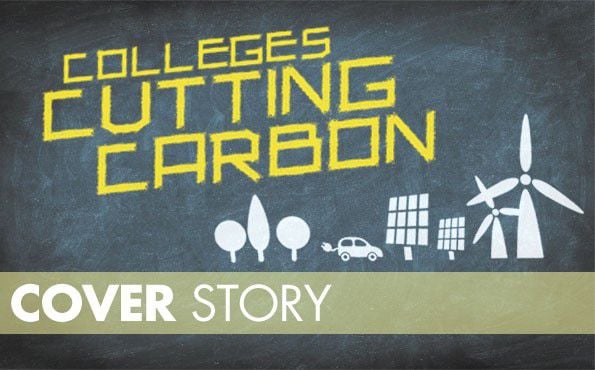 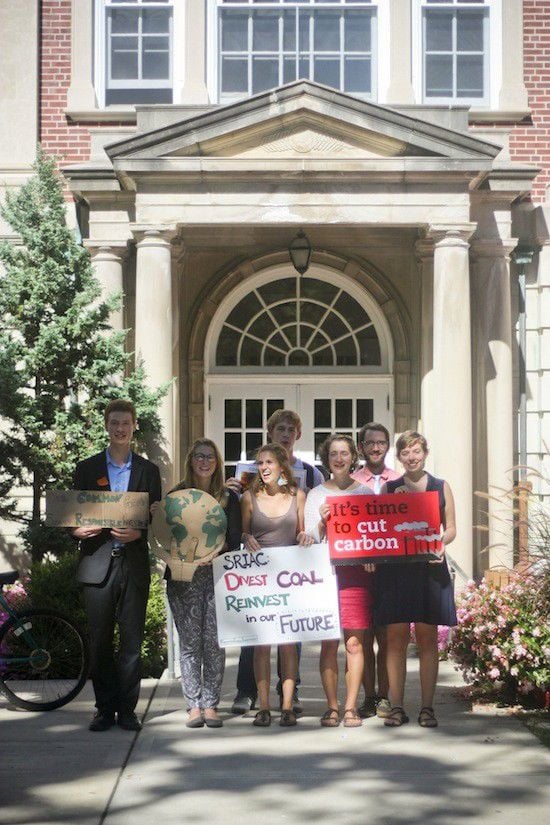 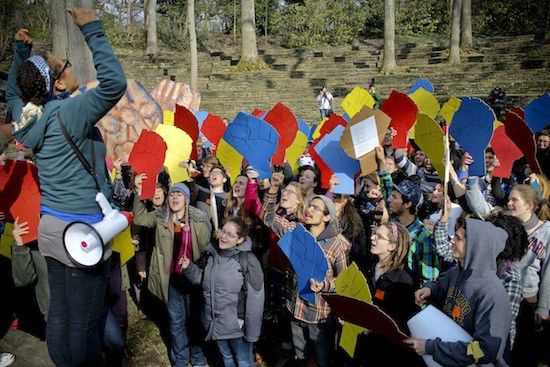 Students from 60 colleges in the U.S. and Canada gathered at Swathmore College to learn the ins and outs of divestment campaigns and plan for the future of the national campaign. 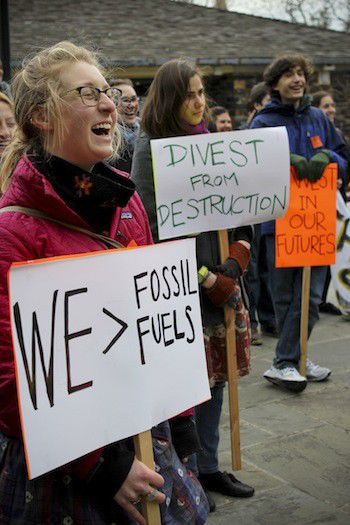 Anna Seifert from Earlham make her voice heard about divestment issues while attending a rally at Swathmore College.

Students from 60 colleges in the U.S. and Canada gathered at Swathmore College to learn the ins and outs of divestment campaigns and plan for the future of the national campaign.

Anna Seifert from Earlham make her voice heard about divestment issues while attending a rally at Swathmore College.

many college students, Vesta Davis had no idea, in

, what she was getting herself into.

began at Earlham, the goal was to convince the administration to

rid the campus of endowment investments in coal extraction companies. At that

point, Davis didn't know much about the coal industry, let alone how successful

the campaign would be.

two years later, Davis is in the critical stages of a movement to save her

college, to save her community and to save the world. Davis, along with her

many student colleagues, is a leader in Earlham's coal divestment

(local) communities are put in against their will. It's not just coal that is

violating these communities (in Indiana), it's (communities) all over the

corporations," she said. "Environmental Studies wasn't what I was

planning to pursue when I came to college. Over the last few years, there have

decision. The more I got involved, I realized not only how (fossil fuel

extraction) affects the physical world, but how it violates human rights."

after spending a summer interning for the Environmental

and preparing for another year on the climate change

battlefront at Earlham, Davis continues to work to get her college to commit to

divesting from coal, and hopefully, exploring fossil fuel divestment in the

Davis is not alone, the grassroots fossil-free divestment movement is spreading

ideal-changing virus — thanks to Indiana students. For some campuses,

this virus hit before350.org and

Tour. For others, the Do The Math Tour was all the students needed to encourage petitions, rallies, forums and

A voice for the

Earlham-graduate-turned-sustainability-coordinator Sarah Waddle has seen the

movement bloom at Earlham. Now as an employee, it's her job to make sure the

college is doing all it can to become sustainable, and that includes working

Earlham, being a Quaker institution, is governed by

committee, encouraging students, faculty and administrators to take part in the

decision making for the college. The Socially Responsible Investing Advisory

Committee (SRIAC) is tasked to evaluate the social responsibility of the

intent "to minimize investing in the securities of companies whose

denigrates the dignity of individuals."

SRIAC dictates Waddle's job duties, and it also holds her and the campus'

variety of things. The more that students can show the administration that they

works as an organization — the politics of running a college — the

more they can show they have a really clear grasp on this, the more seriously

the college is going to take them," Waddle said.

the college is taking the REInvestment campaign

college plans to divest it's endowment, but I think what we can say is that the

dialog between the students and the Socially Responsible Investing Advisory

really excellent moves being taken by the college in the coming year,"

is an enormous hurdle for most divestment campaigns at other universities, but

for the Earlham divestment movement, transparency is not an issue. However,

that doesn't mean the battle has been won. There is still a lot of work to be

done and Davis only has two years left to make significant achievements.

The next goal for the REInvestment

campaign? To get the administration to set a divestment deadline, then

take the campaign to the next level.

responsible investment organization As You Sow cites the following

disadvantages of investing in coal in its 2012 report "Financial

Risks of Investments in Coal"

¥ Capital expenditures for environmental compliance and

uncertainty about the cost implications of pending and anticipated

Competition from low prices of natural gas and other energy sources, which is

Improved profitability and policy preferences for solar, wind, and energy

The slow pace of development of viable commercial

knows there are options for reinvestment, but now she needs to make the

university understand that stable and sustainable clean energy options will

next big goal has always been to divest from coal extraction companies, but

overall I think fossil fuels is something we'd like to look into. Our official

putting together reports for the administration on social injustices due to

coal extraction to education on campus, Earlham is making strides to create a

said it can be easier for grassroots

about God, creation, care and earth justice, (divestment) really should be part

of their mission. Those are the colleges that hold the most hope. Once one

college in Indiana becomes the first to do this then there is pressure," Bensman said.

travels to colleges and universities around Indiana talking to students about

earth justice, sustainability and activism. He said the education of young

door onto campuses is through faculty members. I'm encouraging students that

change, now is the time to go for it and be as courageous as you can be,"

in Greencastle waits for the fall semester to start. It is an

Vaughn is waiting for a response from the administration. Will they invest in

portfolio and wait for another school to be the first in Indiana to divest?

Earlham's campaign predates Bill McKibben's "Do The Math," the movement at

DePauw was spurred by this countrywide initiative.

started a petition in December of 2012; by April Divest DePauw had 600

DePauw's request is for the administration to immediately freeze any new

investment in fossil-fuel companies, and to divest within five years from

said while the administration has been open to the discussion, transparency of

the endowment and public perception is the biggest issue.

are not very big and we are private, but we do have quite a bit of money,"

she said. "I'm hoping we can be a role model for other schools and that

the administration just wants other people to step up before they do. Five

like many other divestment activists, said divestment is not about students

giving the administration a new portfolio proposal. She said it's not about the

marketing plug that the campus has "gone green." She said it's about

social justice and righting the wrongs done to communities surrounded by

need to see this not as a movement about money. It's not about fighting the

administration. It's about fighting the fossil fuel industries and making them

the enemy and not the administration," Vaughn said. "People need to

realize this is against the fossil fuel industry. When you dive into it, you

can lose track of who the enemy is."

divestment campaigns can be a huge challenge for

students because many expect they need to be an expert on finance, investments

said that's not the case. Simply having a strong, loud voice and the passion to

hold people accountable for their actions is enough.

the actual question. More of these investment managers are paid more than

$100,000 a year and their job is to understand the investments. We can't expect

investment portfolio. But what we do know is that collectively as people on

fuel industry as it stands," he said.

travels around the Midwest speaking with students and educating about 350.org's integral mission: encouraging

largest carbon reserves, that can include coal, natural gas, tar sands oil and

activism has a long history when it comes to college students, Ho explained,

not only because as young people they have the most at stake.

a long history behind the grassroots activism spawned from small, dingy dorm

rooms on college campuses. When it comes to divestment, these young college

kids have a lot at stake. Their entire future is at stake.

telling us — there is not much time left," Ho said. "Often

university in the country that has some sort of endowment. It's very scalable

Moving from the campus

the popularization of divestment through nationwide campaigns, the movement is

beginning to go beyond campus boundaries. The idea of divestment is spreading

of the summer of 2013, there were 17 cities that have committed to divesting

their holdings from fossil fuel companies including Seattle, Portland, Ore.,

the municipal level," Ho said. "There are also a growing number of

religious institutions pushing for divestment along with art museums and

whatnot. We are seeing the movement rapidly spread to all sectors of society."

the fossil fuel industry receives an enormous subsidy from the federal

government, which driving common misconceptions of its relative market

competitiveness with energy sources such as wind and solar.

the divestment movement aims to change the public discourse on energy, causing

the amount of reserves of fossil fuels that companies own," Ho said. "There's a carbon bubble that needs to be

popped. That is why we are really going after the fossil fuel industry —

and at the financial level."

How can I start my own movement?

inspired, huh? You want to make a difference and hopefully change the world?

Thanks to tips from Earlham student Vesta Davis and

DePauw student Carlie Vaughn, you can. The two

campaign leaders want you to ask yourself these following questions. Once you

have those questions honestly answered, you'll be ready to build a

"How To" guide for grassroots divestment

are you passionate about this?

much time do you want

to put into this?

kind of groups do you want

Where do you want to see your administration/government take this?

can you make the campaign unique to what your campus/city needs?

How do you get a change made in your institution? What is the chain of command? What do you know about those people in that chain? Answering those questions and understanding the way of thinking will help you plan and customize your campaign to be the most effective it can be.

Look for ways to spread the word

more the merrier, right? If that's the case, you will need to build your

following of activists. From rallies to forums and education to training, the

louder the voice of the group the more you will be heard, and taken seriously

lose focus during your campaign. Find your mission and stick with it. As DePauw

student Carlie Vaughn said, it can be easy to forget

who the real enemy is. Remember, divestment campaigns are up against the fossil

fuel companies, not the university president, not the city mayor.

ready to start your own movement? It doesn't take much to get a campaign off

the ground. Simply visit gofossilefree.org or wearethepowershift.org to start a petition in