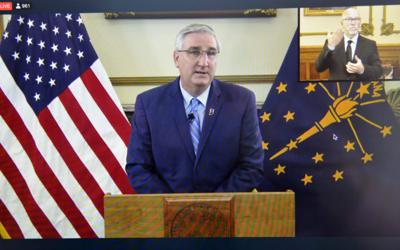 Gov. Eric Holcomb, in a formal statewide address, announced Tuesday that he is creating a new cabinet post to deal with racial disparity issues and will equip front-line state police with body cameras by the summer of 2021.

Those were two of a series of changes he said he will make in the coming weeks and months as his administration addresses what he described as equity and inclusion issues and provide Black and other minority Hoosiers with equal opportunity to life, liberty and the pursuit of happiness.

“I admit, I can’t put myself in a Black person’s shoes, can’t fully appreciate the everyday indignities and slights our friends and associates have had to deal with, let alone the fear of some things I’ve never had to think about,” Holcomb said.

During the address, Holcomb said that he spoke with Dr. Sean Huddleston, president of Martin University, Indiana’s only predominately Black institution, about how barriers to success need to be removed so everyone can benefit and achieve their dreams.

Body cameras will be phased into law enforcement, with every Indiana state trooper being equipped with one before the summer of 2021. Costs are estimated at $5 million initially, along with around $1.5 million annually for maintenance and upkeep.

Along with body cameras, Holcomb said a third-party will come in to review the state police and law enforcement academy curriculum and training. This is meant to not only inform state law enforcement but also help modernize the way officers are trained.

They will look at areas such as the use of force, de-escalation training and implicit bias training to help the state’s nearly 17,000 law enforcement officers on how to keep citizens safe while staying safe themselves. The one issue not addressed was banning the use of chokeholds like those that have led to the deaths of Blacks in police custody.

Holcomb said he will also work with the state’s new secretary of education, whom he will appoint, and other state leaders to help minorities in the education and training sectors. This includes using the $50 million from the Coronavirus Aid, Relief and Economic Security — CARES — Act for jobs and training programs.

To monitor the state’s progress, the Indiana Management Performance Hub will create the Public Disparity Data Portal, which will track and share data on various fronts that are important to transforming an individual’s life at every stage, Holcomb said.

Even though Holcomb’s state address was focused solely on equity and inclusion in Indiana, he never mentioned the Indiana Black Legislative Caucus, or IBLC, which has been working for months to promote changes in the state. Late last week the IBLC called for more reforms to the criminal justice system, including a more inclusive hate crime law.

The IBLC issued a statement after the address saying that they see a lot of similarities between Holcomb’s proposal and their justice reform policy agenda, and they look forward to working with him in executing the initiatives, including consulting about the new cabinet member.

“We know what needs to happen for our community, and it doesn’t end at body cams, revised training and another data portal,” IBLC said. “As mentioned by the governor, creating economic opportunities for minority communities in Indiana is vital and will go a long way for justice reform. When we see economic and educational opportunities are fair across the board, we will truly have equality.”

In response to Holcomb’s address, Dr. Woody Myers, Democratic candidate for governor, simply said, “Much too little, much too late.”

“The governor’s sudden policy rollout about ending systemic racism is welcoming, however, any hopes of substantial change should be met with cautious optimism, because throughout this whole summer, Gov. Holcomb has been largely silent and unwilling to even acknowledge the simple fact that Black Lives really do Matter,” Brown said.

The Indiana Chamber of Commerce said Holcomb’s plans represent a positive step forward for achieving true equity for Hoosiers who have experienced racism. The chamber has already endorsed Holcomb for the general election in November.

“The Indiana Chamber vows to continue to pursue policies and programs that will raise up the education level and prosperity of all Hoosiers – especially focusing on those who have been underserved and in greater need,” the Indiana Chamber said. “For our businesses and communities to succeed, all of our citizens need to have a pathway to thrive as well.”

In the governor’s address, Holcomb talked about COVID-19 and racism being two insatiable viruses that have ravaged the nation and the state, but they will not stop Hoosiers.

“Truly, like never before, we’re in this together,” Holcomb said. “And that’s why, ultimately, we will prevail — together.”

Hope Shrum is a reporter for TheStatehouseFile.com, a news website powered by Franklin College journalism students.