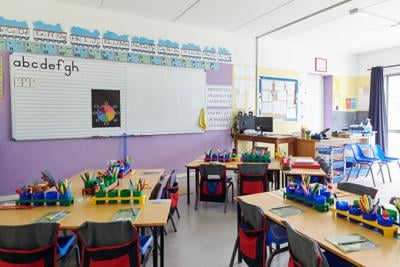 Indiana lawmakers are poised to approve a significant expansion of what is already a broad private school voucher program, setting one of the highest family income ceilings in the nation.

Nearly half of all Indiana families already meet the income criteria to be eligible for the program. Both the House and Senate budget proposals would open voucher access even further, in some cases to families earning over $100,000 per year for a family of four.

The plans would also eliminate partial vouchers, granting even middle-income families full scholarships — which average more than $5,800 per student.

For Republican politicians, who dominate state government in Indiana, the all-but-certain expansion represents a big win in advancing their free-market vision, where parents choose what is best for their child. At the same time, the legislature plans to broaden school choice, by creating education savings accounts that would provide stipends to pay for schooling and therapies for children with special needs.

A decade after Indiana created vouchers, the program served nearly 37,000 students at a price tag of close to $173 million last year. Enrollment plateaued in recent years, and widening eligibility for vouchers could spur a surge in participation.

Public funding for private education remains deeply polarizing. While Indiana’s voucher program initially targeted students from low-income families, the Republican expansion plans would offer generous aid to middle-income families. That amounts to a subsidy for affluent families, including some who likely would have enrolled their children in private schools without aid.

Critics say expanding vouchers for the middle class could potentially divert money that could be used to increase teacher pay and shore up public schools.

The staunchest supporters of vouchers see the expansion as one step closer to universal school choice. They argue that even middle-class families who can afford private tuition should have access to per-student funding equal to what the state gives to public schools.

“It’s taxpayer money that comes out of working Hoosiers’ paychecks,” said Betsy Wiley, president of the pro-voucher Institute for Quality Education. “Why should that only go to educate those that choose one type of school?”

However, the expansion could become “a windfall for upper-middle-class families that were already sending kids to private schools,” said Michael Petrilli, president of the Thomas B. Fordham Institute, a think tank that supports vouchers.

“That starts to raise some big questions,” he said.

The potential upside of providing vouchers to middle-class families is that it could push suburban school districts to improve to compete for students, Petrilli said.

Critics of school choice, including many school districts and teachers unions from around Indiana, have raised a drumbeat of opposition to the voucher increase. They argue that aid for private schools comes at the expense of the traditional public schools that educate about 88% of Indiana students.

In a year when Republican lawmakers largely ignored pleas to boost education funding in order to help districts increase chronically low teacher pay, it is especially frustrating to see a surge in spending on private education, said Keith Gambill, president of the Indiana State Teachers Association.

It is “completely irresponsible” for the state to dramatically increase aid for private schools at a time when the state’s economy has been roiled by the pandemic, Gambill said. “It is shortsighted to not invest to make sure that our public schools are the absolute best they can be.”

Research on the academic outcomes of vouchers is mixed. Recent studies, including one in Indiana, showed dips in some state test scores. Other research shows more positive results on long-term outcomes such as college enrollment. And voucher programs do seem to slightly improve test scores in competing public schools.

When Indiana lawmakers created the voucher program in 2011, it was one of the broadest in the nation. Instead of targeting a specific group, such as students in schools a state identifies as failing, or a single city, it was open to certain low-income families from around the state. Over the years, the state has broadened access, raised the income cap for some families, and made more families eligible.

In addition to meeting income limits, students must meet certain criteria to be eligible for vouchers. Lawmakers have made it easier by adding more ways for students to qualify. Now there are eight paths, including having a sibling who receives a voucher or previously attending a public school.

“Once you actually establish a choice program, people want it more,” said Robert Enlow, president of EdChoice, which supports vouchers. (EdChoice is a funder of Chalkbeat.)

Even as the state’s voucher program has become more generous and easier to access, other conservative states have adopted aggressive school choice plans. This year, West Virginia approved an education savings account program that will eventually make all families eligible for state aid for private school.

None of the Indiana proposals are that expansive. While the legislature hasn’t determined precisely how much more money it will put toward vouchers, both proposals on the table would likely make the income ceiling for Indiana’s voucher program among the highest — if not the highest — in the nation.

The more modest Senate proposal would allow certain families making up to 225% of the eligibility level for federally subsidized meals to access vouchers.

The House budget would go even further, raising the cap to 300% of the same eligibility level, about $145,000 per year for a family of four. That’s nearly double the Indiana median income for families, which is about $74,000 per year.

Kenny Roll, the administrator at Tabernacle Christian School in Martinsville, said that although the proposed income limits may seem high, some families need the aid.

Even some middle-class parents might have fixed expenses like student loans, Roll said. And the cost mounts for raising children — from sports and braces to college tuition.

The private school charges tuition of about $5,900 per year, and although that school provides aid, some families cannot afford it.

Before the state voucher program, some parents would send their first child to Tabernacle because they valued a religious education only to switch to public school once they had several children, Roll said.

“That’s where I think the voucher really has benefited us the most is the families, not necessarily with one but with two, three, and four children,” Roll said. “It adds up pretty quick.”