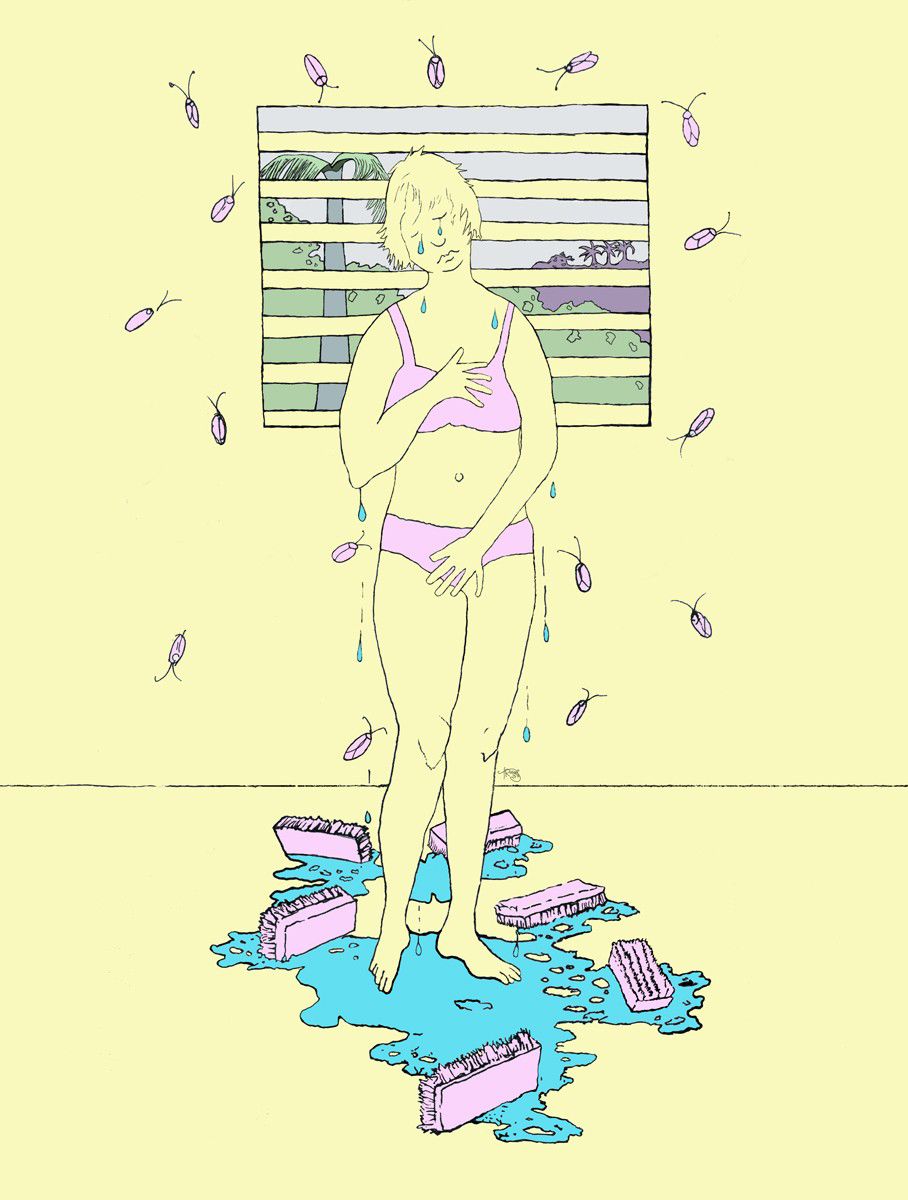 The image depicts a memory Theresa Rosado had of her time at Escuela Caribe, a reform school in the Dominican Republic run by New Horizons Youth Ministries in Marion, IN. A girl was stripped and scrubbed with harsh laundry brushes as leaders tried to force a confession of theft from her. The bathroom was filled with cockroaches who are keeping her company. The girl turned out to be innocent of the theft. 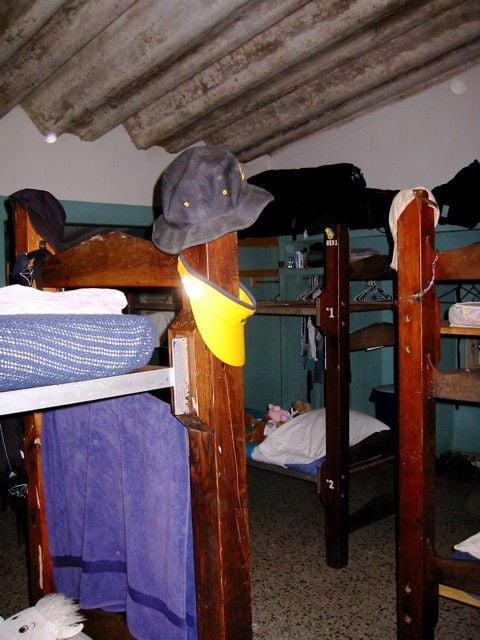 The living conditions at the schools in Haiti and the Dominican Republic were described as crude and punitive. 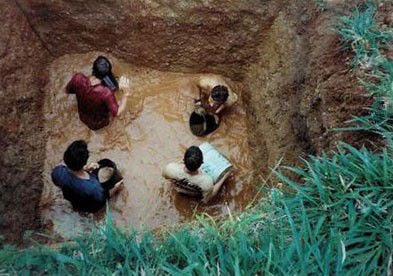 The image depicts a memory Theresa Rosado had of her time at Escuela Caribe, a reform school in the Dominican Republic run by New Horizons Youth Ministries in Marion, IN. A girl was stripped and scrubbed with harsh laundry brushes as leaders tried to force a confession of theft from her. The bathroom was filled with cockroaches who are keeping her company. The girl turned out to be innocent of the theft.

The living conditions at the schools in Haiti and the Dominican Republic were described as crude and punitive.

A document released by the Indiana Department of Child Services reveals that New Horizons Youth Ministry of Marion, Indiana had its license revoked as a licensed childcare facility in 2009. The revocation of the license came after the ministry repeatedly failed to comply with numerous state policies. During an inspection it was found that the ministry failed to have sex offender background checks on all of their staff and did not provide 24-hour wake supervision for the students they boarded. Some of the boarding school students had arrived with case records of sexual perpetration and self-harm. A December 2009 court document from an administrative hearing read, "DCS expressed disapproval of sleeping by adult supervisors at night when children have a history of sexual predatory behavior were housed in the same dormitory of children without a history of sexual abuse. DCS expressed concern that inadequate supervision placed the children at risk of harm."

It was a troubling scenario as it was revealed preceding the investigation that founder Rev. Gordon C. Blossom confessed to the practice of pedophilia. Prior to the facilities' loss of license, the daughter of founder Rev. Gordon Blossom released a book in 2005 called The Whisper: Some Secrets Shouldn't Be Kept. Shirley Jo Petersen, the founder of Healing Private Wounds, operates a sexual abuse treatment center in Cadillac, Michigan. Petersen disclosed her father's pedophilia and years of sexual assault she experienced in her home as a child. In 1991 using assumed names, she wrote, "Dr. Pluger diagnosed my father as a pedophile. Otherwise, he would have gone on to older gals or women who were prostitutes. He said he preferred the young ones." Peterson wrote in detail about the results of her father's therapy. "After spending hours with my father, he reinforced the need for continued long-term counseling for him. He also made us aware that pedophiles continue their actions unless they get help, regardless of how old they get, and that this problem just does not go away after talking about it a few times."

After revealing his pedophilia to a family counselor and his wife in the early '90s, Rev. Blossom continued to work for New Horizons giving sermons on sexuality to children in small groups divided by gender during many summers at their facility located in Ontario, Canada called Missanabie Woods Academy. Parents and students were never informed of his pedophilia nor had law enforcement officials notified of the precarious circumstance of a minister diagnosed with pedophilia overseeing or giving sermons to a boarding school for youth. An alumnus writes, "He creeped me out during the sermons as he seemed to get overly excited about it. I specifically recall a story about a woman who fornicated and had HIV as a result. The guy who supposedly gave it to her gave her a gift to open on the plane home from her trip and it was a coffin necklace. This was to scare us from our natural desires and not engage in premarital sex." Another student wrote, "They separated boys from girls for that sermon. He told us that God gave us curves and boys loved curves because boys loved cars, which also have curves. It was okay to let boys fondle our curves, leering of course while he said this, but not to have sex with them because every hot blooded American male wanted a virgin and why buy the cow if you could get the milk for free? I was still a virgin at the time of this sermon. Very confusing." The boys spoke of sermons in which Rev. Blossom incorporated masturbation as a form of prayer to God.

Indiana was not the first state to revoke New Horizons' license. The revocation came after nearly 40 years of losing NHYM's foster license to board children in Michigan, Illinois and possibly Florida as well as an abrupt deportation ordered by Haiti. A series of Kissinger cables declassified in 2005 announced the immediate deportation of 43 US citizens from Caribe Vista to the Dominican Republic. In April of 1974 a telegram from the U.S. Embassy in Port-Au-Prince sent to the U.S. Secretary of State Henry Kissinger pronounced, "The official reason for the deportation apparently is failure to comply with the immigration laws of Haiti. However, it came as a shock to the government of Haiti that a group of this size could operate in Haiti for over two years without coming to the attention of the authorities. Further, there had been runaways and other problems which probably came to light under investigation and which may have convinced the government of Haiti that there were simply too many potential problems associated with the continued presence of the "Caribbean Vista" program in Haiti."

Rev. Blossom told the media and parents a different story about the Haiti deportation. In an interview with Grand Rapids' Press journalist Jane Haradine, Gordon Blossom asserted there was a chance of establishing his facility in Haiti if he paid a fee but he refused to do so. "Blossom says obtaining legal status in Haiti requires payment to the government, which he refused to make. He said he had been advised by missionaries not to start payments." An alumnus who assisted in revealing Gordon Blossom's sexual abuse of his daughter recounts a personal conversation she had with co-founder Timothy G Blossom. She wrote, "I heard from Tim that he heroically rescued a blond girl that was stolen by a gang that dealt with human trafficking and sex slaves. That was one story. The other came from a former student that said Gordon Blossom pissed them off so they tried taking one of the students as payment." American Ambassador of Haiti Howard Isham sent a definitive telegram from Port-Au-Prince to Secretary of State Henry Kissinger addressing Pastor Gordon Blossom's sudden deportation. Ambassador Howard Isham writes: "The expulsion of the 43 Americans involved in the Caribbean Vista program may be the forerunner of a series of deportations of individual Americans who are self-proclaimed missionaries. Haitian authorities have recently undertaken a review of all foreign missionary activities in the country." Isham goes on to say, "It is the intention of the Government of Haiti to weed out the "diploma-mill" pastors who have founded so called churches in reality to promote their own interests by taking advantage of ignorant people. The Haitian press has scored these activities as tyrannical and as diverting the peasants from their urgent tasks through excessive proselytizing devoid of any practical economic or social purpose." It is clear that American Ambassador Isham and the Government of Haiti never had any intentions of accepting payment from the Blossoms to stay in Haiti, stating, "It is suggested that this background be kept in mind should those Americans in this dubious category who are asked to leave Haiti in the future seek to generate publicity critical of the Government of Haiti on this issue."

New Horizons drew national attention during the '70s to conditions at their facility after parents, judges and investigators questioned transport of children to Haiti and Rev. Blossom's unusually punitive care given to state wards. An article in the Detroit Free Press prompted legal action against New Horizons and the judges that placed the children in the ministries care. "Jimmy is a 15-year-old status offender who was declared 'incorrigible' by the court. He was to be removed from a Michigan children's shelter and sent by the State of Michigan to Caribe Vista Youth Safari in Haiti. Only quick action by a legal aid lawyer prevented his exportation. At the Safari, Jimmy would have received what the owner called culture shock therapy. Culture shock therapy is based on the theory that if a child is removed from his home environment and exposed to a punitive living situation in a foreign country, then his behavior is likely to improve." Kenneth Wooden, a trustee of the National Coalition for Children's Justice of Washington, DC visited the facility in the Dominican Republic and said, "The poverty I saw would make the rural south look really good. They had just got running water. The kids were warehoused. Education consisted of some guy sitting at a desk putting in time while the kids went through some correspondence courses." Court officials from Kane County Illinois voiced concern about Wooden's investigation, prompting them to stop sending girls who were wards of the court to a camp in the Dominican Republic.

Parents were often denied visits or phone calls with their own children, creating an emphasis on isolation and separation, not the unity and the restoration of family bonds DCS emphasizes. One parent wrote, "In addition to strongly disagreeing to the extreme tactics used by NHYM, I was greatly angered by the isolation of our daughter from the rest of her family. We admitted her in the program with a goal of healing and strengthening our family. What they did was to completely isolate her and emotionally and physically abuse her. In January 2000 they notified us that they wanted to send her to Escuela Caribe in the Dominican Republic. It was at that time that we began plans to remove her from the program." The parents placed her at another facility where, "the counselor treated her for conditions that resemble her being removed from a cult-like experience associated with her stay at NHYM. She continues seeing a psychiatrist for post traumatic stress syndrome from her treatment at New Horizons."