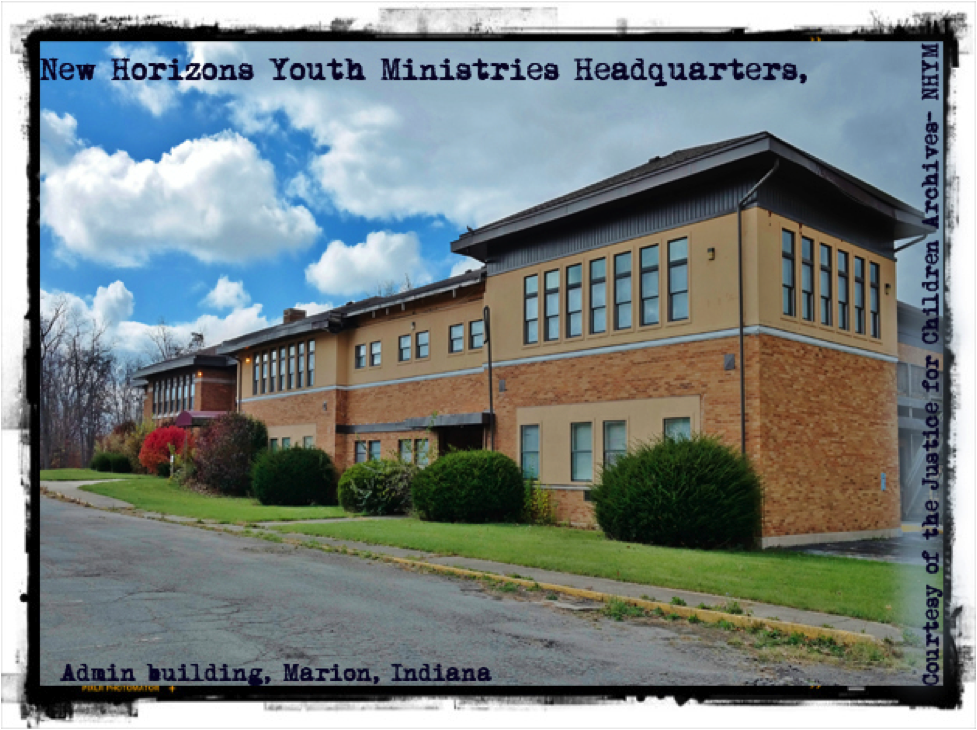 New Horizons Youth Ministries headquarters- admin building. Before the group homes were built this building also served as dorms for students, staff quarters and Rev. Blossom’s apartment as well as classrooms in the mid 80’s. Built in 1910, it was formerly known as the Roosevelt School. 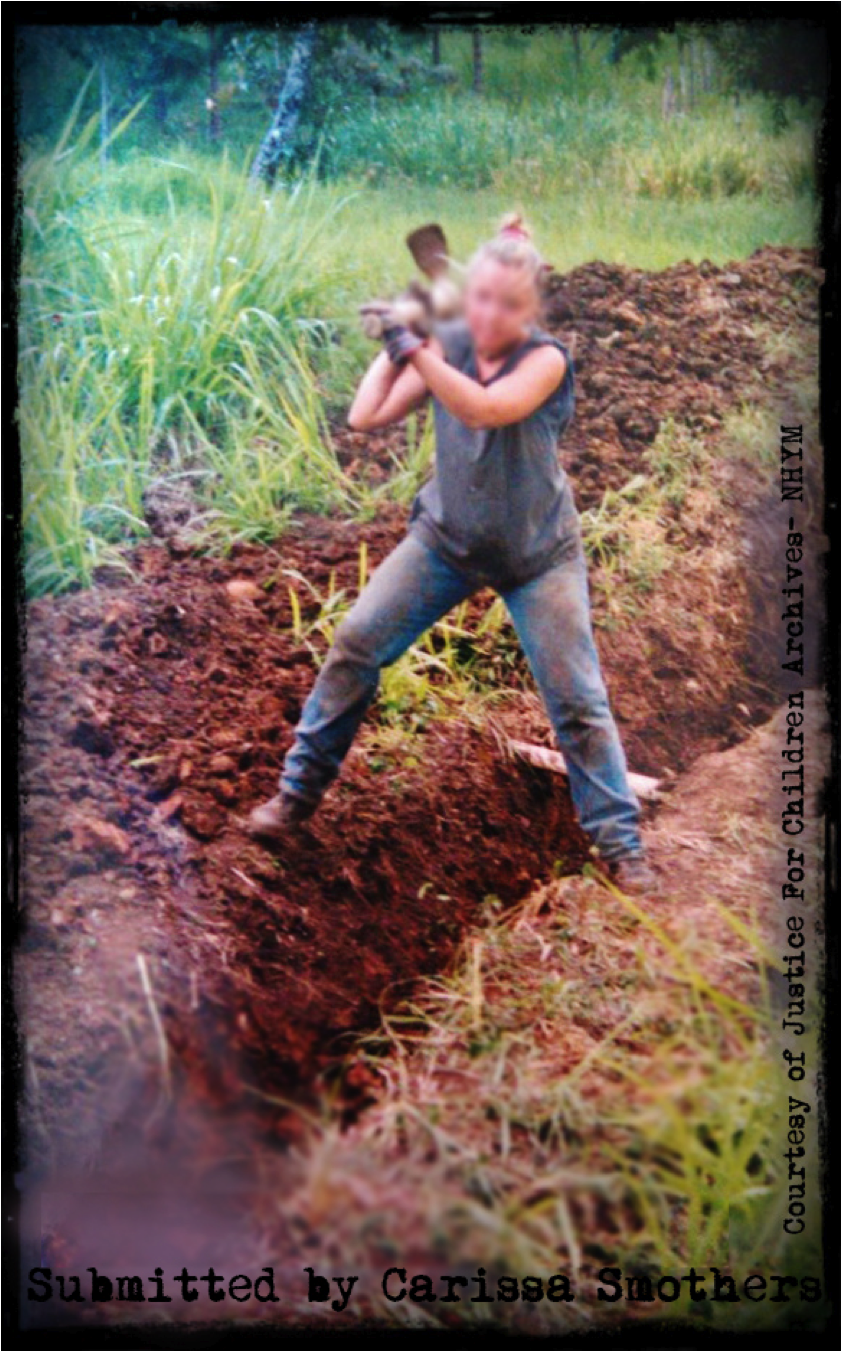 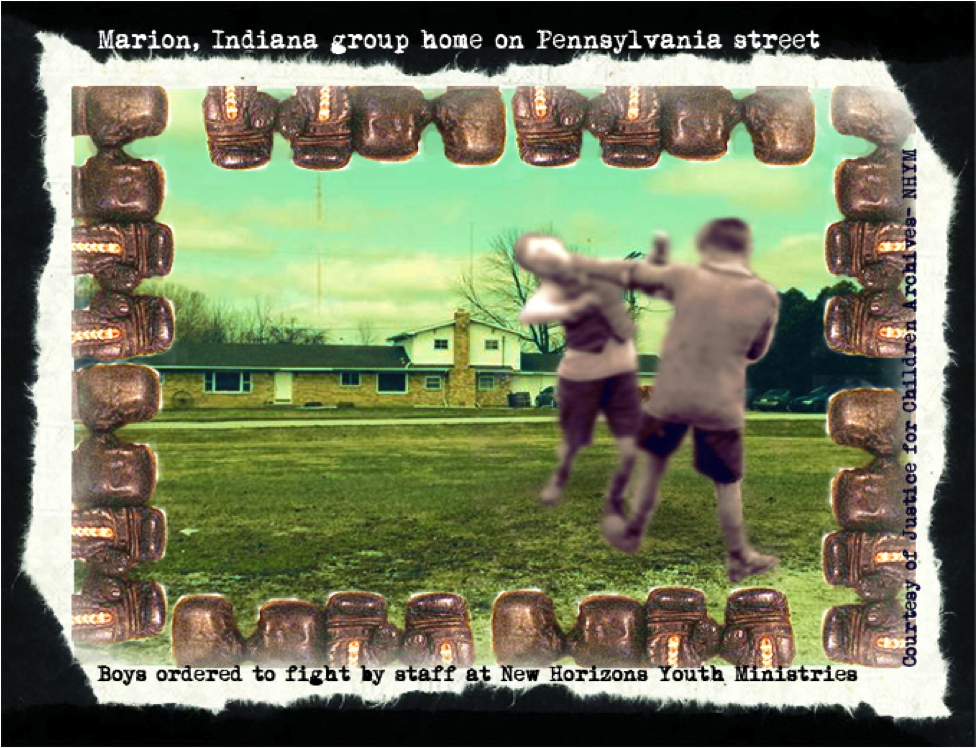 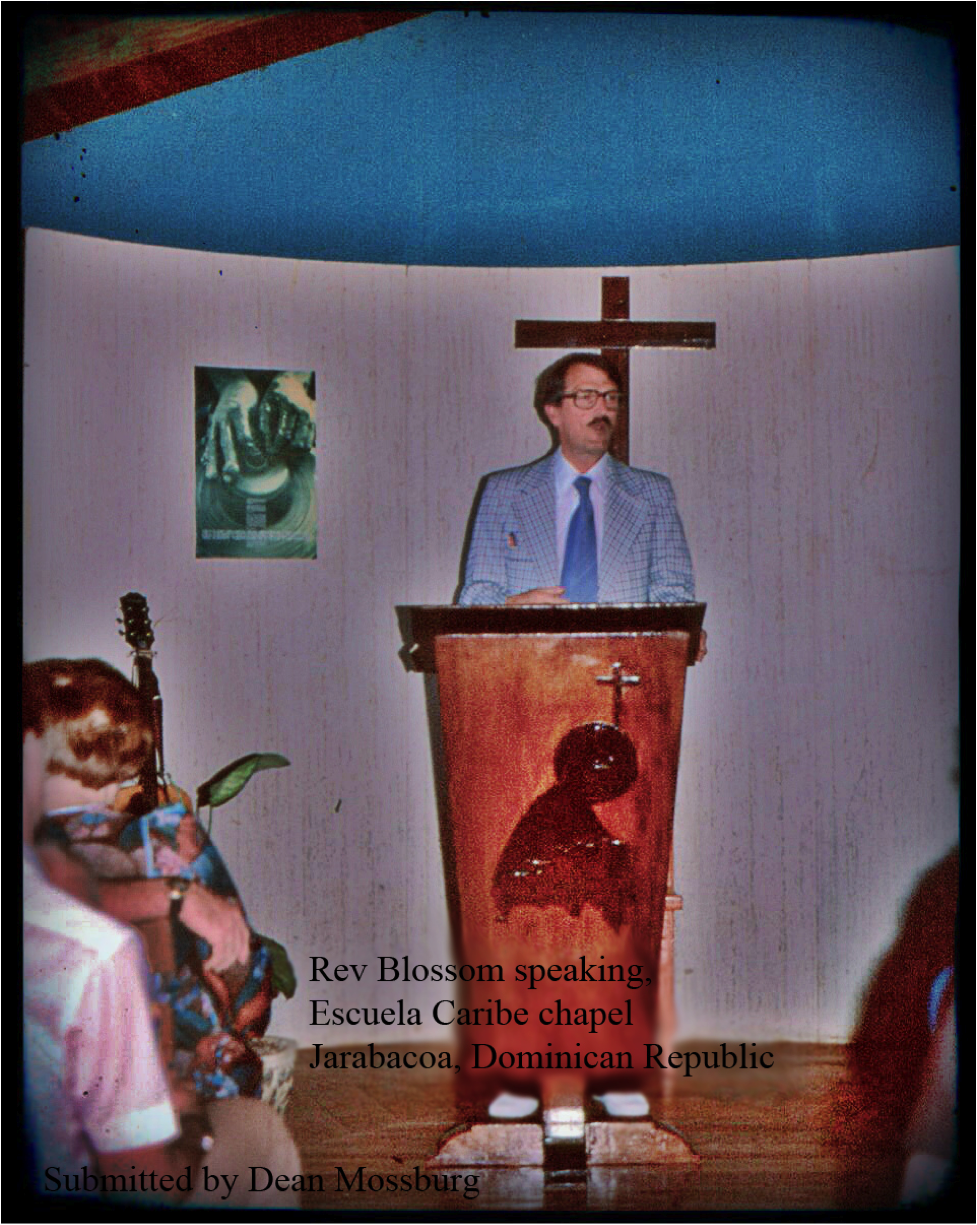 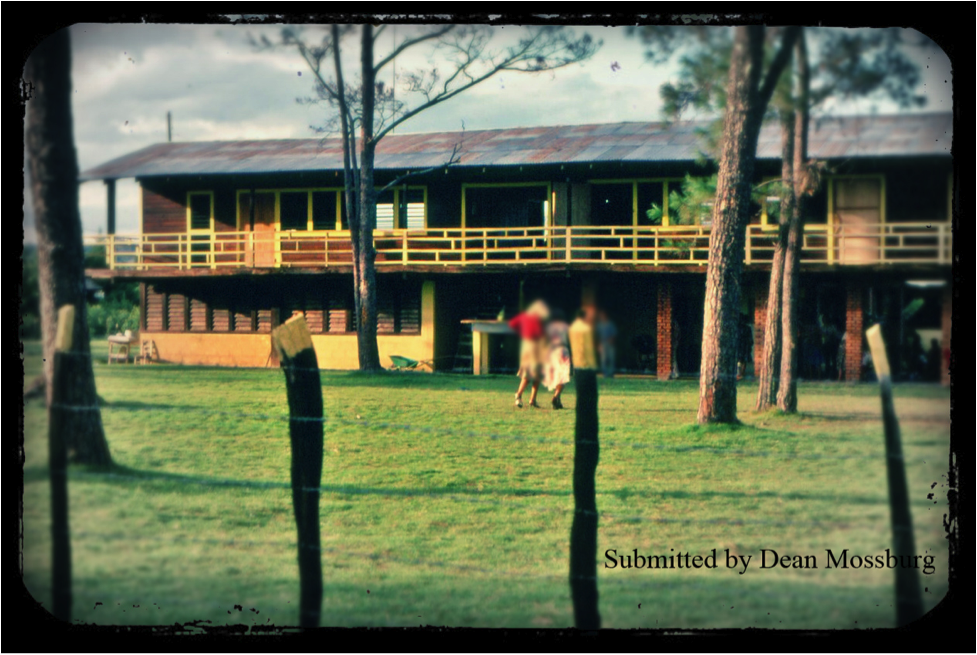 New Horizons Youth Ministries headquarters- admin building. Before the group homes were built this building also served as dorms for students, staff quarters and Rev. Blossom’s apartment as well as classrooms in the mid 80’s. Built in 1910, it was formerly known as the Roosevelt School.

After losing his foster license, Rev. Gordon Blossom failed to find the intense backing of business leaders and support of judges as he formerly did after incorporating Honey Creek Christian Homes in Michigan. Blossom gained a reputation as excessively abusive to children and a difficult person to work for. The program was unable to retain or attract the highly skilled and competent staff promised to parents. Blossom took refuge from his earlier critics by creating a web of staff composed of relatives and bible college graduates willing to work for stipends well below minimum wage.

In October of 1973, Blossom moved the corporation headquarters of New Horizons Youth Ministries from the Honey Creek Christian Home in Lowell, MI to Grand Rapids, MI. He had hoped to establish a group home for boys. The plan never commenced — the home was used instead as Rev. Blossom’s personal residence as well as New Horizon’s headquarters. Following the 1974 revocation of Blossom’s foster license in Michigan, an opportunity to use a home in Florida for girls and a home in Indiana a year later for boys provided new placement for wards as well as private contract students.

Blossom family members incorporated the Fort Lauderdale group home in 1974. Martha and Randy Fellure, former staff of both Caribe Vista and Escuela Caribe, oversaw the Fort Lauderdale home. The girls attended public school and took field trips to Disney World, transitioning from their return from the Dominican Republic. The Fellures left the program about the same time the home dissolved in 1975.

In March of 1976 a home listed on Pennsylvania Street in Marion, Indiana was incorporated as the Indiana office of New Horizons. It also served as a foreign non-profit until its license was revoked in 1990. The Indiana group home took in wards from Indiana and Ohio sent by judges with evangelical ties. After the revocation the home began to shelter private contract girls and was known as the Pitts House. It is unclear why the State of Indiana revoked the facility’s license. The house ceased operations in the year 2000.

Following the ministries’ deportation out of Haiti, group homes were scattered throughout the town of Jarabacoa, Dominican Republic. Students attended classes at an old convent, which also served as Escuela Caribe’s headquarters and staff housing. In the ’90s all students were moved to a compound constructed by forced student labor on the foothills of the mountains in Jarabacoa. Rev. Blossom wintered at the compound, preaching to students and working at the orphanage he established called ANIJA.

The Mclellan Foundation donated 590 remote acres of Ontario land in 1976 to New Horizons. Benefactor Hugh Mclellan, an evangelical advocate of bibles in public schools, supported Blossom’s vision of a Christian summer camp for boys and girls. Instead of shipping boys overseas, Blossom transported wards of the state to the Canadian camp, which was accessible by a 45-minute boat ride. Retaining a former Honey Creek counselor, Blossom appointed Budd Teare, a young bible study undergrad, as director of both the boys home in Marion, Indiana and at the Canadian program Missanabie Woods Academy. During the 70’s and early 80’s all of the wards placed at the group home attended public school and were taken to the Missanabie Woods facility during the summer months. The home also served as a transitioning point for private contract male students leaving Escuela Caribe.

RELATED: To Hell and Back Part 2

Students identified with authority problems — such as looking at staff the wrong way or failing to perform forced labor to staff standards — were subjected to meetings with Teare and a thick leather strap known as Mr. Black. Rev. Blossom also used a strap called Mr. Black. His daughter Shirley Jo Petersen wrote: “If anyone disagreed with him, they would have a meeting with ‘Mr. Black.’ Mr. Black was very real in our house, and he got used often, especially on my older siblings. It was a black barber strap used for sharpening blades.” A similar strap was used at the Dominican facility named Mr. Brown, in reference to its brown color.

Strappings were but one enforcement method used at the facility. Alumni describe numerous instances in which Budd Teare ordered students to fight in boxing matches or mob style beatings. An alumnus recounts how Teare orchestrated a beating of a student in 1989: “Several students beat him. The boy’s face was a mess, so all the staff and students in Canada that year were aware of this. Many people could hear it going down. It was so weird how everyone was acting like this was normal and pretending they couldn't hear it and Budd just went about his business like this was just another day at the office.” Another alumnus gave a similar account: “Budd Teare ordered (high ranking students) to take a kid from the group home out to the forest and severely beat him. He had severe injuries: black eye, broken ribs, and a broken arm. It took him months to recover.”

Alumni noticed that visits or public outings were timed around the healing of their wounds. Parents were frequently denied visits and public school children were kept home, allowing bruises and swelling to heal. Budd Teare left New Horizons in 1990, very close to the time Rev. Blossom confessed his pedophilia in 1991. After leaving New Horizons Teare finished a 2006 doctoral thesis examining how clergy respond to sexual abuse of children. The thesis never addressed physical abuse. It is unclear if the facilities revocation was related to these incidents. Teare failed to respond to numerous requests for interviews.

Numerous alumni account violent and humiliating episodes at all three facilities in which staff slammed them forcefully in to concrete walls or floors. An alumnus writes Redwine, “often threatened me with my life. He would say, ‘Just you wait. I won't kill you, but if anything happens to nasty children like you, we just won't save you. Not only will your parents believe what I tell them, but they will raise money and support us after your death.’” Another alumnus shared a memory from the Dominican Republic: “The director asked me to ‘deal’ with a student that was in the Quiet Room. The student was having flashbacks from PCP and the staff wanted to give him a shower. We took him to the shower room and the staff gave him a floor brush to scrub himself. When he started to cry and refuse to do as he was told, the staff ordered me to beat him.” Charles Redwine, and NHYM president emeritus Timothy Blossom failed to respond to numerous requests for comment to NUVO.

Capin Crouse and Company discovered New Horizons’ destruction of documents while performing an independent audit for the state during the fiscal years of 1990-1991. It is not known if the record destruction of 1991 had anything to do with Blossom’s confession of pedophilia or other incidents of abuse.

Julia Scheeres published the first autobiography written by a New Horizon alumna. The author of Jesus Land wrote that during the ’80s Rev. Blossom, “threatened to strip me naked and beat me black and blue, which he claimed he'd already done to another girl who refused to obey her parents.” The scene Scheeres describes is eerily reminiscent of torture scenes straight out of a Jean Rollin’s sexploitation film rather than a protestant pastor. In Rollin’s 1973 film Schoolgirl Hitchhikers a girl is stripped and whipped, her golden locks hacked away as a final humiliation for what thieves believed was a jewel theft. In 1950 Rev. Blossom screened the 1937 film Assassin of Youth as part of a Youth Conservation Crusade. Though the film was considered too risqué for general audiences, Rev. Blossom showed it anyway. The film gained popularity as a propaganda tool for evangelical youth ministries.

Although Shirley Jo Petersen insisted her father had no contact with female students until the ’80s, parents, students and photographs disprove her. Petersen had visited Escuela Caribe in the ’80s when her father preached and provided pastoral counseling services to male and female students at the New Horizons facility. New Horizon alumni recall out of court settlements the Blossoms made with parents of children sexually abused by New Horizons staff. Numerous alumni recount four staff members that sexually abused children at the facility. Only one was reported and prosecuted. Many continued to work on staff with Rev. Blossom permitting some to directly work with children while giving others menial tasks.

RELATED: To Hell and Back

With plans drawn up similar to Blossom’s Honey Creek expansion, a large track of land was purchased in 1982 by New Horizons Youth Ministries in Marion, Indiana. The former Roosevelt School eventually served as a Christian academy for students returning from other New Horizons facilities. Though students at first were housed in large classrooms transformed in to dorms, group homes were eventually replaced them.

New Horizons Academy and its group homes closed along with the Canadian facility in 2010.