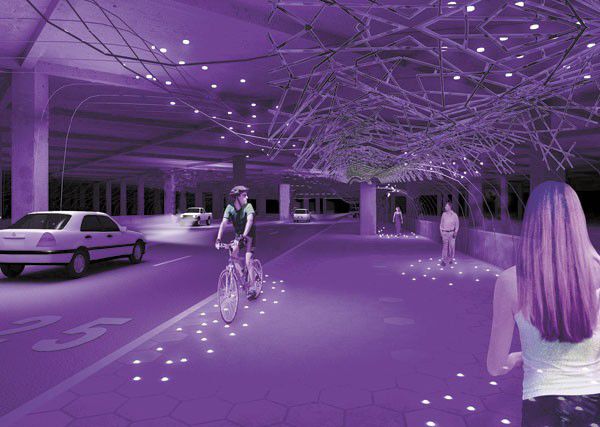 The moist conditions present in the parking garage over Virginia Avenue undermined the original intent of "Swarm Street," the most ambitious — and most expensive — piece of art along the Indianapolis Cultural Trail. 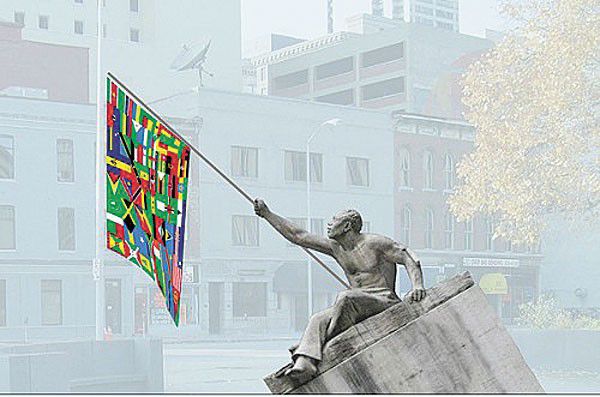 The moist conditions present in the parking garage over Virginia Avenue undermined the original intent of "Swarm Street," the most ambitious — and most expensive — piece of art along the Indianapolis Cultural Trail.

When the Indianapolis Cultural Trail officially opens as a "completed

project" on May 11, it will do so without two key pieces of public art in

place. Together they represent more than half of the trail's total public art

Swarm Street, a $1 million-plus installation below a parking

garage that stands over Virginia Avenue, has been delayed more than a year and

a half because of water damage and may never function as intended. And it will

Trail leadership in late 2011 in response to community protest.

Delays and difficulties can be chalked up to high hopes,

interview with NUVO: "The public art component was hugely ambitious and

the trail is hugely ambitious. And on the public art front, some of our huge

ambitions didn't work out, but I wouldn't trade that for making our ambitions

smaller. We're celebrating the completion of the trail, but because of this one

designed right now. Is that disappointing? Yeah, but I don't think it's a big

Both projects are largely funded from the Cultural Trail's

(The remaining investment consists of a $250,000 grant awarded by ArtPlace, a

public-private foundation that supports strategic investments in art and

leadership, meaning that the project's key decision-makers are Payne, as the

president of the Central Indiana Community Foundation, and Lori Miser, the director

of the city's Department of Public Works.

The project that will replace E Pluribus Unum is now

Office and the Arts Council of Indianapolis, control having been ceded by

The two delayed projects represent at least $1.2 million of

the Trail's $2 million public art budget, not factoring in the ArtPlace grant

or any additional funds to be spent on Swarm Street. Any funds not spent

on Swarm Street (beyond the $975,000 originally budgeted) will go to the

"Every dollar I have to spend on Swarm Street is

a dollar I can't spend for maintenance endowment," Payne said. "We

want to maintain the trail at a really high level, and that's where the tension

When announced in April 2011, Swarm Street, a

Studio, was to be the Trail's "last and largest public art installation"

and was "anticipated to be complete by the end of the year." The

piece, whose infrastructure has been installed along Virginia Avenue under the parking

garage south of Maryland Street, was to consist of thousands of LED lights

connected to motion sensors activated by pedestrian and bicycle traffic.

Acconci described to NUVO in late 2011 how the piece would

work: "So let's have a system where, as a person goes through, you

you. They follow you. They become 'attached' to you as you walk. But if someone

comes toward you from another direction, or if someone else walks beside you,

some of your lights go off and lights turn on around the other person. I hope

people will realize they're doing it. I think they will."

According to Mindy Taylor Ross, the public art coordinator

for the Cultural Trail, the piece was functioning as designed by mid-2012. And

then the rains came.

"We thought we would be pretty safe because it's

sheltered in a garage, away from wet weather," Ross said. "And no one

said anything about it being a wet space. We built out the project last spring

when it was incredibly wet, and we realized there was a ton of groundwater

rains inside the garage. Electronics started to short out and fail."

The Cultural Trail's design and construction partners have

been "testing and coming up with redesign solutions" after the piece

sustained water damage, according to Ross, who said that a more water-resistant

prototype is currently undergoing environmental testing. Payne said that he

expects results from those tests to be processed by June, at which point he and

Miser, of the Department of Public Works, will decide how to move forward.

"We are emotionally and financially committed to

have to end up compromising on our vision for Swarm Street, so that it still provides light, is interesting to

look at, but doesn't have as big a wow factor."

Why didn't the design and construction teams conduct

environment testing before the piece was first installed? "With hindsight

being 20/20, we wish we would have done groundwater testing," Payne said. "Everyone

who seemed to know a lot about that garage represented it as waterproof. It's

covered, no water gets through; everyone had an assumption that seemed to be

updates on Swarm Street progress,Ross said that "we're not

keeping any secrets about it."

Payne said he and other Cultural Trail leaders started out

with the best of intentions when they hired Wilson, a New York-based artist, to

design a piece for the Trail. Payne wanted to be "inclusive" — contacting

the Trail's public art collection — and the project began with meetings

between Wilson and the local African-American community.

Fast-forward to December 2011, when the boards of the

Wilson's piece, following the "conclusion of a two-year community input

Monument. On the monument, the freed slave holds in his right hand his unlocked

shackles. Wilson's version would have had the slave holding in the same hand a

flag of the African diaspora.

Image, editorialized that "the city of Indianapolis should not be in the

for the sake of artistic expression, particularly those that have been

Cultural Trail leadership that not only should the project be discontinued, but

The Greater Indianapolis Community Foundation took over the

which has proved its public arts prowess through projects such as 46 for XLVI,

to become a partner on the project. A call to artists with a deadline of July 8

emphasizes that any proposed pieces must positively represent the city's

African-American community. But that doesn't mean a piece will be chosen based

merely on how enthusiastic it is, according to Arts Council CEO and President

"Let me be clear: This is a real public art process,

and we're interested in finding a work of the highest artistic quality,"

Lawrence said. "We're keeping this as open as possible to allow artists to

bring forward whatever they're going to propose."

A jury comprised of art experts and community members who

opposed the Wilson project will select the semifinalists, who will be awarded $1,000 each to

piece, with $25,000 retained to cover maintenance and other costs. The scale

models will go on display in September and October for community comment, and

the artwork will be installed on the Cultural Trail in summer 2014, according

to the project timeline.