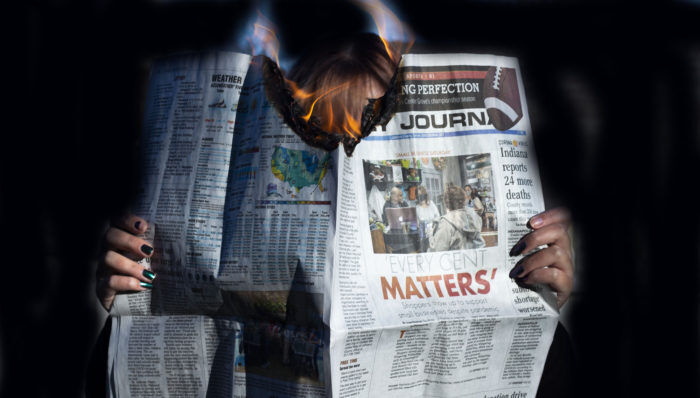 Newspapers have faced declining revenues and newsrooms have been gutted in recent years. Photo illustration by Emily Ketterer, TheStatehouseFile.com 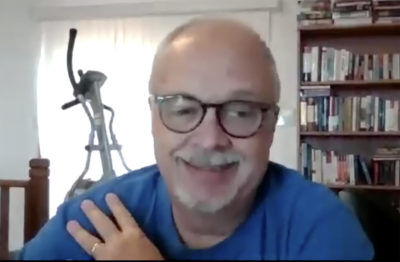 Greg Weaver, a former editor at The Indianapolis Star. 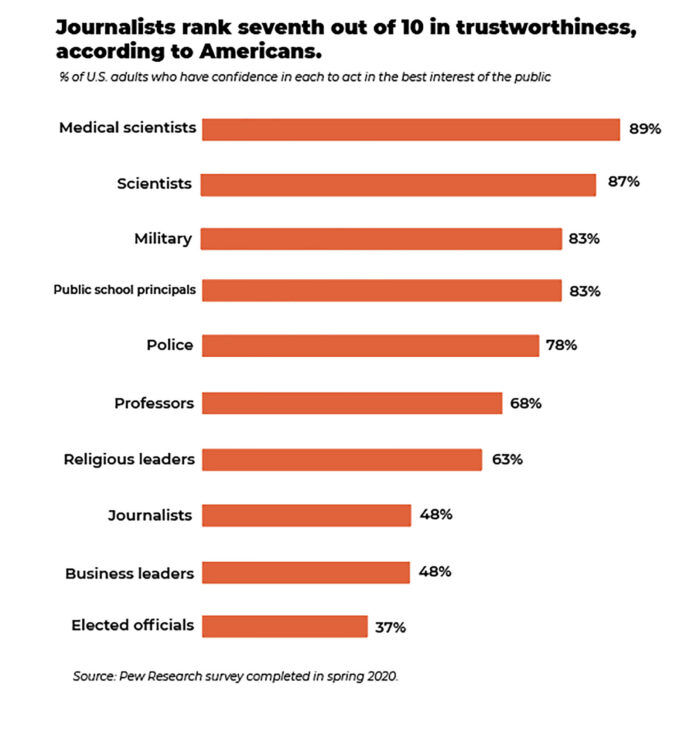 Pew Research survey completed in the spring of 2020. Graphic by Emily Ketterer, TheStatehouseFile.com

Greg Weaver still doesn’t know if he made the right decision to retire early from journalism.

Last year, Weaver, who is in his late-50s, ended his more than 30-year-long career in journalism when he accepted an early retirement buyout from The Indianapolis Star, a newspaper he worked for since the 90s.

It was a tough decision, he said, but he felt like this job would not see him through to his actual retirement.

“I went through 10 rounds of layoffs in 10 years, so every year the staff got smaller. Every year, you started to wonder whether your number was up,” Weaver said.

Weaver now works as communications and operations director for the Indiana Forest Alliance, but that passion for reporting and storytelling never left him.

“Journalism will always be my passion and thankfully I have found an outlet for it through freelancing,” Weaver said. “But I feel lucky to have found another avenue for truth-telling through environmental advocacy and communications.”

News breaks almost every minute now, and the industry is changing to adapt to the digital age. But even with more news constantly presented, the industry is shrinking with newsrooms losing reporters every year. And with the ever-growing “Fake News” rhetoric, it seems as if journalists’ careers are under fire at every moment.

From the viewpoints of local journalists, these problems are a heavy weight to bear while working. But they don’t see this industry as a dying field. It’s just changing and will prevail.

The newspaper industry has lost more than 50% of its employees since 2001, according to the U.S. Bureau of Labor Statistics. Experts in the field all agree this loss is due to traditional news outlets’ “failed business model” of relying on subscriptions and ad revenue for profits, and then refusing to catch up to the digital age.

“For decades, we’ve known people wanted their news online. Newspapers were slow to change,” said Al Tompkins, senior faculty for broadcast and online at the Poynter Institute. “They kept doing the same thing over and over and over again.”

When the internet first became prominent, news outlets thought it would be a fad. Most news organizations made the mistake of giving away content for free online that people generally would have to pay to read in print, said Mary Beth Schneider, a veteran journalist, who worked at The Indianapolis Star for more than 30 years, and served as an editor for TheStatehouseFile.com from 2019 to 2020.

“The news business was so stupid and didn’t take it seriously … they thought, ‘Well isn’t this cute? People can read news on their computers,’” Schneider said.

That mistake is one traditional newspapers may not come back from, Tompkins said. The national outlets that did jump on digital media, such as The New York Times and the Wall Street Journal, are doing very well, but local papers will continue to struggle.

“Once a customer is getting something free, it’s very difficult to start charging them,” Tompkins said.

The Recorder is a fraction of what it used to be, and it’s hurting, she said.

“There’s that saying that when white America gets a cold, Black America gets the flu or pneumonia. The same thing goes for newspapers,” Boyd said.

She thinks people often overlook local news, and don’t realize the impact smaller papers have. The Recorder specifically focuses on telling untold stories of the Black community, and there would be many stories that went untold without it.

“We’re focusing even more on local-local,” Boyd said. “We’re getting down to issues that a lot of times you wouldn’t even think about because we come from a different perspective.”

The traditional news industry needs a new business model and there is no solid solution. Public broadcasting, which is funded by donations and foundations, is a part of the industry that is growing nationally and in Indiana, so that may be a solution to the hurting traditional outlets, said Brandon Smith, Indiana Statehouse bureau chief at Indiana Public Broadcasting.

There is also nonprofit news, with successful organizations like Chalkbeat and The Texas Tribune.

“It’s not dying, there are just segments of the industry that need to figure out what does the future look like,” Smith said.

Schneider remembers typing her stories on a typewriter, and ripping up the paper, if she wanted to rearrange a story. That, like many practices in journalism, is far in the past now with the digital age.

Social media and the internet turned the news into a 24/7 business, with journalists meeting deadlines every minute, it seems like. Schneider saw first-hand the impact the digital world had on news, and she embraced it while she was at The Star.

“I remember I turned down a job for the AP because I didn’t want to have a deadline every minute, but then I ended up doing that anyway here,” Schneider said.

Now, she’s dubbed as the “Twitter Lady,” a name she picked up while covering the Statehouse, for live-tweeting news coverage as it was happening. Twitter rose to more prominence around 2010, which is when Schneider decided to send live tweets about the Right to Work debate happening at the Statehouse.

“I was in there tweeting the live debate, and the labor guys picked up on that, and I gained thousands of followers overnight,” Schneider said. “It is instantaneous to put people right exactly where you are.”

With the deadlines being constant there is less time for reflection as a daily news reporter, and there are a number of added responsibilities to worry about, Weaver said. Now, journalists have to know how to be active on social media, take photos and videos, and write quickly to meet deadlines online.

“You’re just trying to put the news out at that moment, you don’t really have time to reflect or be intense about it,” Weaver said.

Digital and social media have greatly benefitted journalists though, especially as a way to communicate with readers. With newsrooms shrinking, it is difficult to cover everything, but social media allows journalists to see what the public cares about the most, a form of communication that was not as easy before, said Allison Carter, senior digital manager of content for Indy Star.

“When I see a lot of normal, non-journalist people talking about something, I’m like, ‘OK, we need to address this,” Carter said. “I sometimes get a lot of weird looks from my more traditional colleagues, but most of the time it works out.”

Carter is very active on Twitter, and like many journalists, she’s had to learn to find that balance between being a professional online while also being a human-being, but also being careful to not spew her opinions on her timeline.

She uses her platform to not just Tweet news, but she also puts her own personality into her posts when giving analysis or criticism on certain issues she knows are facts, including wearing masks, climate change or election results, she said.

Smith also frequently uses Twitter to give analysis on state issues he covers. It is difficult to find the line between being critical or just ranting, he said.

“That’s something I’m constantly battling,” Smith said. “Whenever I tweet something, I’m always thinking about, ‘If someone were to challenge me on this, can I back it up?’"

A profession under scrutiny

Forty-eight percent of Americans say they trust the media to act in the best of the public’s interest, according to a survey conducted by the Pew Research Center in the spring.

The word “Fake News,” first touted by President Donald Trump, is thrown around to describe the news media today. Reporters have been labeled as the “enemy of the people,” and in an industry that is already struggling to get by financially, hearing these criticisms is difficult, Smith said.

“It weighs you down, especially in an industry that is already difficult to be in to begin with,” Smith said. “When I talk to student groups, I love to see they’re interested in this industry, but on the other hand, my question half the time to them wants to be, why?”

Media has always been an attacked industry, and some criticism is valid, but many times, it comes from a public that does not understand how journalism works, Boyd said.

“Oh, it pisses me off, to put it mildly. We are busting our busts in this industry to do our best,” Boyd said. “There is nothing wrong with us being asked to be better, but the problem is that most people don’t understand what we do. It’s annoying when people try to tell me how I’m not doing my job.”

While the public may ask journalists to be “less biased,” it is impossible for a human to be completely objective, and that should not be the goal of journalism, Smith said. He added that reporters should not put it upon themselves to change the public’s trust in media, but should instead continue to focus on the job and reporting the truth.

“The goal of good journalism should be to recognize your biases and make sure it doesn’t unduly influence your writing,” Smith said. “But chasing this idea of balance creates more problems.”

In national media, there are blurred lines between commentary and news, Tompkins said, which is confusing for the general public, he said. But in general, by human nature, people tend to rely on news that fits their beliefs anyway, he said.

Despite the plights in the industry though, journalists will always be needed, Weaver said. It is a difficult profession to be in, but those who really want to do it will prevail, he said.

“Journalists will never be the enemy of the people,” Weaver said. “They will always be the superheroes of the truth.”

Emily Ketterer is a reporter for TheStatehouseFile.com, a news website powered by Franklin College journalism students.