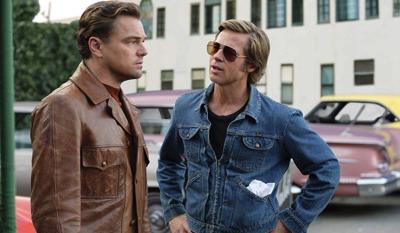 Anyone looking for a normal movie experience should probably avoid Once Upon A Time In Hollywood.  If you’re even passingly familiar with director\screenwriter\actor Quentin Tarantino’s work, you already know that.

If, like me, you’re a Tarantino fan, Once Upon A Time isn’t his best, but you’ll enjoy it.  If you’re not a devotee, you’ll probably hate it, unless again like me you just enjoy watching Brad Pitt take his shirt off and\or have domination fantasies that involve Leonardo DiCaprio.

Spot on casting has always been one of Tarantino’s strengths and pairing Pitt and DiCaprio in what for about 66% of the movie is a pretty standard buddy pic is inspired.  Those two are about as close to old-school movie stars as we have these days and watching them bounce Tarantino’s dialogue off each other for an hour or so is pretty entertaining.

Throw in cameos by the likes of Al Pacino, Kurt Russell, Damien Lewis (playing Beech Grove’s own Steve McQueen), Dakota Fanning, Bruce Dern and a host of other Tinsel-Town notables and you get a lot of memorable exchanges that aren’t about much of anything beyond “Hey, Hollywood used to be really cool, didn’t it?”.  About the only Tarantino regular who doesn’t drop by to deliver at least a quip or two is the director himself.  I kept expecting a disorienting appearance but he never showed.

This lack of traditional story-telling structure is a classic Tarantino form that’s taken to the extreme in this movie.  The film starts with what appears to be a plot and then meanders about for 90 minutes or so before getting back to a plot for the Grand Finale.

Tarantino’s wandering always involves a certain amount of “Hey everybody, look at what stylish set-pieces I can create” and arguably not a great deal more.  I understand why you might consider this to be an increasingly tiresome and narcissistic trope, but he pulls it off better than anyone else.  More often than not the detours are a lot of fun, so I give the man a pass on his indulgences.

The biggest set-piece in Once Upon A Time, not to mention one of the biggest in recent memory, involves the Spahn Ranch, the Manson Family compound.  I think that even if you weren’t familiar with this sorry chapter in American history, Tarantino’s gift for creating a sense of dreadful foreboding would be palpable.  The omnipresent grime is overpowering and Pitt’s conversation with Dern’s demented gimp is beyond creepy.  His exchange with Fanning’s sinister Squeaky Fromme and a few other residents of the ranch is even more harrowing.

I was concerned when I heard that the Manson Family was to be a part of Once Upon A Time because we’ve seen that story told in almost every conceivable format.  Animation is about they only one we’ve missed so far and I expect that will come sooner or later.

I wondered why Tarantino was interested in dealing with such a heavily trafficked subject.  Turns out he had a reason that we finally discover in the final scene.

If you object to Tarantino’s navel-gazing, I expect you also object to the rest of his stock inclusions.  There’s the graphic violence, which I find as objectionable as Wylie Coyote getting an anvil dropped on his head, or Mo Howard getting his tongue caught in wringer washing machine if you’re more squeamish about human violence than you are about squashed cartoon characters.

There’s also the disorienting innocence in the midst of carnage.  Margo Robbie’s angelic sweetness as the ill-fated Sharon Tate is an admittedly uncomfortable portrayal at best.  But my friend Dale enjoyed Robbie in a ‘60s era mini-skirt as much as I enjoyed the shirtless Pitt, so what the Hell.

Once Upon A Time in Hollywood is no Pulp Fiction.  It’s probably not even a D’Jango Unchained.  It’s also not a sequel, or a prequel, or another comic book movie indistinguishable from a thousand other comic book movies we’ve seen recently.  It’s imaginatively written, creatively directed, exceptionally well-acted, devoid of CGI effects and not like anything else anyone in Hollywood is doing these days.

If you’re a Tarantino fan, go see the movie.  If you’re not, hang on.  There’ll be a super-hero coming along in about five minutes.