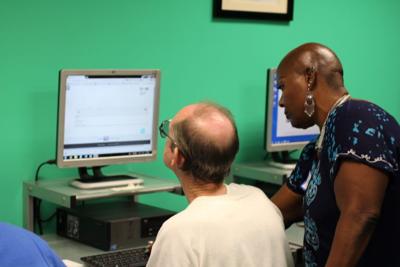 When Jeannie Reed was released from prison in 2018, she sought guidance from PACE Indy, an Indianapolis organization that enables ex-offenders to support themselves after jail time.

“I don’t think I would be where I am today if I hadn’t been able to find this building,” Reed said. “I walked in these doors not knowing my direction, and they gave me a compass.”

Reed is now a diversion specialist and peer-recovery coach at PACE, a job she started last year after working at Goodwill Industries. She counsels those who were incarcerated for substance abuse, serving as an alternative to visiting a parole officer. PACE also offers career development programs, which can combat recidivism by helping people rebuild their lives.

Each year, more than 20,000 inmates are released from prisons in Indiana, but one-third of them return to the prison system within three years, according to the Indiana Department of Workforce Development. That figure increases to 60% among those who are unemployed.

This level of recidivism can be daunting for inmates looking to escape the prison system. It can also be expensive because each prisoner costs taxpayers around $20,000 annually, and the average sentence for Hoosier inmates is 7.8 years.

Prison sentences foretell economic hardship for people like Reed because many businesses refuse to hire candidates with felonies. This is especially true for people who spend time in jail early in their lives.

The U.S. Bureau of Labor Statistics reports about one-third of the men born between 1980 and 1984 who served a sentence longer than five months and were released after age 18 had secured a job within the first few weeks of their release from prison. After a year and a half, that figure had increased to only a little over 50%.

Because employment is a challenge for former inmates, HIRE helps them find jobs. Created in 2012, the state-funded program has placed people in the food, production and construction industries among others. HIRE director Carrie Heck said the program’s goal is to help people make better lives for themselves.

“The population we serve is often overlooked when opportunities arise, so we are here to help advocate for those clients,” Heck said.

HIRE works with individuals to define career paths, Heck said. It offers Department of Labor and university certification training that can enable their clients to acquire the skills needed to pursue a career field. She said it also works to improve clients’ soft skills and match them with a business when they are ready to enter the job market.

Thousands of businesses work with HIRE, Heck said, and the number is growing. Her team established contact with 286 additional businesses in November 2020. Meanwhile, 52 members of its incarcerated clients were secured work pre-release, meaning they had jobs lined up before they left the facility gates. The average hourly wage earned by former program participants in November was $12.44.

Businesses that work with HIRE may be eligible for Federal Bonding, a theft insurance program, and the Work Opportunity Tax Credit, which gives tax credit to employers who hire those who regularly face obstacles when seeking employment.

During COVID-19, much of HIRE’s work has been in the virtual format. They have recorded lessons on interviewing and resume building for in-facility clients. They have also facilitated virtual job fair opportunities for incarcerated people.

To seek help from HIRE, Hoosiers should reach out to their local HIRE coordinator or email HIRE@idoc.IN.gov.

Programs like HIRE and PACE have proven themselves effective. Yvonne Smith, director of employment services at PACE Indy, said that only about 6% of the people who come through PACE end up back in prison. But while fighting recidivism is important, she also said encouragement is key.

“We spend time building them up—we put hope back into them. We treat them as viable individuals that can do it,” Smith said.

Despite the presence of entities such as HIRE and PACE, success is never guaranteed for people like Reed. After spending time at the Madison Correctional Facility and the Indiana Women’s Prison, she said she felt unsupported, but PACE offered a welcoming and accepting environment. Their staff didn’t judge her for her past, and they worked to get to know her and every other client, she said.

“Here it didn’t even matter that I was a felon. All that mattered was that I was a person looking for help,” Reed said.

PACE helped Reed with her substance abuse problem, she said. Its Advancing Your Career program helped her build a resume and cover letter to prepare her for uncomfortable conversations with potential employers about her felony. Finally, PACE helped her forgive herself.

“I started gaining some confidence in myself, and that shame of my past was being taken away,” Reed said. “I don’t have to be ashamed of what I’ve done in the past. Am I proud of it? No, but this is me moving forward and trying to give something back.”