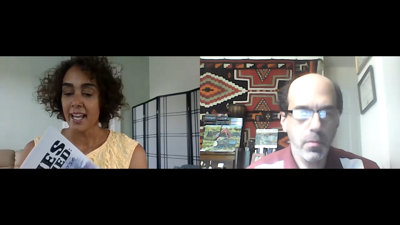 On Dec. 14, I talked with Debra Des Vignes, founder of the Indiana Prison Writers Workshop (IPWW) about their recent activities, including their publication of Stories Unchained, Soulful Prison Prose.

The last time I talked to her was at the (W)rites of Passage: Moving Beyond Incarceration event during the Spirit & Place Festival, which won the Awesomeness Award from the 2019 festival.

During the event, former inmates read their work, and participants read the work of the currently-incarcerated. Other participants included The Indiana Women’s Prison History Project and the Inside-Out Prison Exchange Program.

Des Vignes, who is a community scholar with the IUPUI English Department Writing Program, is also part of the Prison Education program, one of the incubator projects being developed through the IUPUI Arts & Humanities Institute.

Stories Unchained, Soulful Prison Prose, which consists of the work of IPWW writers, began in the spring of 2020 as an outgrowth of a line editing class in the Department of English at Marion University.

“The students came together under the direction of Mark Latta who heads up that particular writing class also was part of the writing center there on campus,” said Des Vignes. “And he said, ‘Debra —   we had worked together on another project —   and he says I have an idea. We would like to edit, as part of this class, edit their stories.’”

Des Vignes compiled the stories of the Pendleton Correctional Facility inmates enrolled in the IPWW class. “They gave me permission to have their work tweaked in minor ways to make the story flow or more succinct and the finished product was a book a compilation of their work,” she said.

Unfortunately, COVID-19 did impact the class, as the students were not able to visit the inmates and to put a face to a name and get to know them a little bit and understand their story.

In the following Zoom interview, Des Vignes talks about a new prison writing curriculum developed around the book Just Mercy by Bryan Stevenson which outlines the work of the Equal Justice Initiative and the people they represent. She also talks about the IPWW’s work with the IUPUI Arts & Humanities Institute, a study by the IU Public Policy Institute on IPWW’s work, and developing a remote curriculum for prisoners during COVID-19.

IUPUI rates second in the US, and 28th in the world, in UN sustainable development goals