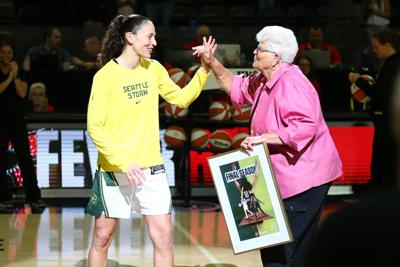 The Indiana Fever lost to the Seattle Storm 95-73 on Tuesday at the Indiana Farmers Coliseum, extending their losing streak to five games. Before the game tipped off, Storm guards Briann January and Sue Bird were honored in a pre-game ceremony. It was the final game in Indianapolis for the pair of players as each has announced they plan to retire at the end of the season.

Fever interim general manager Linn Dunn hosted the pre-game ceremony to celebrate January and Bird’s careers and present each of them with a framed picture.

January was drafted by the Fever in 2009 when Dunn was head coach of the team and played the first nine seasons of her career in Indianapolis. In those nine years, she became the team’s starting point guard in 2011, returned from an ACL tear to help lead the Fever to their only WNBA Championship in 2012, earned the only All-Star selection of her career in 2014, helped the Fever return to the WNBA Finals in 2015, and was selected to a league All-Defensive team six times. As Dunn gave the picture to January, the pair shared an emotional hug while the crowd showered them with cheers.

Although Bird never played for the Fever, Dunn and the Fever also honored her before the game as one of the great all-time basketball players. Bird has spent her entire career with the Storm since being drafted by them in 2002 and is arguably the best WNBA player ever. Among her career accomplishments, Bird has won four WNBA titles, earned 12 All-Star appearances, ranks seventh all-time in WNBA points scored, and is the league’s all-time leader in assists, games played and minutes played.

“She’s always making plays, always leading,” Fever guard Danielle Robinson said about Bird. “Just been a great example for me obviously in this league, trying to lead that way, trying to will teams to win. It’s a crazy farewell thinking back like, ‘Dang she’s really done.’ But just honored to have played against her.”

Once the game began, neither Bird nor January had much of an impact offensively, and instead, guard Jewell Loyd led the way for the Storm early. After a quarter of play, Loyd had 9 points and 2 assists and Seattle led 23-16. The Fever bounced back from the early deficit by opening up the second quarter on a 9-0 run to take the lead but after a few minutes of keeping the game close, the Storm quickly began to pull away with a 12-2 run.

Indiana kept the game within 10 points through most of the third quarter, but towards the end of the period Seattle started hitting more shots and locked down defensively to take its largest lead and put the game away for good.

“We need to stay more engaged the last 10 to 15 minutes of the game,” Knox said. “It comes with a young team.”

Loyd was the game’s leading scorer with 25 points and four other Storm players scored at least 12 points. After being honored before the game, both Bird and January struggled offensively, scoring 2 points each. Guard Kelsey Mitchell scored 21 points to lead the shorthanded Fever, who were without rookie wing Lexie Hull due to a wrist injury and rookie center Queen Egbo due to health and safety protocols.

With the loss, the Fever falls to 5-18, last in the WNBA. They will get a third and final chance to defeat the Storm this season on July 17 in Seattle.

On Thursday, Indiana will host the league-leading Chicago Sky at the Indiana Farmers Coliseum at 7 p.m. The game will be the final matchup of the season between the Fever and Sky, with the home team winning each of the first two games. Indiana’s last win before its current five-game skid came against Chicago on June 19, when NaLyssa Smith scored a career-high 26 points — including a go-ahead 3-point play with under a minute left — to help the Fever win 89-87.