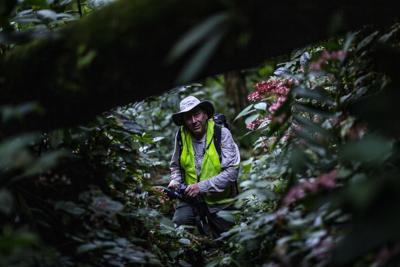 I call my cousin Dan the other Dan Grossman. He’s an independent environmental journalist who has been wandering the planet for 30-odd years now. He has reported on the fragile forests of Madagascar, the diminishing glaciers of Greenland, and countless other places for NPR, The Boston Globe, The New York Times ... The list goes on and on.

Dan sent out an email blast yesterday, linking me to an article  titled Coronavirus: Why You Must Act Now, by Tomas Pueyo. I had just finished reading an article in The Indianapolis Star that addressed the question many are asking right now — if it’s safe to be out and about.

The answer from city and state officials, in discouraging gatherings of over 250 people, has been unequivocal. The Star article starts out noting this fact. The reporter, however, focuses on smaller gatherings. The title of the piece poses the question: "Can I eat out? Go to the gym?"

The article's answer seems to be a highly qualified yes. The interviewee has sensible advice if you insist on going out to restaurants; Avoid crowded sit-down service. Also, strongly consider take-out or curbside service. As far as gyms are concerned, the recommendation is to wipe down equipment both before and after workouts, or —  better yet — exercise outdoors.

In contrast, here are the conclusions from the Tomas Pueyo article:

The coronavirus is coming to you.

It’s coming at an exponential speed: gradually, and then suddenly.

It’s a matter of days. Maybe a week or two.

When it does, your healthcare system will be overwhelmed.

Your fellow citizens will be treated in the hallways.

Exhausted healthcare workers will break down. Some will die.

They will have to decide which patient gets the oxygen and which one dies.

The only way to prevent this is social distancing today. Not tomorrow. Today.

That means keeping as many people home as possible, starting now.

What I gleaned from the two articles, after reading them back to back, is a sizable disconnect. Later that day, NUVO’s editor Kevin McKinney sent me the link to the Pueyo article, so I figured the universe was trying to tell me something. So I emailed Dan and asked him to tell me about how he and his family are preparing.

Just as an aside, the first time I became aware of my cousin Dan's work was after his publication (with Seth Shulman) of an article in The Boston Globe Magazine titled “The Price of Power: Examining the Cost of New England’s Demand for Energy“ in August, 1990. Since then I’ve always listened with interest to what my cousin has to say about our small, fragile planet. So I’m not just name dropping here, even though I am name dropping. (I also count FiveThirtyEight editor Nate Silver among my cousins.)

Here’s what Dan wrote me:

In the last few days, I have realized the gravity of threat that coronavirus poses to the United States, and to me and my family in particular. I have learned that people who have no symptoms can be contagious; so there may be many more people who have it and who can inadvertently infect others than official numbers of cases suggest.

I have  seen what has happened in Italy, where exponential growth of cases has overwhelmed hospitals.  All this suggests that it is critical for communities to slow the spread (so the burden that falls on hospitals, especially ICUs) is spread out. Likewise, it means that the worst thing for me and my family would be to get sick, potentially requiring hospitalization, when everyone else also has the same needs. So we are doing everything we can to reduce our exposure. We are no longer engaging in any activities, such as dining out, that put us in close quarters with a lot of other people. The only exception is required shopping. Also my wife is a healthcare professional who must continue attending to her patients. At this point, the likelihood that any one person has the virus is low, but if you multiply that by many people the probability of infection can be much higher. We are also reducing interactions with friends and family. To avoid isolation, we are beginning to set up virtual meetings. Before we realized the gravity of the outbreak, we were planning to have a game night for our neighborhood at our house later this month. Now we have moved up the date and have made it virtual. We may have some sort of virtual talent show as well.

I have read credible estimates that there could be many hundreds of thousands of deaths in the coming months. The combination of so many deaths and the necessary government responses to this crisis could cause shortages of supplies. I have stocked up on important staple items such as beans, rice, flour, oats, some canned goods and toilet paper.

I may be an outlier, but I also worry that staff shortages or other disruptions in normal activities could cause power failures. I've discovered that my hybrid car makes a great generator. So I have purchased a 1000 watt power inverter to convert the 12-volt output of the car to 120 volts that I need to run things like my computer and the electronics that run the boiler that heats our house.

There you have it.

As far as my own preparations are concerned, I'm not sure if I'm ready to go out looking for a home generator — yet. Where are you, dear reader? What do you think? It's certainly a good time for a fact-based conversation.

Commentary: The Virus and the Economy

At a closed board meeting, IPS approves measures to aid staff amid coronavirus, expands innovation schools

The Indianapolis Public Schools board gathered Thursday in a sureally empty room at the district headquarters, with wide gaps between those pr…