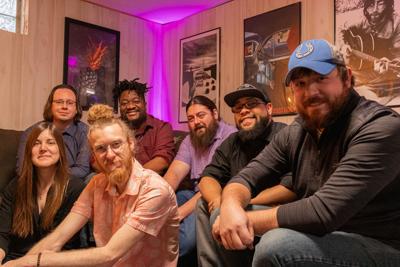 Audience members will play a huge part in determining who will take home the grand prize at the 2019-20 Hi-Fi Battle of the Bands, sponsored by MOKB. It has been the biggest Battle ever hosted in Indiana, with 72 first-round participants. Only local talent from Indiana was showcased, making that number even more impressive. The competition began on October 2, 2019 and will come to its conclusion on February 15, 2020. The winners will be rewarded with a grand prize of a touring van, a round of vinyl pressings, and $10,000.

The final ranking will be determined by a combination of judges' votes and audience votes. Each audience member will vote for three bands, and the outcome of those votes will make up 62.5% of the final scores. My goal with this series of articles is to give you a chance to get to know each of these eight finalist bands a little better before the finale at the Vogue.

Getting the band together

The original members of Audiodacity got their start at Ball State. Those members were Ben Jarvis, Jason Ehizokhale, Cody Herring, and Adam Fox Woodgett. They all were playing acoustic instruments and had been jamming at house parties. In 2011 they decided to make the jump to electric instruments form a band and to get on stage.

Mike Sheldon has been with Audiodacity since 2016. He is actually the fifth or sixth bass player the band has had. Their first they lost to the pursuit of another band, ironically enough with Kyle Perkon, who is now a member of Audiodacity. Then they quickly went through several more that either wasn't a good fit musically or did not have a personality that meshed well with the band. Finally, they found Mike, and they have had him ever since.

Cecily Terhune was added in the October of 2018. And while Kyle did not officially join the band until the beginning of 2019, he had played with most of Audiodacity's members going as far back as high school band.

Kyle and Ben also played in the band Veseria, which made it as far as placing third in semi-finals at the Battle. When asked what it would have been like if they would have had to compete against themselves in the competition, Ben's response was, "It would've been very interesting, it would've been an interesting night, and I would probably have been exhausted."

Audiodacity describes their sound as a fusion of funk, rock, and pop. "There is one word I always use to describe it, even though it means basically nothing, and that is eclectic," Cody. Audiodacity got its start as a cover band. And that knowledge and that background have translated into what they do now. Each member comes from a different musical background, and they all grew up listening to different things. Since they take inspiration from all of that, you will hear songs that are heavy on jazz, or rock, or sometimes other things, but at its core, every song will still sound like Audiodacity.

The band started making original music on an impulse. In 2011 or 2012, Jason approached the group and pitched playing at the Battle of the Birdy's that year. They had two weeks to write five original songs. That year they made it to the finals, which was the encouragement they needed to continue making original music. Since then, they have written upwards of a hundred hours worth of music and will continue to do so as long as they can.

While the writing style they use is always changing, they have two primary ways that a song will get started. Either someone will bring a chord, a progression, an idea, or a lyric to the group and they will work on it from there. Or Adam will go on one of his legendary binges. Adam describes what happens as having a constant radio playing in his head, and while that is happening, he will write whole songs in one day, or at the very least, the majority of one. Then he brings it to the group, they will approve it or toss it, and then they will work on finishing out the instrumental parts.

A great example of that was the third year they participated in Birdy's. Mike had thought of a line, he brought it to Adam. Adam wrote lyrics for it, they brought it to practice and finished it. The next day they played it in their set for finals and ended up winning the competition that year. "Nobody believed us, of course, but it really was all put together the day before. It's actually a song that we still play regularly today, too," Mike.

Looking into the future

Competing in battles has been a solid way for Audiodacity to build themselves as a band. They learned early on that the connections and the experience are far more important than placing. "The best thing to get out of it, whether you place or not, is that it is an opportunity. You are meeting all these people, listening to other bands play, and making connections that you would not have gotten any other way. You make friends with the bands and you play shows with them down the road. It is a chance to grow and be on better bills," Ben. Following this line of thinking, the band has made connections with studios like Sweetwater and Soundspace, as well as with tons of bands and venue owners. They have even ended up playing in music festivals through connections made at a battle.

Another focus of the band is currently playing more shows in the festival circuit. They may or may not participate in Summer Camp again this year. They plan on playing at Resonance again, a festival based in Pennsylvania. They have been exploring the possibility of playing Good People, Good times. If Disc Jam ever was restarted, they would like to play there. Another festival they have been exploring is Woodlands, an Umphrey's McGee festival in South Carolina.

Audiodacity has a growing social media following and fan base. They would really like to continue that trend and to create a culture within the fan base. The band would like their fans to feel like they really know them and like they are a family composed of the fans and the band. They take inspiration from bands like Pigeons Playing Ping Pong in that sense, they would like to create something similar to The Flock for their fans, but they also recognize that it will have to be something that develops organically. "We are people, come and talk to us after shows. I never want to get outside of that. We are still just people. We aren't better than anyone. We can't do this without our fans; the only reason we are anything is because our fans come and see us play, and they like our music".

Getting to know the band

Audiodacity is passionate about making music and turning it into a lifelong career. While Kyle and Cecily have already been able to make their full-time jobs revolve around music, the other members are all still working full time to support the band. "We all have our nine to five jobs just to have the money to do this. At this point it is a business and we need to have the capital to do it. You gotta do what you gotta do," Adam.

Kyle teaches at The School of Rock in the Fishers location, he works at Piano Bar in Broad Ripple, he is in the house band at Tin Roof, and he also plays in cover bands around town. Kyle currently plays in five active bands. Cecily teaches a jazz band at Carmel high school, she teaches clarinet at Noblesville high school, and she also has a studio at her house where she sees up to 40 students a week for lessons. Cecily also plays fill-ins and looks for any gigs she can to play saxophone.

Cody is in the aquarium business. His father started the company 40 years ago, and now he is taking it over by leasing and maintaining aquariums all over the greater Indianapolis area.

The eventual goal is for Audiodacity and music to be the members full-time job as well as a source of income." If I could make the same amount of money that I make now, which is not a lot of money and just play music all the time, that is the current definition of what making it is. We aren't trying to go out and be supermassive rock stars that are super famous. That doesn't really fit the definition of making it. If you can make a career out of just playing music all the time, you've made it," Ben.

The musical guilty pleasures or something each member thinks will surprise you that they listen to:

"Please if you think of a name for our fans, send it to us on social media, we need one."

For the Fans: "We appreciate everything you have done for us. We love that you care enough to listen to our music and we hope to live up to your expectations when we play. And you will get new music very very soon. Singles included. We are planning to release our much anticipated sophomore album in 2020."

For the Bands: "We should all be very happy and proud to be here. For all the bands that have been involved with this, it has been a very high class event, everyone has handled it well. We should be proud of ourselves. It's going to be an awesome night. It has not been easy; it's been the toughest Battle we have ever been in. So to make it this far you deserve respect. There is no bad blood and no bad outcomes of this finale."

"Huge thank you to Indianapolis for always being there for us. They have made our dreams come true over and over again. We have surpassed everything we ever thought would ever be possible. Thank you."