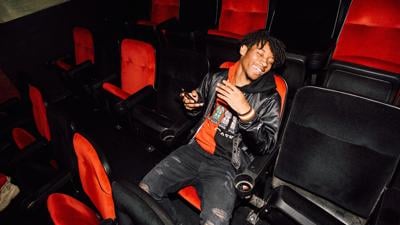 “People call me a producer, but I really only make beats because I rap,” Fresh Duzit says. “And then, people started getting on my beats because they heard my music.”

In recent years, Fresh Duzit has found a great deal of success, especially with making beats. As a matter of fact, he was responsible for the production work in NLE Choppa’s song “Camelot,” which is now certified platinum.

“’Camelot’ came about because I’ve got a friend that works at a label, and they were trying to sign Choppa,” Fresh Duzit says.

In addition to NLE Choppa, Fresh Duzit has also worked with several other noteworthy rappers, including Blocboy JB and Moneybagg Yo. This said, he’s no stranger to Memphis, where both of the aforementioned artists are from.

Fresh Duzit has also produced songs for artists like NFL Toon and Teejayx, with more big collaborations on the way.

"Before the year is over, I'm working with NBA YoungBoy," Fresh Duzit says.

On a local level, Fresh Duzit has produced several tracks for Indy-based rapper Parris LaDame, including her much-loved hit “Hang Up.”

“She thinks outside the box,” Fresh Duzit says of LaDame. “You never know what to expect. Everything she does with the beats I make is always totally something from left field.”

As for rap projects of his own, Fresh Duzit has stayed quite busy as well, churning out a constant slate of material. In 2019, he dropped a pair of projects titled I Told Yall So and Top 10 Not 10. And on March 17, he will release his latest album titled Off The Wop.

“It’s based off of Micheal Jackson’s Off The Wall album, since we’re both Indiana stars,” Fresh Duzit says of his forthcoming album. “The CDs in my hand [on the album cover] are Eazy-E’s debut Eazy-Duz-It, where I got the inspiration for my name. Eazy’s character and mindset reminded me a lot of myself and the stuff my dad taught me.”

When asked what advice he has for aspiring rappers and producers in the Indy area, Fresh Duzit lays it out simply.

“I’d just tell them to lock in and get focused — find your motivation so you don’t lose it,” he says. “You gotta treat your music like a job. Whatever you’re trying to do, you gotta be on it 24/7.”

The Sophisticated Street Sounds of Skypp

The Never-Ending Sound Quest of Willis

The Beat Goes On: How You Can Virtually Support Indy Musicians From Your Home

From vinyl sales to virtual streams, Indy artists can use your support more than ever right now.

Getting Weird with Bedforms

Gabriel Stonerock and Jenat Laraine discuss all that led up to the Indy band’s second full-length album.